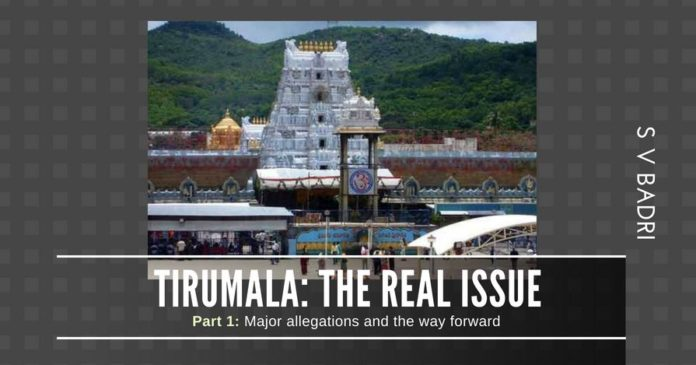 I lost my father when I was barely six. My maternal grandparents brought me up along with my eight siblings. My maternal grandfather, late Sriman Kalyanam Iyengar gave the Tirupati Laddu to the world. I grew up in that Mandir. Long before the Laddu Mirasi was abolished, I had access to all the corners of the Mandir, except the Garbha Griha. Growing up in such a divine environment also gave me a closer view of how the system worked. The Archakas were always our close family friends since my Grandfather’s time. The Gamekars and the Mirasi Dikshitars were my Grandfather’s allies. The families of the four Pradhana Archakas have been family friends for three generations now. The purpose of writing this article was born from the deep anguish that arose out of the following:

This cannot be viewed as just the problem of the Pradhana Archakas and their compulsory retirement by the Tirumala Tirupati Devasthanam (TTD) under the TDP Government. This is the problem of Sanatana Dharma.

This cannot be viewed as just the problem of the Pradhana Archakas and their compulsory retirement by the Tirumala Tirupati Devasthanam (TTD) under the TDP Government. This is the problem of Sanatana Dharma. This article does not deal with whether the compulsory retirement of the Pradhana Archakas is correct or not. In my opinion, it is WRONG and that can wait for a separate article. But, there are certain things that the public should know.

There are 4 Pradhana Archakas of the Tirumala Balaji Mandir. They come from 4 families that have served the Bhagawan for 39/40 generations. These families are:

They offer their services on a yearly rotational basis. They are not employees of the TTD. They don’t get paid a salary to discharge their religious duties. They were performing as a Kainkaryam to the Bhagawan. For many years, they were getting “Rusumu” as Income, which was their hereditary rightful share of the Pujas performed. When the proposal to abolish this Archaka Mirasi system was introduced, they fought valiantly in courts and took their case to the Supreme Court (SC). As a step to mediate between the Archakas and the TTD, the then E. O. Sri I Y R K Rao and the Dharmika Parishad (There is no Dharmika Parishad now) made the proposal that the Archakas should withdraw their Petition in the Supreme Court and as their existing rights and honour was upheld by the SC which was under Section 142 and the Amendment was made by the AP legislature in 2007. The SC allowed the withdrawal of the petition with a note to the TTD Board that they should hear out the Archakas. This hasn’t been heard till date. Under this mediation, the Pradhana Archakas even agreed to forego the “Rusum”, which was a princely sum, to retain their right to perform the Archaka Kainkaryam as the Pradhana Archakas of the Mandir. Many would be surprised to learn that these Pradhana Archakas are not employees, hence do not get any salary/ wages/ bonus/ leave/ medical benefits that the TTD pays to all its secular employees and other non-hereditary Archakas who have accepted employment with the TTD. Pradhana Archakas did not want to be employees. The Pradhana Archakas were paid a token “Sambhavana” based on the days and the daily rituals/ kainkaryam they offer.

Now, let me get to the purpose of this article:

There were two clear attacks on Hindu Dharma in the last two decades. The first one was on the Kanchi Matham. The Hindu Samaj’s response can best be described as muted. Barring individual efforts by Hindu Bhakts, there was very little to write on the response from the so-called Hindu organizations, Sadhus, and Sants. We let down the Acharyas. The Acharyas are NOT individuals. They are Institutions. Collectively, as Hindu Samaj, we let down Institutions that were built successively for 2500 years of service to Sanatana Dharma. We failed the Sanatana Dharma.

The second one was the attack on the Pradhana Archaka of the Tirumala Tirupathi Mandir, the Mandir’s rituals and its wealth, another instance where we are seriously found lacking in response as Hindu Samaj.

When someone as learned as Sri Ramana Dikshitulu (He is not only a Ph. D. in Molecular Biology, the learned Pradhana Archaka, but also an expert in Vaikanasa Agama, the tradition followed in the Tirumala Mandir along with Pujas as ordained by Srimad Bhagavad Ramanuja), raises concern on issues like interference by the Politicians, Board Members, TTD employees in the day to day rituals, one needs to take note of and find ways to rectify the situation, if something is seriously wrong as alleged. When he says that the yearly audit of jewellery is NOT being carried out, should we turn a deaf ear and carry a smear campaign on him, slap defamation cases on him or look into it with utmost sincerity?

Let me come to the major allegations made by the Pradhana Archaka:

Here is why this question is relevant. When a new donor wants to make an ornament for the Bhagawan and approaches TTD, based on the budget of the donor Bhakt, the management conveniently gives him a design of an existing old traditional jewellery. Thus, a second and more recent jewel starts making its appearance on the Bhagawan while the age-old precious jewel is supposedly sent back for safe custody to the vaults. Are both such jewels available and safe?

[GHHF] Ghazals with Dr. Ghazal Srinivas on “Mana Gudi Pilustondi” and other songs