“This is the ancient land, where wisdom made its home before it went into any other country… Here is the same India whose soil has been trodden by the feet of the greatest sages that ever lived… Look back, therefore, as far as you can, drink deep of the eternal fountains that are behind, and after that look forward, march forward, and make India brighter, greater, much higher, than she ever was.” Sri Swami Vivekananda.

Dr. Ghazal Srinivas, Brand Ambassador for Global Hindu Heritage Foundation and SaveTemples has organized a timely and appropriate Symposium on the Protection of Hindu Temples and demanded that the government should repeal the Endowment Act and handover the management of the Temples to Acharya Sabha. He mentioned that government has no moral or ethical reason to take over these Temples lands that were donated by our forefathers to make sure that the Temples are maintained and the Priests are properly paid and all the festivals are done as per our scriptures.

On behalf of GHHF and SaveTemples, he made the following recommendations to the government to ensure that the Hindu Temples are properly maintained as per our scriptures. GHHF, Swami Paripoornanada and Dr. Srinivas were advocating the protection of Hindu Temples, Protection of Cows and welfare schemes for the Priests.  This Symposium is being conducted first in Nellore and hope to repeat it in other cities.

Nellore: Global Hindu Heritage Foundation and Save Temples Organisation advised the government to bring endowments lands and other assets under the control of Seers of Holy Peetams to prevent misuse of temple properties. Functionary of the foundation and Ghazal exponent, Dr Ghazal Srinivas, made this observation while reminding that government does not have any say in the properties belonging to churches and mosques.

Addressing large number of temple priests during Archakas’ Convention held at Town Hall here on Saturday, the Triple Guinness World Record Holder appealed the government to extend NTR Arogya Sree scheme to Archakas. He also suggested that the government hand over the management of temples with less than Rs 2 lakh revenue to the priests working in such temples. Dr Srinivas has underlined the need for measures to protect the temples, priests and the cows while dwelling at length on the link between the Indian tradition and culture with the temples.

“Can we imagine a country without temples and cows? There were only three per cent sick people among the entire population when people were drinking cow milk and using cow ghee, now 81 per cent of the population is suffering with one ailment or other after ignoring cow products. Scientists have already found medicines for cancer using cow dung and urine, but we are not realising this and watching silently when cows are transported to slaughter house.” Dr Srinivas alleged.

He lamented over government attention towards revenue-earning temples and looking at them as ATM Centres while ignoring the shrines that lack funds for daily rituals. “Even the devotees especially youth also approaching the God for materialistic benefits due to lack of guidance by the parents,” he added pointing to the students bee lining to Chilukur temple for Visas. 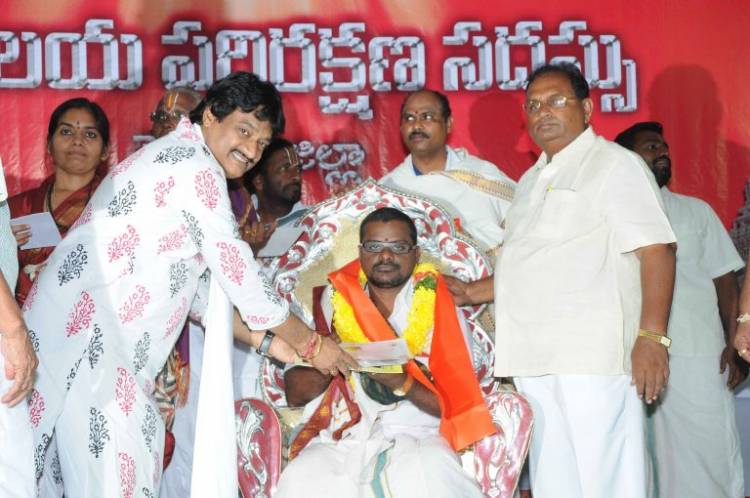 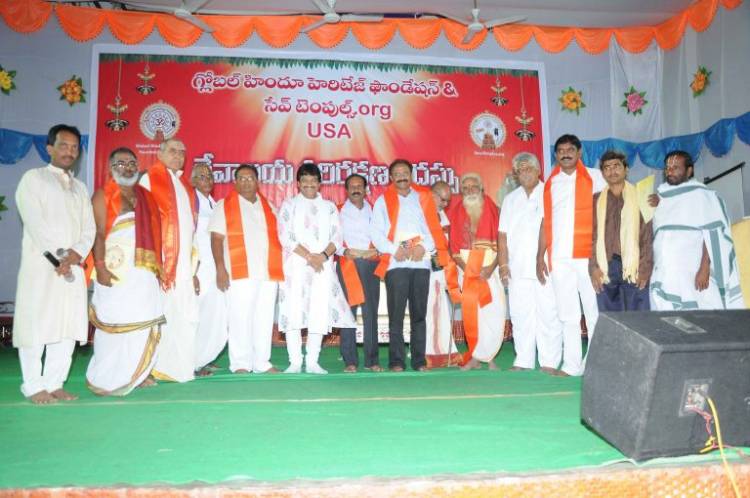 More photos you can view at

Speech by Dr.Ghazal Srinivas at "Symposium on Protection of Temples", Nellore

Symposium on Protection of Temples, Nellore-Speech by Sri Balaram Naidu on Traditional Arts 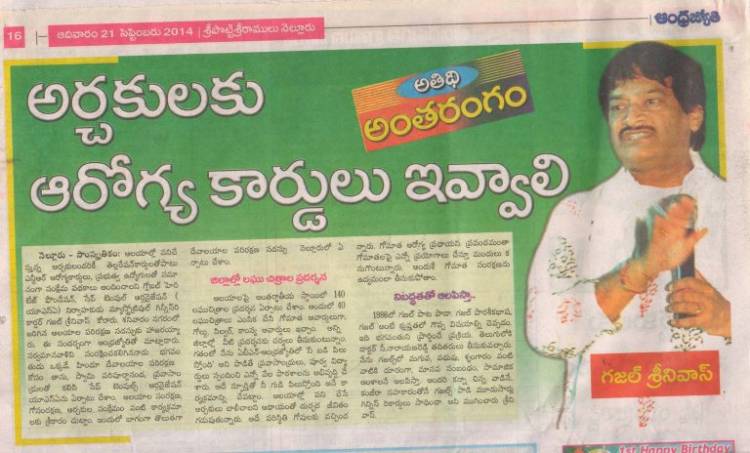 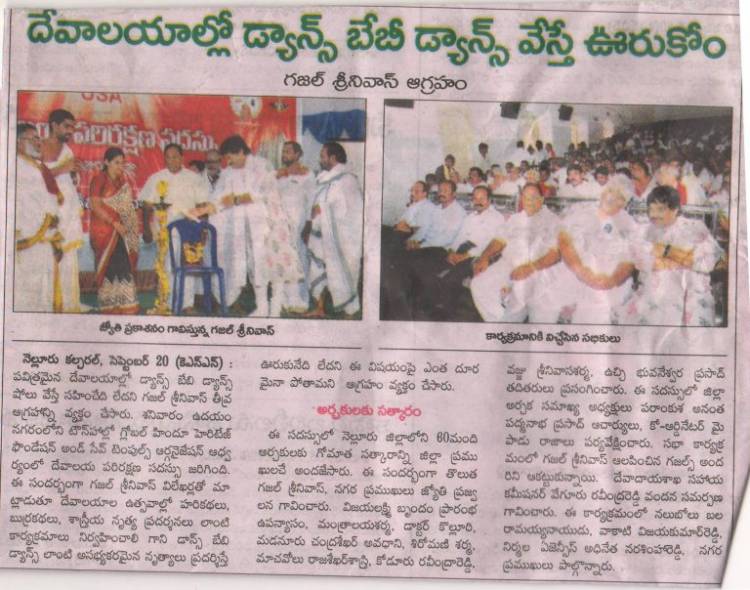 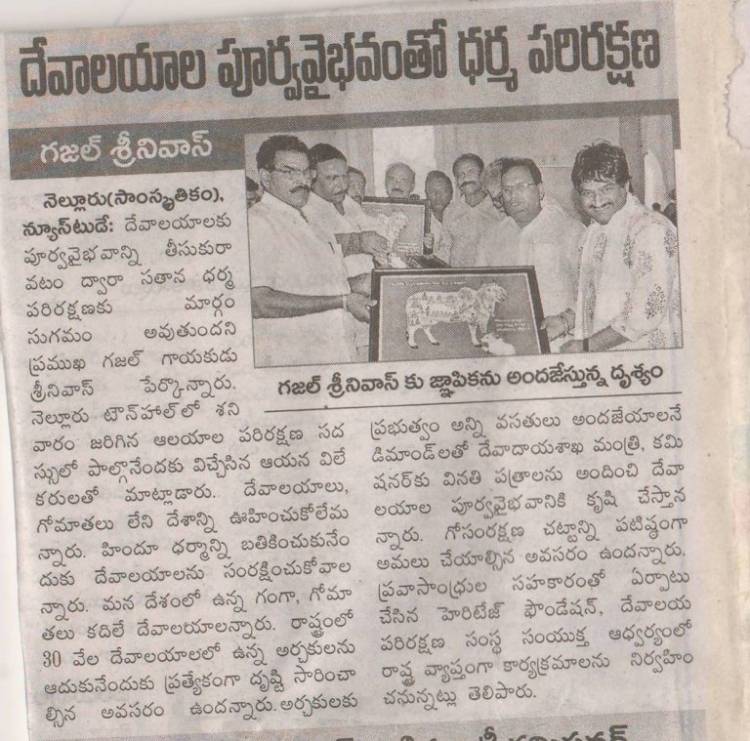 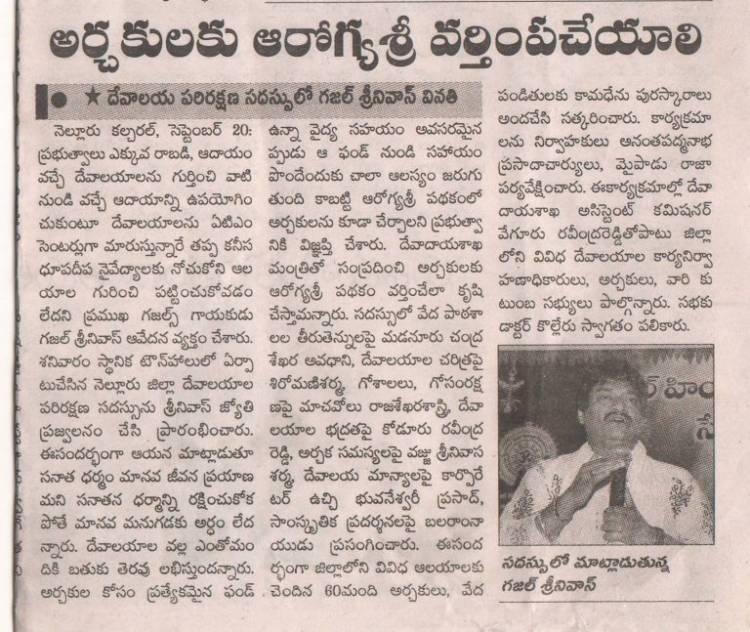 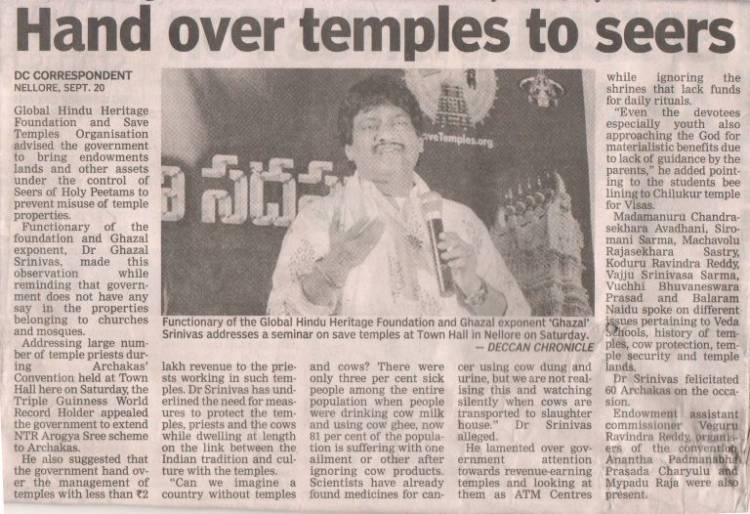 As many of you know that SaveTemple Office was opened in June 2012 in Hyderabad.  Office is located in Khairatabad. Four full time employees are working on the update of our website, Aalayavani Web Radio, Aalyavani magazine, conducting various activities to preserve and protect Hindu Temples and Culture. Our budget is approximately 2 lakh rupees per month.  We request your generous donation to conduct activities to promote unity among Hindus and restore the glory of Hinduism.

[GHHF] In Tirupati, Annadanam is being done for folks on the streets and in the poorest neighborhoods

Should a Sanyasi or a Swami Enter Politics? Sri Ganapathy Sachchidananda Swamiji’s Powerful,Forceful, and Timely Answer