ALAMPUR, FEB. 27. Jogulamba Devi temple at Alampur, one of the 18 Sakti peethams in Indian sub-continent, including Sankari Devi temple in Sri Lanka, has been reconstructed after 615 years. According to historical sources, the temple was razed to the ground during Muslim invasion in 1390 AD. The local people put up a fierce resistance and killed the invaders and moved the main idol to the nearby Balabrahmeswara temple. Since then, the idol had been worshipped in the secluded place in the temple. 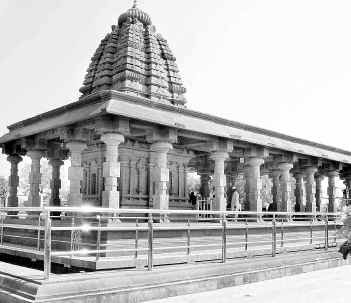 The newly-constructed Jogulamba temple at Alampur.

Alampur, 20 km from Kurnool, which is known as `Dakshin Kasi' flourished as spiritual and education centre in ancient times.

The Chalukyas of Badami, mainly by the initiative of Pulakesin-II put up a number of temples in and around Alampur in the 7th and 8th centuries. At Alampur alone, Chalukyas built nine temples devoted to Navabrahmeswara and Jogulamba.

Of them, eight magnificent temples of Navabrahmeswara survived but the temple of Tarakabrahma could not be traced.

The Jogulamba temple was reconstructed at the same place where it stood. The temple was rebuilt in the same way it was described in the `Rasaratnakaram' of Nityanatha Sidha of 12th century AD. Sankaracharya was believed to have installed `Sri Chakra' at Jogulamba temple, which is not available now.

Since the Alampur temple complex was declared a heritage site, the supporters of Jogulamba temple had a difficult time to convince the Archaeological Survey of India and the State Government to revive the temple.

The temple was designed to match the Chalukyan architecture so that the new temple would fit into the group of temples.

The Endowments Department, led by the former Commissioner, Ajay Kallam, took initiative to raise funds for reconstruction of the temple. The temples across the country donated money for the temple while Srisailam Devastanam adopted it to ensure uninterrupted rituals.

Giving the reasons for failure to revive the temple in the last 600 years, Sanskrit scholar, historian and epigraphist, Gadiyaram Ramakrishna Sarma, has analysed that political uncertainty prevailed during the medieval age delayed the reconstruction of the temple.

GHHF Yearly activities and Accomplishments for 2016