Organized Dr. Subramanian Swamy's Lecture on the Repeal of Endowment Act in Chicago

CHICAGO: A group of Indian Americans led by Prasad Yalamanchi and Ajay Jain hosted a reception early this month in honor of Indian parliamentarian Dr. Subramanian Swamy (PhD Economics – Harvard) at Hanuman Mandir in Glenview. It was attended by a large number of Chicago elite, admires and guests. Dr. Swamy, who was on a 14 day tour of the United States, addressed a large gathering on various issues revolving around the health of the Indian economy, the vision of the Bhartiya Janata Party, his fight against corruption and the relevance of Hindu identity.
Ajay Jain and Sudha Yalamanchi, the program coordinators for the afternoon, welcomed all the speakers and enumerated the rules of engagement for the audience. Prior to the commencement of the event, Ajay Jain called for one-minute silence in the memory of late Narain Kataria, the pioneer of the Hindu unity movement in the USA. Dr. Swamy was welcomed by the chairman of GHHF, Prasad Yalamanchi, who narrated his personal experiences with Dr Swamy’s tireless efforts as an anti-graft crusader and an upholder of democracy during the 1977 National Emergency.
Dr. Swamy, who is a six- time member of Parliament, expressed his views on how leading macro-economic practices can be embraced by India in order to advance in its quest for becoming a global superpower. Speaking from his personal experience as a former minister of commerce and industry, he listed some looming economic, political, and social threats that await India and offered targeted measures to thwart them. 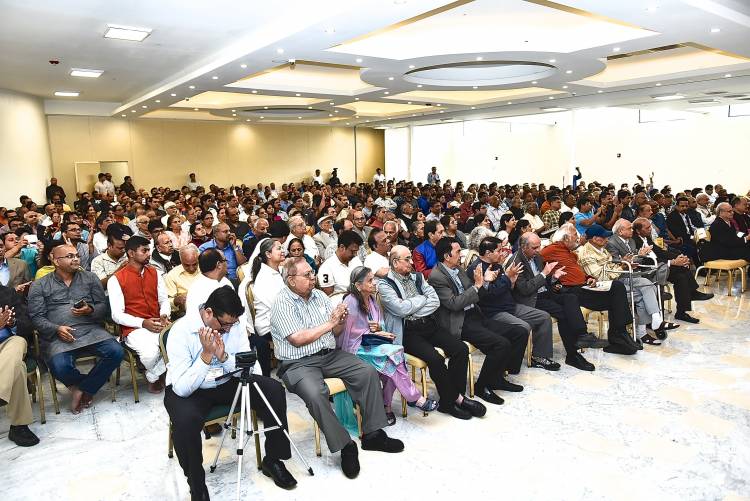 He touched upon the history of oppression that Hindus had to endure through foreign invasions and how the same challenges have come to haunt India in the form of seemingly innocuous yet conspicuously pernicious demographic shifts. A former professor of economics at Harvard, the articulate Dr. Swamy received overwhelming applause and ovation throughout his hour long speech. His analyses on the interplay of Hinduism and modern society was well received by all sections of the 500+ members of the audience.
The former minister of law and justice reassured the Indian community that he will continue to fight for the best interests of the nation and will strive to accelerate the proceedings of longstanding high-profile cases like National Herald, Ram Janmabhumi in Ayodhya, Sunanda Pushkar, etc. Dr. Swamy particularly emphasized the urgency of repealing the archaic and regressive Hindu Endowment Act. S. Vemuri, former national president of OFBJP, who lead the Q and A session, noted that a flood of questions kept pouring in from the audience throughout the afternoon. In his final remarks, Prasad Yalamanchi thanked not only the guest of honor, Dr. Swamy, but also the large group of supporting organizations, speakers, and volunteers who made the event possible.

Booklet and the supplement explaining the issue providing evidence

Protest against leasing of Karnataka choultries

[GHHF] Annadanam on the occasion of Hanuman Jayanti in Chittoor