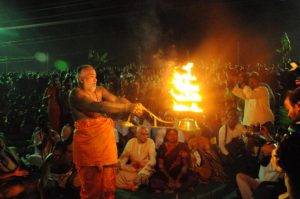 As per the GO issued by the Endowment Department of Andhra Pradesh, all the concerned officials are given full responsibility in organizing the offering of Arthi to the sacred rivers in Andhra Pradesh - Krishna, Godavari and Tunga Bhadra. As many of you may know that Dr. Ghazal Srinivas of GHHF/SaveTemples approached the department with this idea. Following the discussion as to the viability of the imitative, the Department accepted to organize a program called “Punyanadi Arthi” (Arthi to Sacred Rivers) on Karthik Purnima day (November 28, 2012).  The credit goes to Sri C. Ramachandraiah, Endowment Minister; Smt. Chitra Ramachandran, Chief Secretary to Revenues (Endowments); Sri Balaramaiah, Endowments Commissioner; and Ghazal Srinivas to work together to get the initiative off the ground to make it into a grand successful event.

More than 25 places on the banks of these three rivers participated with devotion and dedication. Arthi offering to sacred rivers was sight to see. It was a moment to participate. It was a scene to behold. It was a panoramic view to cherish. Lakhs of people thronged the Ghats of sacred rivers with colorful clothes to participate in this historical event ever conducted, to take bath in holy rivers, offer deepams in the rivers as a way respect for all God’s creations, especially on Karthik Purnima day. It is almost impossible to imagine the enthusiasm of the Hindus to follow their age old, rich, meaningful, and evocative custom of celebrating the most auspicious month of the year. Although only 8 places were selected by the Endowment Department to celebrate the Karthik Purnima day, many places across the state experienced similar excitement, fervor, and zeal as large numbers of Hindus engaged in the festival of respecting the holy water and sacred rivers that sustain the life of humanity. Many scriptures talk about the sacredness of waters.

Water plays a very important and significant role in the lives of all Hindus, their culture and traditions. Mahanarayana Upanishad further observed thus:

“May this water cleanse my physical body that is made of earthy substances. Thus purified, may the earthy body purify me, the Soul within! May this water purify the guardian of the Vedas, my preceptor! May the purified Vedas taught by the purified teacher purify me! (Or may the Supreme purify me. May the water purified by the Supreme purify me)! My defilement, repast on prohibited food and misconduct if any, and the sin accruing from the acceptance of gifts from persons disapproved by the scripture – from all these may I be absolved. May the waters purify me! Hail! (XXX-1-2).

This kind of initiative will instill pride among Hindus with respect to their religion as they come to know the significance of these festivals and the practices associated with them. Hindus have a long history of celebrating wide variety of festivals that have special significance.  No religion will survive without practicing certain customs and traditions; and without proper knowledge. Performance of daily rituals and festivals instill certain type of discipline and develop moral compass that will guide the individual to lead a pure and pious life. Once we fail to observe and practice these customs, we tend to destroy the very fabric of Hinduism. By engaging in the performance of these customs, we will be able to sustain and reinforce our faith in Hindu way of life. The festivals are imbued with special and deeper significance. They enforce certain set of ethical standards - that means what is right and wrong.  These standards eventually guide them to fulfill their responsibility to their society with respect to their rights, dharma (duties), obligations, and virtues.  Do what is good for the society because good deeds create righteousness in the society.  Hence, one of the Upanishads states: “Whatever deeds are faultless, these are to be performed- not others. Whatever good works have been performed by us, those should be performed by you- not others.”

Why Karthik Purnima is important?

Please go to our article on the significance and importance of Karthik Masa, Karthik Purnima, holy dip in the sacred rivers, offering Arthi to Sacred Rivers, and conducting pujas, by clicking on the link:

Newspapers covered the “Punyanadi Arthi” program extensively. We will list some of the major activities in some of the sacred places where Karthik Purnima celebrations were conducted:

The Highlights of the events are:
1)     In Bhadrachalam, a special stage was erected in Godavari River that was used to conduct all the ceremonies.
2)     A special Chakra Arthi was offered to Sacred Godavari River
3)     Devi in Sri Someswara Swamy Temple in Kadapa was decorated with 100,000 bangles.
4)     In Vijayanagaram, Lord Shiva was decorated with 50,000 rudrakshas.
5)     Chitra Ramachandran, the Chief Secretary for Revenues (Endowment) attended and offered Arthi at Rajahmundry Festival.
6)     Dr. Ghazal Srinivas attended the Arthi festival in Rajahmundry.
7)     Sri Tanikella Bharani, writer and movie actor, offered Aarthi to Godavari in Rajahmundry.
8)     Minister Botsa Satyanarayana and wife offered Aarthi to Krishna River in Vijayawada.
9)     Uma Bharthi, former Chief Minister of Madhya Pradesh, offered Aarthi to Godavari at Dharmapuri in Karimnagar District.

River Godavari that washed off the sins of the great rishi Gowthama had new look with the congregation of large number Hindu devotees, who took holy dip in the river and performed various pujas. They started to assemble in the early hours on Karthik Purnima day and offered Arthi to Goddess Godavari requesting her to protect them. In Bhadradri Ramalayam, Temple authorities conducted Krithika deepotsavam and Purnima pujas on a grand scale.

They conducted special homas in a specially erected yagasalas. Also offered Arthi to MULA MURTHY (Lord Rama), Goddess Lakshmi, Mother Godavari, Lord Hanuman, Utsav Murthies, Alwars, and their attendants. Thousand of Diyas (Deepas) were lit according to the Agama Sastra guidelines and decorated the Temple premises. Even all the houses were bedecked with decorative lights. All these lights are lit to illuminate the lamp of wisdom to remove the darkness known as ignorance.  Procession started from the Temple to the Godavari River with may people dancing and doing Kolatam and reached by evening.  The whole atmosphere was filled with spirituality. Devotees were fully immersed listening to Ramadas Kirtans. They witnessed the offering of flowers as they performed 108 arthis to Godavari. May devotees offered kumkum, turmeric powder, bangles, blouse pieces and other items to Goddess Godavari.

Bhaktas (devotees) in large numbers participated in various places in and around Machilipatnam such as Manginapudi Beach, Peda Kallepalli, Hamsaladeevi, Balive, Iluru, Muktyala and others. Authorities had made arrangements for the devotees to provide adequate facilities. The devotees started to assemble from the early morning to take a dip in the river. As the numbers were increasing, remote cameras were installed to witness the Arthi offering to the river. As many as 40 thousand people took dip in the holy waters. On the banks of Ocean, thousands of ladies performed samuhika (collectively) pujas. Sri Panduranga Swami Temple in Chilakalapudi witnessed long lines of devotees standing to have darshan of the presiding Deity. Thousands and thousands of devotees took bath at Datta Ashram of Sri Ganapathy Sachchidananda Swamiji. In the Ashram 12 wells were consecrated to take bath for people with certain ailments. On this Karthik Purnima day, the Ashram was buzzing with thousands of devotees taking bath, using water from these wells.

In association with Buddhavarapu Charitable Trust, Endowment Department arranged the Godavari Arthi festival on Rajahmundry Pushkar Ghat. Radham bedecked with Utsav Murthies of Sree Veera Venkata Satyanarayana Swamy from Annavaram that was brought to the Ghat attracted thousands of devotees who competed for darshan. The Arthi festival that started at 4:00pm included the chanting of Vishnu Sahasranama Stotram and Lalitha Sahasranama Stotram. Trustee of Budhavarapu Charitable Trust performed Datta Lakshmi Kalyanam on a specially built stage for the occasion. Speaking on the occasion, Sri Tanikella Bharani, writer and movie actor, said that offering Aarthi to Godavari is as good as offering silk sari.

Pancharama kshetralu have witnessed unprecedented number of devotees attending Shiva Temples. Samarla Kota, Draksharamam, Bhimavaram, Palakollu and other places resounded and resonated with Namah Shivaaya. Since the announcement that Karthika Purnima will start late evening on Tuesday itself, countless number of ladies started offering Aarthi to Godavari Mata from midnight.

It was feast to eyes of the devotees to witness the offering of Arthi to the sacred Krishna River, popularly known as Krishnamma.  Sri Durga - Mallikeswara Swamy Temple conducted Arthi in Durga Ghat with chanting of Vedas. Special Arthis such as Ekaarthi, Nakshtra Aarthi, Naga Arthi, Simha Arthi, Kumbha Arthi, Pancha Arthi, and Karpura Arthi were offered to the sacred Krishna River.  Minister Sri Botsa Satyanarayana and his family participated in the festival. The procession carrying all puja items and saris from the Durga Devi temple reached the ghat in the evening. On the way 25 people who were deputed by TTD performed Kolatam amidst traditional sannai music. Devotees offered Arthi plates, specially prepared with banana leaves, into the sacred Krishna River.

Sri Gnana Saraswathi Devi Temple is located on the banks of River Godavari. Thousands of devotees flocked the Basra Temple area, took a dip in the holy river and offered Karthik Deepalu. Special Abhishekam and pujas were performed to Lord Siva. Many of the devotees took their children to do Aksharabhyasam in front of the Goddess of Learning.

Telugu speaking people can enjoy reading the news; everybody can enjoy looking at the pictures that captured the festive mood of the devotees and the arrangements.

Donations
As many of you know that SaveTemple Office was opened in June 2012 in Hyderabad.  Office is located in Khairatabad. Dr. Ghazal Srinivas and his family is coordinating and managing the office activities. Four full time employees are working on the update of our website, Aalayavani Web Radio, Aalyavani magazine, conducting various activities to preserve and protect Hindu Temples and Culture. Our budget is approximately 2 lakh rupees per month.  We request your generous donation to conduct our activities.
Please DONATE. Your donations are appreciated to continue the work.
NOTE: GHHF is exempt from federal income tax under section 501 (c) 3 of the Internal Revenue code.    Our tax ID # 41-2258630
Please send your tax-deductible donations to: Global Hindu Heritage Foundation, 14726 Harmony Lane, Frisco, Texas 75035
You can go to https://www.savetemples.org and pay by PAYPAL.