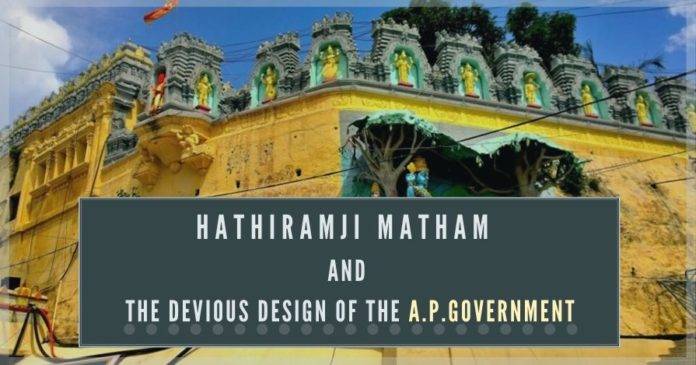 The Mahant of Hathiramji Matham has been suspended again. What makes these successive governments take such drastic steps? For vast tracts of land? For the Jewellery of the Tirumala Mandir? Or for alleged land-deals by the Mahant?...

Now Hathiramji Matham has been appropriated so the government could have absolute control over the Mandir. There are some puzzles around the devious plot of the successive governments.

Mahant Sri Arjun Dass Ji, the Mahant of Hathiramji Matham has been suspended again. First by the Naidu Government on 10-07-2003 and now by the Jagan Government on 28-01-2020. What makes these successive governments take such drastic steps? Is it for the control of vast tracts of land? The Jewellery that never was under the control of the Matham since the takeover of the Tirumala Mandir by TTD? Or the same alleged land-deals by the Mahant which was also one of the reasons for his suspension by the earlier Government?

The reason for suspending the Mahant is different. The Government won’t admit it. The real reason is to retain the Government control on the Mandir, permanently. If Tirupati is not returned to the rightful Vicharanakartas, Kainkaryakartas, Tirupati Jeeyars, Archaka Mirasidars, etc., the Hindu Society can forget the return of its Mandirs to the society. I have in an earlier article explained how the Naidu government laid the foundation to this by retiring the Pradhana Archakas from the 4 families that served the Bhagawan for 40 generations[1]. The Archaka Mirasi, Gamekars were earlier abolished by the Government.

The Tirumala Jeeyar has been rendered functionless except as an ornamental-head during His daily Jeeyar darshan during Sathumurai and other major Utsavams. Now Hathiramji Matham has been appropriated so the government could have absolute control over the Mandir. Before I go into piecing together what I see as the devious plot of the successive governments including this, let me give a background of Sri Hathiramji Matham and the connection it has to the Tirumala Balaji Mandir.

Sawal-e-Jawab is a unique record published in Fasli 1213, ie., 1801-02 C.E. in question & answer format in Telugu. An English Translation of a part of this book was made by Sri V.N. Srinivasa Rao and was published in 1950. Sri Srinivasa Rao laments in the preface that “So far no authorised account containing the entire material has been made available to the public by the Devasthanam authorities. The Government has been equally reticent about the publication of the wealth of material that should be available with them, not only this, they have been refusing access to these records even to research scholars”. I have managed to get a xerox copy of the book in Telugu recently.

The various rulers of the territory in which the Mandir was situated:

While the book doesn’t record the exact year of the construction of the Mandir, it gives the names of the rulers and the number of years of their reign, under whose patronage the Mandir was. It lists out the kings right from the Mahabharata War, from Parikshit to the Moghul rulers, East India Company and the number of years the Mandir was in their respective control. It might come as a surprise to most readers as it did to me that the Mandir was in shambles and was first renovated and consecrated by Janamejaya, the son of Parikshit. The book lists the descendants of Parikshit and their total rule for 2663 years, 20 Chola kings, Salivahana I, 12 each of Ven(Hun?), Kotanan and Pandya Kings, 14 Yadava Kings, Oraganti Pratapa Rudra, Balle Rao (Ballala?), Ana Vema Reddy, 26 Raya Kings (including Sri Krishnadeva Raya), 10 Mohammedan rulers. A list of 119 rulers totaling a reign of 4902 years.

“Around 1500 CE, Hathiram Bavaji, a North Indian Bairagi had Bhagawan Balaji come in his dream and beckon him to Tirumala. Hathiram Bhavaji arrived at Tirumala and instantly became an ardent devotee of the Bhagawan Venkateswara.”

The Nawabs and the East India Company:

The Mandir came under the Nawab of Carnatic. The Nawabs collected an annual income of TWO LAKH RUPEES from the renters and excess income of the Mandir in the 1700’s. Sawal-e-jawab records: The last of the Nawabs, “Muhammad Ali, the patron and protégé of the East India Company assigned the revenues of the Temple to the East India Company for restoring his authority in the Carnatic as a sure source of discharging his dues to the Company”. This was between 1744 and 1750 C.E. Muhammed Ali also had assigned the country around the Mandir to East India Company and on 31st July 1801, the direct management of the Mandir was taken over by the East India Company. (Another version says: On the close of Fourth Mysore War in 1799 and after the death of Mohammad Ali in 1795 and his son in 1801, the company made an agreement with Mohammad Ali’s second son, Azim-ul-Umra, in July 1801 by which he handed over the entire political sovereignty over the Karnatic to the East India Company in return for a fixed stipendiary allowance). Thus from 1748 i.e. middle of the 18th century, the East India Company came into possession of the income of the Tirumala Temple of Sri Venkateswara and later it took over the direct management of the temple at the beginning of the 19th century when they arrived at an agreement with Mohammad Ali’s son[2]. The East India Company as Sri Srinivasa Rao writes in the Preface of his book: “The first collector of North Arcot District was Mr. Stratton, who was then styled Collector, Western Poliams, made exhaustive inquiries not only about the territory entrusted to him but also about the history, tradition, and resources of the Temple. He asked a series of questions on all aspects of its administration and answers were furnished by those in the actual management of the affairs of the temple and information gathered from these questions and answers is locally known as the “Sawal-e-Jawab” account. He constituted the country around Tirupati into a Taluk and the Tahsildar of Tirupati was in direct management of the Temple which was expressed by the term “Amani” as against the previous practice of farming out the revenues to renters annually”.

How the head of Hathiram Ji Matham come to be Dharmakartha/ Vicharanakartha of the Mandir:

A Judgement in O.S. No. 51 of 1937 dated 15-6-1942 on the file of Subordinate Judge, Chittor records that after the East India company appointed the Tahsildar of Tirupati to manage the mandir, and on account of the dispatch of the Court of Directors that the Government should not have anything to do with Temples and the places of Religious resort of the Hindus, the management of the Temple was handed over to Sri Mahant Sevadoss, the then Mahant of the Hathiramji Matham. (This was during East India Company, British Christian rule, while our secular governments/pseudo-Hindu governments indulge in every dirty trick to takeover new Mandirs and to hang on to existing ones) Mahant Sevadoss executed a Vicharaka to the Government. The Government also granted a sannad to Sri Mahant Sevadoss Ji transferring the management of the Mandir to the Sri Mahant of the Hathiramji Mutt who was to be called the “Vicharanakartha” (Dharmakartha) of the Temple.

1. The views expressed here are those of the author and do not necessarily represent or reflect the views of PGurus.

Response to ill-conceived, ill-timedHearingsin US Congress on “The Plight of Religious Minorities in India”