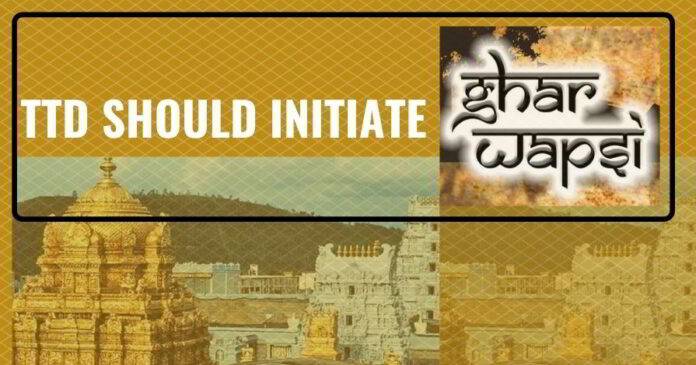 In order to protect and promote Hindu Dharma, TTD can initiate GHAR WAAPASI – welcoming back to Hindu Dharma who converted to Christianity for various dubious and questionable reasons.

TTD should be at the forefront to ensure that dharma is practised, protected, promoted and propagated

Global Hindi Heritage Foundation (GHHF) has been communicating with the TTD officials for the last 15 years on various issues. We have met almost all the Executive Officers and Chairmen and talked about the need to protect the interests of Hindus. We met all the Chief Ministers, Endowment Ministers and other officials and submitted our concerns. GHHF is concerned about the dwindling Hindu population even in Tirupati. TTD cannot ignore the rampant conversion going on around Tirupati and the rest of the State. It cannot be a silent spectator to this menace. You cannot be indifferent. The conversion menace has already entered TTD and silently spreading the venom. GHHF expressed these concerns a number of times with no success.

In order to protect and promote Hindu Dharma, TTD can initiate GHAR WAAPASI – welcoming back to Hindu Dharma who converted to Christianity for various dubious and questionable reasons. As per the guidelines of Hindu Dharma Prachara Parishad (HDPP), TTD should conduct different religious programs not only to inform them about the richness of Hindu dharma but also about the true nature of Christianity whose main objective is to convert Hindus into Christianity in the guise of doing selfless service to Hindu community. The agenda of HDPP is “to preserve, propagate and promote Hindu Dharma as the official dharmic face of TTD by organising different devotional programmes and HDPP conducted various religious programs to bring the Lord closer to his devotees and also to enhance and enrich the spiritual and devotional quotient in TTD activities.” Initiation of Ghar Waapasi is consistent with the agenda of HDPP

As you are aware that conversion of Hindus is going on for centuries, we all know how many methods, tricks and deceptive techniques Christians use to woo the gullible and desperate people into their fold. We also know how many crores of Rupees they get from foreign countries and how they use those resources. We all know how many churches are built all across India and Andhra Pradesh in particular, without permission from authorities. Even in Tirupati, they built many churches without permission either from the Collector’s office or other authorities. No politician wants to challenge the construction of these churches for their insatiable desire to please these Christians, they even close their eyes when the Christians keep demeaning Hindu Gods and bashing Hinduism. They also refuse to take any steps to stop Christians from occupying the Temple lands and lands of innocent Hindus.

As per the 2011 Census, Christians constitute only 1.4 per cent in Andhra Pradesh. Relentless conversion efforts over the last 8 years have yielded a bumper crop. On May 20, 2020, the AP government decided to provide one-time assistance of Rs 5000.00 to reward 29,841 pastors based on about 18 per cent of the Christians population. We can see that the Christian population increased from 1.4 per cent in the 2011 Census to 18 per cent by 2020

Although the Christian population is estimated to be at 18 per cent in Andhra Pradesh, the actual percentage of Christians is likely to be double that number. If we go to Krishna, Guntur, West Godavari, and East Godavari districts, you will see a row of Churches all across the streets. Converted Christians are requested by their pastors to hide their religion and not to report their converted faith. Hindu population in Andhra Pradesh is probably around 60-65 per cent. The government wants us to believe that Hindus are 80 per cent.

TTD should be at the forefront to ensure that dharma is practised, protected, promoted and propagated.

It is not just enough to make arrangements for the devotees to have darshan of Lord Venkateswara, to provide accommodation, serve annadanam, and offer Prasadam.

It is not enough to provide special darshans to VIPs and other dignitaries.

It is just not enough to arrange cultural programs and to publish hundreds of books every year.

It is not just enough to fund hospitals and educational institutions.

TTD should make sure that they address the deceptive practices conducted by other religions to convert Hindus to their faiths. It cannot close its eyes and pretend that Hinduism is not being destroyed, defamed, and defaced. It cannot fail to address the issue when dharma is under attack and when their dharmic people are being duped into believing that Hindu Gods are mere stones and Saitans. TTD cannot plead ignorance because all the news media has been reporting the deception of Christianity through allurement and special privileges. It should challenge any law that prevents Hindus to enjoy the same privileges as other religions. TTD should not be subservient, and a submissive pawn in the hands of the government.

Our aim should be to follow Dharmic Principles and uphold the eternal values cherished by Hindus for over 3-4,000 years

TTD should actively engage in bringing the ex-Hindus back to Hinduism as a part of Hindu Dharma Prachara Parishad. Prachara means promotion, betterment, and advancement. TTD Board members cannot shut their eyes, plug their ears, and tie their tongues when a large scale conversion of Hindus is being conducted through allurement and other incentive practices. TTD cannot be an island and think that nothing is happening around them. We cannot ignore the fact that Christians are going on war footing to convert as many Hindus as possible. You are all aware of it.

TTD should employ a Ghar Waapasi team, train them to be acquainted with the richness, grandeur, and treasures in Sanatana Dharma. We should also train them about the Bible and how it is different from Bhagavad Gita.

Our efforts to engage in Ghar Waapasi do not have to be deceptive, alluring, taking advantage of their predicament, using miracle boxes, engaging in miracle cures, and so on.

Our aim should be to follow Dharmic Principles and uphold the eternal values cherished by Hindus for over 3,000-4,000 years. Dharma must be practised the way it was in Mahabharata,“ No one should leave the path of dharma on any account – neither by temptation nor by fear nor by greed nor for life. Because pleasure and pain are both transitory, dharma is permanent and follows the soul in all directions.” (Ashvamedha Parva 43:14)

In our efforts to engage in Ghar Waapasi, we will follow the principles of dharma, not adharma; truthfulness, not untruth; purity, not impurity; inclusiveness, not exclusiveness; righteousness, not unrighteousness; honesty, not dishonesty; respectful, not disrespectful; tolerance, not intolerance; open-mindedness, not closed-mindedness; accommodative, not preventive; deferential, not arrogant; polite, not impolite; and peaceful, not violent.

Christianity condemns not only condemns non-Christians; they also condemn themselves to hell. Ted Turner, the founder of CNN, pleaded Christians to be more tolerant and loving

TTD should not turn their blind eye to the reality on the ground. The Christian missionaries are a threat to the very existence of Hinduism. They say Christianity is the only true religion, Jesus is the only saviour and non-Christians are condemned to eternal hell.

They adopt or digest Hindu Customs and Traditions only to Convert Hindus.

‘The church is of the opinion that if it accepts Hindu culture and traditions, the process of converting Hindus can be speeded up’. This is precisely why Christian missionaries use Hindu culture, customs, and attire. Every Hindu should be aware of the fact that the Christians mission is to convert India into a Christian nation. To accomplish that goal, they have adopted a large number of Hindu customs, traditions, and rituals. By adopting or digesting Hindu ways of life they ignore their Holy book called Bible. Many of the customs and traditions adopted by Christians have no references or sources from the Bible. Their newly adopted Hindu customs are contrary to the Christian world across the globe. What Indian Christians have adopted over the years is contrary to their own Bible only to fool the Hindus, convince them, deceive them, manipulate them, control them, and convert them.

Furthermore, if we look around the world, what the Indian Christians are doing by adopting the Hindu customs are alien to Christians all around the world. They never adopted these deceptive techniques in any part of the world. These deceptive tactics work mainly in the Dalit community because of their illiteracy, ignorance of Hindu knowledge, and discrimination by the Hindu community at large.

Christianity not only condemns non-Christians; they also condemn themselves to hell. Ted Turner, the founder of CNN, pleaded Christians to be more tolerant and loving. As he was growing up, he became disenchanted with Christianity due to its hatefulness toward others. He said that as a boy, “he had wanted to be a Christian missionary. But now, he said, he understands that missionaries are the enemies of truth and tolerance.” His religion was intolerant toward the religious freedom of other people, but he thought that they were the only ones who go to heaven. He acknowledged that “It just confused the devil out of me because I said heaven is going to be a mighty empty place with nobody else there. So, I was pretty confused and turned off by it. I said it just can’t be right.”

“Instead of all these different gods,” he said, “maybe there’s one God who manifests himself and reveals himself in different ways to different people. How about that? … Basically, the major religions which have survived today don’t have blood sacrifice and they don’t have hatred behind them. Those which have done the best are the ones that are built on love … It is time to get rid of hatred. It is time to get rid of prejudice. It’s time to have love and respect and tolerance for each other.”

Note:
1. The views expressed here are those of the author and do not necessarily represent or reflect the views of PGurus

Mother as an Embodiment of Sacrifice and Protection