On November 30 (Saturday), Sri Paripoornananda Swami, Peethadhipathi of Sri Peetham of Kakinada and Dr. Ghazal Srinivas, the Brand Ambassador for Savetemples of Global Hindu Heritage Foundation went to Tirupathi to meet with the Collector of Chittoor District, Executive Officer of Tirumala Tirupathi Devasthanams (TTD) and many local groups to discuss various issues affecting the sentiments of Hindus and sanctity of religious institutions.  They participated and discussed the relevant issues with the respective authorities.

1) They met with the Executive officer of TTD, Mr. M G Gopal to handover a letter from Global Hindu Heritage Foundation (letter attached below). Addressing the assembled journalists Swami Paripoornananda expressed his dissatisfaction with the slow process of TTD in taking up the construction of Vakula Mata Temple. He stated that the illegal mining was destroying the Vakula Mata Temple site since 2004. He said that only after the construction of Vakulamata Temple is complete, He would go to have Darshan of Lord Balaji and will say “Ayya, your mother’s Temple is constructed.” He said that he has taken vow not to have darshan of Lord Venkateswara until Vakula Mata Temple is completed. He said with the help of GHHF he is ready to take the responsibility of building the Vakulamata Temple. Mr. Gopal mentioned that a case is pending in the High court. As soon as the case is cleared, TTD will proceed with plans to construct the Temple.

Swami Paripoornananda also mentioned that the state is facing many unexpected and unwarranted problems. It is because of neglecting the Vakula Mata issue. All the problems will be resolved as soon as the Temple is constructed and the mother is provided a place for her to reside. Ghazal Srinivas, the Brand Ambassador of Savetemples of GHHF, said that NRIs are ready to take up the Vakula Mata Temples if TTD fails to pursue the matter.

2) Swami Paripoornananda and Ghazal Srinivas also met with the Collector of Chittoor District and inquired about the steps the government is undertaking to handle the issue related to the construction of Islamic University in Chandragiri near Tirupathi. As many of you are aware that the Collector issued an order to demolish 5 stories of the Islamic University building. The demolition order was issued because that the University authorities violated a number of guidelines and defied the City regulations.  Swami Paripoornananda impressed upon the Collector that he should look into the acquisition of the land by Islamic University. How did they acquire the land to build the university, who sold the property to the university, how did that person sell the land, whether the University authorities have encroached the land, and number of other issues were raised to the Collector who has agreed to monitor the issue very closely.

3) Swami Paripoornananda and Ghazal Srinivas also announced that TTD should declare the surrounding area as Sacred Place - Dharmakshetra. All people irrespective of caste creed and political affiliation should champion the cause where by 100 kilometers are should be free from other religious symbols, buildings and other activities, which are aimed at hurting the sentiments of Hindus.  Every Hindu should know that no other religious activities are undertaken or permitted surrounding the Vatican as well as Mecca.  As many of us know that in many Islamic countries such as Saudi Arabia, one cannot even carry Bhagavad Gita or even a Hindu Gods picture. It is the dharma of all Hindus to maintain the sanctity of TTD.

4) As many of you are aware that about 4-5 years ago that the Board of TTD was considering to remove Gollmantapam which was in front of the main Door of the Balaji Temple. Numerous protests and demonstrations prevented the plans to demolish the Gollmantapam. It appears that there were many rumors floating around about this issue and TTD may move it to another location. Mr. M G Gopal indicated that TTD has no plans to move it and it will remain in its original place.

5) Swami Paripoornananda Swami also requested TTD to make necessary arrangement by sending busses to the villages, where there are Temples, and bring the devotees to have Darshan of Lord Venkateswara.

Following letter was submitted to TTD.

On behalf of Global Hindu Heritage Foundation, we want to request you to update the progress onthe planning and construction of Vakula Mata Temple. As you may know that a number of organizations, saints and other individuals have been requesting TTD and State Government to construct Vakulamata Temple for a number of years.

In August 2012, Swami Paripoornananda and Dr. Ghazal Srinivas have undertaken procession to highlight the importance of restoring and renovating Vakulamata Temple and underscore the total negligence on the part of TTD and the government.

On September 27, 2012 speaking to media persons you announced that TTD will reconstruct this temple irrespective of controversy over the genuineness of Vakulamata Temple. TTD has committed to maintain many ancient temples and to perform daily rituals with its own funds and hence it has allotted ten crore rupees fund especially for this purpose, he added.Unfortunately, no concrete action has been revealed to build the Temple even after one year of the approval by TTD. Hence, we request TTD to take immediate steps to construct Vakulamata Temple forthwith without dragging the feet.

If TTD is unable to build the Vakula Mata Temple, Global Hindu Heritage Foundation (GHHF) is willing to take the full responsibility of building the Vakulamata Temple and also be willing to maintain the Temple as per the traditions.  Hindus have been anxiously waiting to see that the Temple is built and give enough respect for the mother of Lord Balaji. We request TTD to grant permission to GHHF to plan and construct the Vakulamata Temple.   Hope to hear at your earliest. 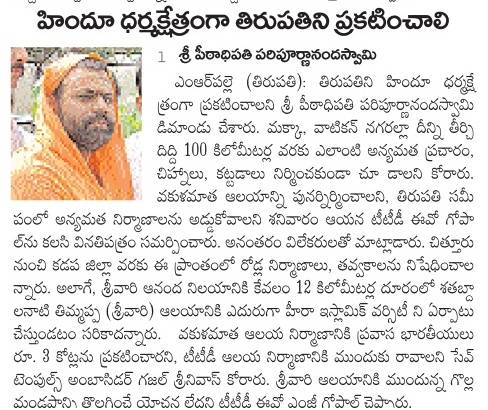 As many of you know that SaveTemple Office was opened in June 2012 in Hyderabad.  Office is located in Khairatabad. Four full time employees are working on the update of our website, Aalayavani Web Radio, Aalyavani magazine, conducting various activities to preserve and protect Hindu Temples and Culture. Our budget is approximately 2 lakh rupees per month.  We request your generous donation to conduct activities to promote unity among Hindus and restore the glory of Hinduism. Please DONATE. Your donations are appreciated to continue the work.

You can go to http://globalhinduheritagefoundation.us6.list-manage.com/track/click?u=0cefbe8fbf60e006f30df206a&id=7fa9beef11&e=850bc6ced2 and pay by PAYPAL.

[GHHF] Dr. Subramanian Swamy On the Coming Crisis of Hinduism