Open letter to Jagan, administer state for all Andhra people

Open letter to Jagan, administer state for all Andhra people 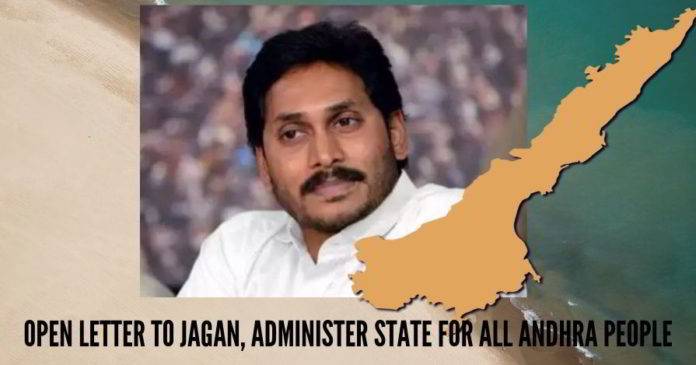 Congratulations on your being elected Chief Minister of Andhra. NRI from Andhra as well as from all over India residing across the world wish you well. It is our sincere hope that you will administer the state for all people of Andhra irrespective of whether they supported you or not in the elections. Our beloved Prime Minister Narendra Modi is leading the way by working for the welfare of all Indians, working for aspirational India devoid of religion, region and Caste biases and propel India to regain its great economic, cultural and spiritual heritage that leads the world for many centuries. You too have an opportunity today to work the same way for all people of Andhra and play a role in moving India forward.

We would like to bring to your attention some of the concerns Telugu people across the world have based on ourexperiences of your father YSR and also past experience of your counters with Hinduism. Your father has done a tremendous job in helping the marginalized sections of people and hope you continue his legacy in helping the most disadvantaged people in the state. However, there are major concerns with your father working closely with Christian missionaries that converted large swathes of combined Andhra, particularly coastal Andhra where more than 20% were converted in a span of 5 to 6 years.

The images of large conversion melas engineered by foreign Christian missionaries and then by your sister and brother in law with the active help of your father administration using state public lands and its infrastructure brings enormous concern among Telugu people across the world, particularly Hindus. 40% of Hindu temple lands were disposed at giving away prices to friendly corrupt developers and churches were built right on temple lands. Recently there is a video posted on WhatsApp where your sister openly saying that you will be un-caged and will bring the message of Jesus. In your manifesto Press Conference, you have mentioned that you will provide houses for every Pastor in the state and marry off the Christian brides using State money. In many ways, there are issues with this from legality as well as ethics. From a legal perspective, how can state funds from contributions of taxpayers of all Indians across all religions be used for one religion and worse, when the state is severely straightjacket for funds. Then there is another concern that only Hindu temples are under Government control, particularly Tirumala temple and to this day since 1993 there has been no audit of how the thousands of crores of funds contributed by Hindus are used. In a way, this means the funds provided by Hindu devotees will be used to build homes of Pastors while Hindu priests across the state under Government control arenot even getting minimum sustenance for their survival. Christian pastors who are already known to be aggressively converting will use this economic providence to use their time to convert more people into Christianity.

Some of the slides from detailed presentations of assault on Hinduism under your father that are very widely popular on the internet are given below. (Here are links for ‘Death of Hinduism‘ and ‘Save Temples‘ ). 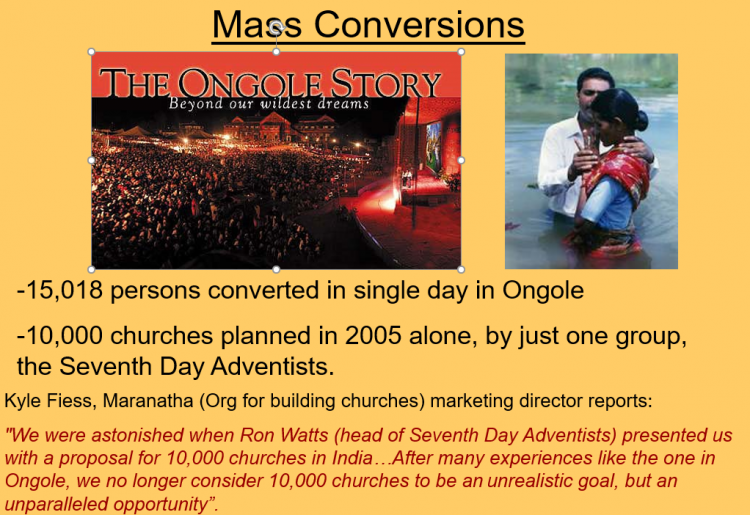 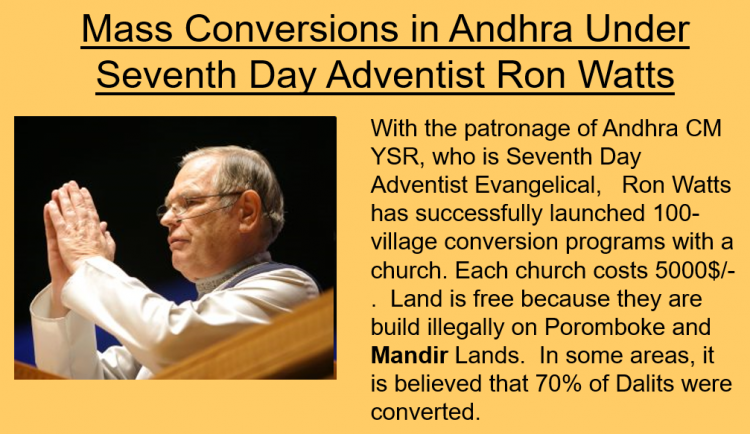 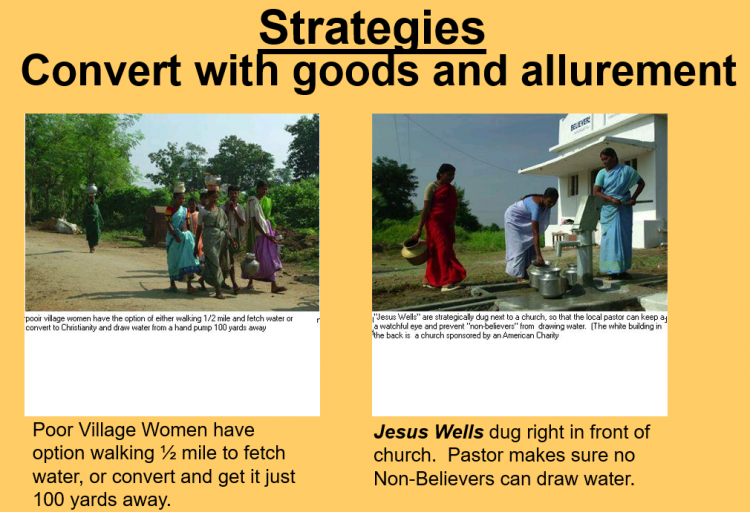 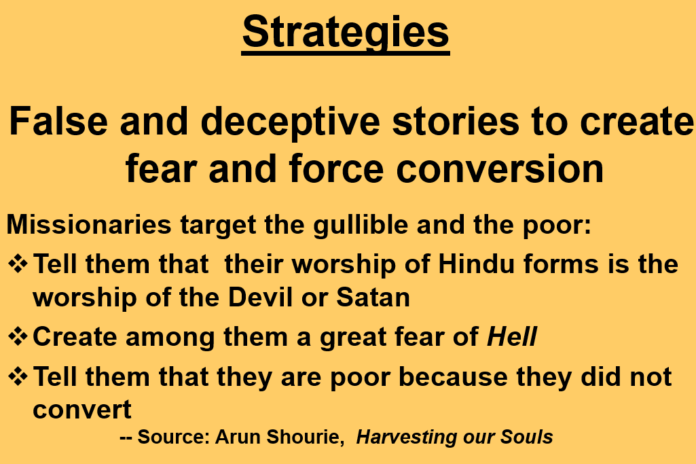 During your father’s regime, there was even an attempt to take 5 out of 7 Tirumala hills for tourism, which is really a front of Christian missionary Organizations the world over first target the native religions and take over them and convert them into museums. Your father, under Christian missionary instructions, has appointed Christians intoTirumalatemple and even the administration of Tirumala funded education institutions was filled by fundamentalist Christians who are openly encouraging conversions into Christianity.

Such was a deception that your father engaged in while celebrating Rama Navami with your mother in traditional Hindu costumes in a Hindu temple before cameras, your father has removed Rama Navami from State Government approved holidays and in fact increased holidays for Christians who were an only small fraction of state. In 2007, few of the NRI had organized a major protest in Chicago during your father visit, expressing these concerns and awaken the Hindus across the world. In 2012, it is well known in the news that you entered Tirumala temple without making the required declaration from people of other faiths. You have now appointed Stephen Ravindra, as AP new intelligence chief, who also worked as Chief Security Officer under your father’s administration. Stephen is known to be hard core Christian and there are major concerns that he will allow the Christian conversion activity in the state and intimidate any exposure of that activity by Hindu activists, which happened under your father administration. We hope Central Government will study his credentials in stopping illegal conversion before giving nod to his appointment. There is also concern about the local and foreign Christian missionary organizations making beeline to your administration with detailed plans (covertly and overtly) for small and large scale conversions as is seen from the putting in place of the old infrastructure for protection of their activities.

You have now appointed Stephen Ravindra, as AP new intelligence chief, who also worked as Chief Security Officer under your fathers administration. Stephen is known to be hard core Christian and there are major concerns he will facilitate illegal Christian conversion activity in the state and intimidate any exposure by Hindu activists, which happened under your father administration. We hope Central Government will study his credentials before giving nod to his appointment. 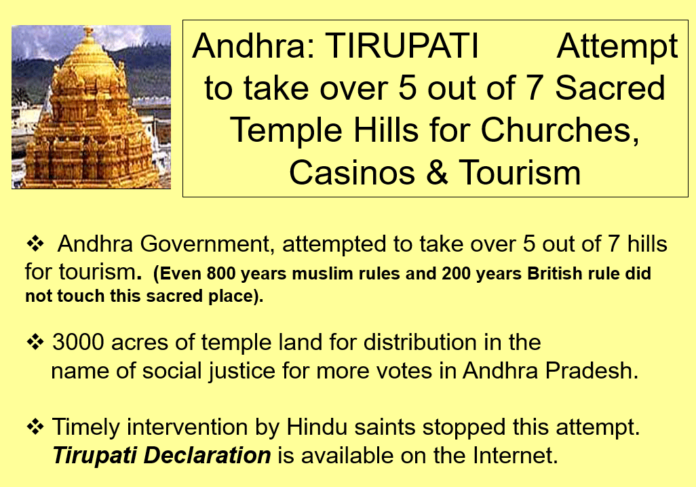 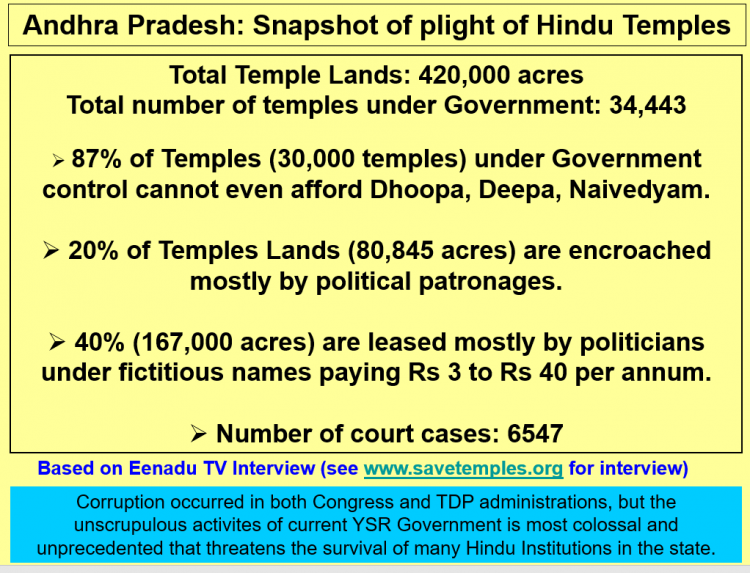 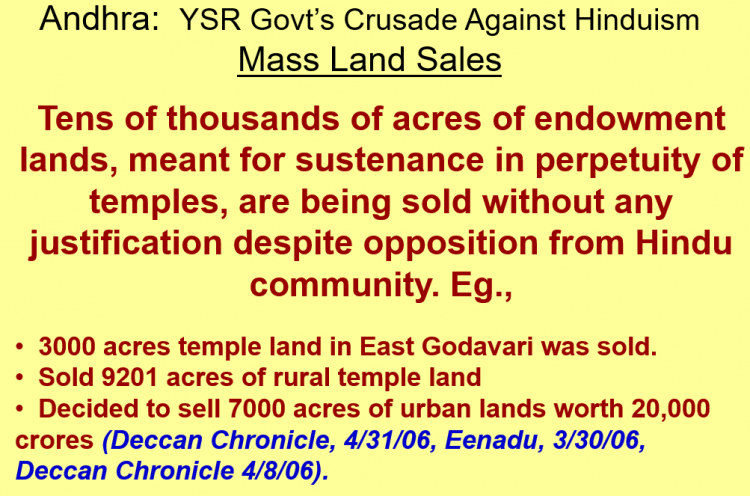 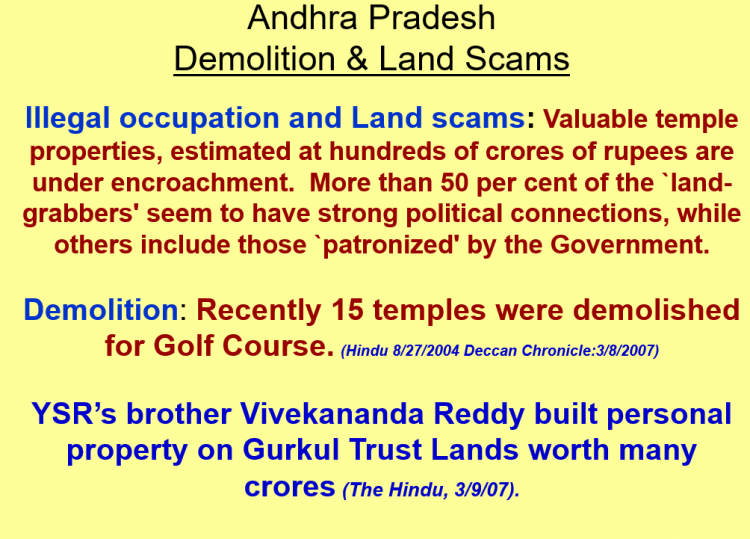 This causes many concerns among Hindus across the world. During your campaign, you took the blessings of Hindu spiritual leaders. But it remains largely to be seen how you will administer. Your manifesto offerings to only Christiansis unfair and will trigger court cases both in the State and Supreme Courts.

You are given a golden opportunity to administer the state and you have to decide whether you will administer fairly for all people of Andhra or only sections of Andhra. As Narendra Modi and BJP is saying, the current mandate across India is from aspirational India that wants to rise above Caste politics. During your father rule, every other person appointed to the state is a Reddy. But your voters are not just Reddy community, people from all communities have voted and it is wiser to select the best from the state no matter who they are.

I sense that even if you try to adhere to be a Chief Minister for all sections of people in the beginning, as days go by, you will be prodded by Christian pastors and establishment to get a deal for them in form of state support for conversionand financial benefits, then there will be Reddy community saying that they helped finance your elections and will ask for return in favours to siphon off from the State projects, there will even be NR Reddy organizations looking not just for Photo opportunity but also opportunities to take personal advantage, ahead of others. This is not to say there are wonderful people from all communities including Reddy community who are very patriotic and doing yeoman service for the state and the country and will use your office to serve the state and the country. But you need to see beyond casteand look for contributions from all people of the state to help bring progress to the state. For too long, rich and powerful farming communities Chowdhary and Reddy have ridden roughshod and took undue advantage of the state resources. This is feudalism and this is what Narendra Modi-ji is attempting to go past and build a better ndia for every ndian. It is a shame in this elections we had three parties representing three different farming communities, rather than parties vying for who will do better for all the people of the state.

Then there is a goonda Raj. Just a few days ago social media was circulating videos of removing garland from NTRstatue and breaking of car windows of some people, perhaps because they belong to TDP. With instant information insocial media, every single incident will be known across the world. That is not to suggest that things be done behind closed doors because truth has a way of coming out. When the rest of India is marching ahead, do you want to create a goonda Raj or a state where laws are followed un-equally for all citizens? In the United States, a cop will be fearless to give a traffic violation ticket to a Supreme Court judge but in India, the rich and powerful have different laws.

Dear Jagan, the combined Andhra has a rich heritage of thousands of years. It boasts 350 years of Krishnadevaraya rule which warded off Islamic onslaught on the country for centuries. Freedom fighters such as Alluri Seetharamarajuare the pride of this state who stood against the oppressive British. Tanguturi Prakasam and Potturi Sreeramulu, and many other great Telugu people representing combined Andhra Pradesh fought selflesslyfor all Telugu people. World over people are following Yoga and meditation and craving for what Hinduism has to offer. In fact, there are many who now profess that Jesus visited India and it is here in India under the guidance of spiritual teachers of our common ancient heritage that he was enlightened and took the message to the middle east. In fact, the Bible talks about ‘Wise men of the East‘ and a channel called Sun Dance channel many years ago in the USA had a full program on this topic on Jesus visit to India. Bible has nothing to say about his early 14 years. Christian missionaries only interest is to bring more converts and rule from Europe and they have little interest in India or its welfare. Mahatma Gandhi, our father of nation abhorred Christian missionaries activities in India and there are enormous literature and writing of his opposing in the strongest terms and he called, “Stop Christian missionaries activity in India, it is the deadliest poison that ever sapped the fountain of truth”. In a recent rally in front of Lincoln Memorial in Washington DC, many NRIs in the USA brought the message of Mahatma Gandhi opposing the fundamentalist, break India forces of Christian missionary organizations in the West. You have an opportunity to bring Christians and Hindus together by declaring given Jesus background he is one more avatar in Hindu parlance.

You are at the crossroads of the destiny of Andhra. You have a choice to build an Andhra for all people of the state, anAndhra Rajyam, or you have a choice of creating multiple Rajyams, a Missionary Rajyam, a Reddy Rajyam and a Goonda Rajyam and bring down the state.

Copy to The Honorable PM, Amit Shah-ji and the entire BJP leadership.

Religion and the State

"Cows are Sacred; Scriptures Extol them; Hindus Must Protect Them" Part-1

GHHF Ghar Waapasi efforts in Gadwal District in Telangana State. Contact us on how you can help Ghar Waapasi