“I stood in awe in front of those powerful sculptures whose reproductions I had known and loved for many years: the triple image of Shiva Mahesvara, the Great Lord, radiating serene tranquility and peace; Shiva Ardhanari, the stunning unification of male and female forms in the rhythmic, swaying movement of the deity’s androgynous body and in the serene detachment of his/her face; and Shiva Nataraja the celebrated four-armed Cosmic Dancer whose superbly balanced gestures express the dynamic unity of all life.” “I had a more powerful experience of Shiva sculpture in the Ellora caves. The beauty and power of these sacred caves are beyond words. “ These are the words of Fritjof Capra when he visited the Ajanta and Ellora caves.  Those images surpassed the imagination of human mind, although they are the products of human mind, rather human genius mind. They were stunning, amazing and exquisite. It is our responsibility to make part of our personality that would reflect our culture, not deflect it’s richness. Let the learn become enriched with brilliance and intelligence. The more we know about our Temple, the more we appreciate, the more we cherish, and the more we will protect.

On June 21, Dr. Ghazal Srinivas held a news conference with organizing committee of International Short Film Festival, and Senior Journalist Sri Pasupuleti Rama Rao released a brochure, specially prepared for this occasion. He observed that in many foreign countries, especially in USA, any historical mementos like even a brick is preserved and display it in National Museums to enrich their traditions and culture.  In India, although we are endowed with richness of millennia of culture, gifted with unbroken cultural heritage, remarkable lineage of the genius of great rishis, and bestowed with unmatched treasures of scriptures, Hindus are not taking proper steps to preserve and protect even Temples found in Ellora, Ajanta and other Temples all across the globes. These Temples represent our age-old culture and traditions, practices of worship, respect for our Deities, and wonders of architectural skills. It is the duty and responsibility of all Hindus to preserve and protect these Temples from being dilapidated. Global Hindu Heritage Foundation (GHHF) was started with a mission to preserve, promote and protect Hindu Temples and Hindu Dharma that have been neglected by our own people. It is committed to free the Temples from the Government control by making Hindus aware of the problems our culture is facing due to our own benign negligence and selfish indifference. Dr. Srinivas mentioned that develop interest and passion in preserving the Temples after he met Dr. Velagapudi Prakasa Rao, one of the founding members of GHHF.

In a press meet, Dr. Srinivas mentioned that we are committed to protect the Hindu Temples, cows, Temples lands, Temple assets, Temple jewelry, and integrity of Temple traditions. By organizing the International Short Film Festival on Save Temples, we are committed to spread the awareness among all people the richness of our traditions, fullness of our culture, and wonders of our Temples so that all Hindus will take the pride in preserving their heritage. We are requesting the interested people all over the world to submit the short films on any aspect that revels any aspect of the Temples and / or reveals the mysteries surrounding these Temples that have centuries of unmatched history.

Further Details can be had by visiting the website -

Awards to the Best Films

Members who participated in the news conference and the release of the brochure on the International Short Film Festival include: 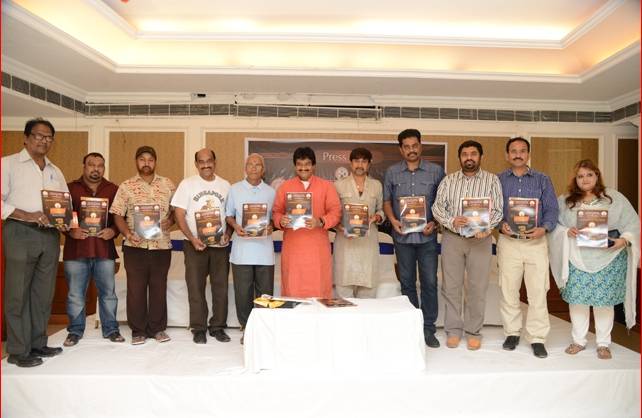 The news Conference was covered by newspapers such Andhra Bhumi, Andhra Jyothi, Metro India, Sakshi, Praja Sakthi, Namaste Telangana, and Surya. The coverage material is attached for your information. 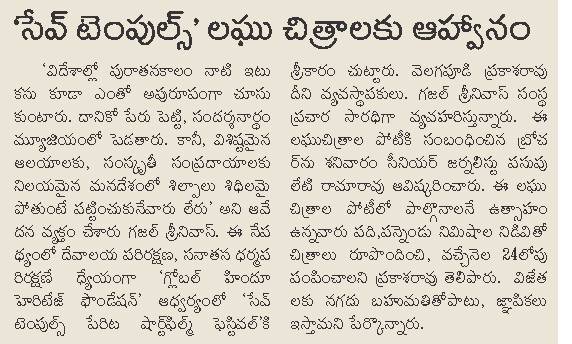 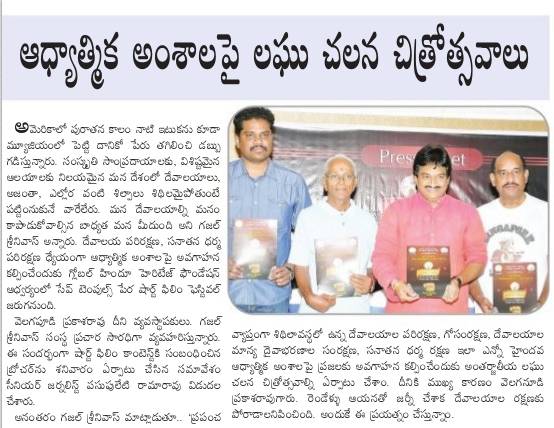 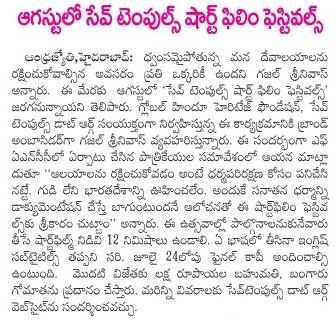 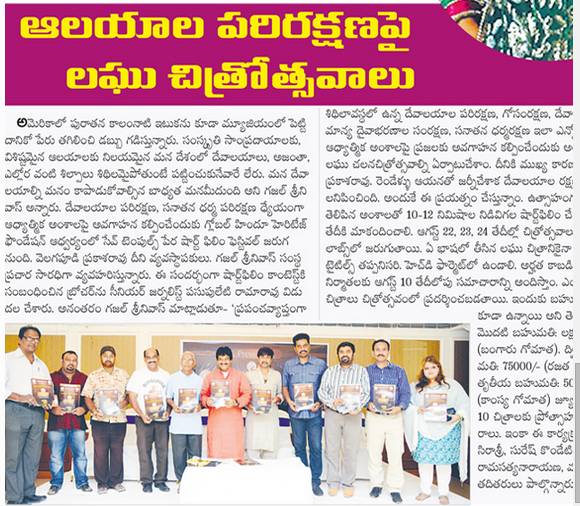 Your donations for the International Short Film will be appreciated. Prizes can be given either on your name or your company name.As many of you know that SaveTemple Office was opened in June 2012 in Hyderabad.  Office is located in Khairatabad. Four full time employees are working on the update of our website, Aalayavani Web Radio, Aalyavani magazine, onducting various activities to preserve and protect Hindu Temples and Culture. Our budget is approximately 2 lakh rupees per month.  We request your generous donation to conduct activities to promote unity among Hindus and restore the glory of Hinduism. Please DONATE. Your donations are appreciated to continue the work.

NOTE: GHHF is exempt from federal income tax under section 501 (c) 3 of the Internal Revenue code.    Our tax ID # 41-2258630
Please send your tax-deductible donations to:
Global Hindu Heritage Foundation,
14726 Harmony Lane, Frisco, Texas 75035
You can go to https://www.savetemples.org and pay by PAYPAL

All is not well in Tirumala!