Hindu Activists voices are being muzzled with police power

There are thousands of Hindu temples across India where Christians are openly trying to preach and convert Hindus by saying Hindus are devil worshippers.

Andhra administration seems to be working hand in glove with Christian missionaries Visakhapatnam's police commissioner Rajiv Kumar Meena issued a memorandum to the city police to protect minority Christians and their churches from Hindu aggression. As per Vizag's city police website, the commissioner took charge on 27th June 2019 and this memorandum was issued on 4th July 2019. Commissioner did not waste any time issuing the orders to protect the Christians. The person who requested protection seems to have close links with the Andhra Christian chief minister Y.S. Jaganmohan Reddy. 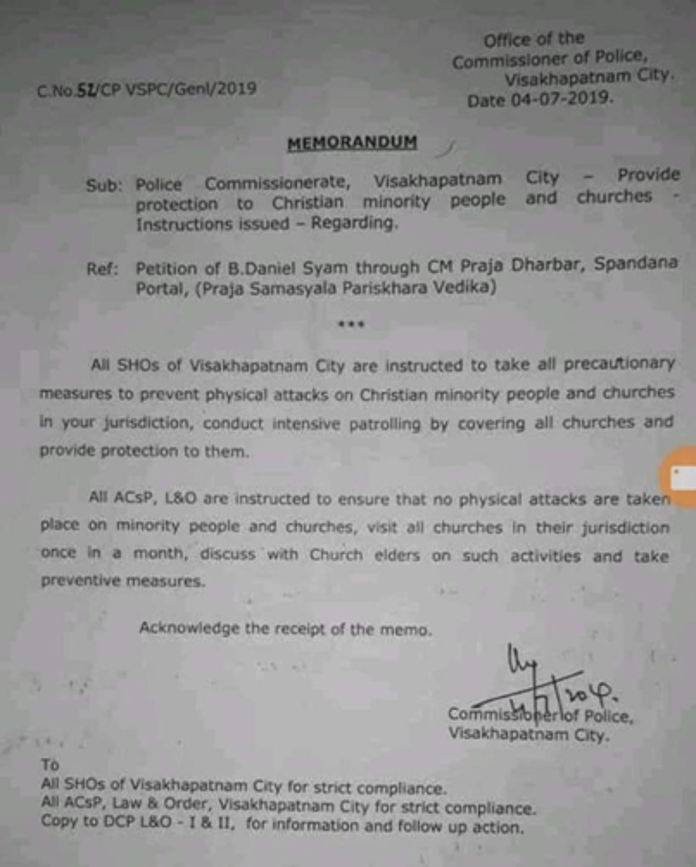 All over Andhra, Hindus are under attack. Except in rare circumstances mostly aggressors and provokers are from so-called "Minority" community. When Hindus retaliate in desperation[1], Christians play the victim card and use the mighty power of the administration to muzzle the voice of Hindus. One such example is Shivaji, a Hindu activist from Shiva Shakti organisation was arrested in Kurnool, Andhra Pradesh. He was arrested for sending WhatsApp messages which are alerting Hindus from the lies peddled by other religions. After the arrest, Andhra police have declined to give answers to the public and booked him on charges related to WhatsApp messages. Police are also blocking and not answering phone calls. Is the Andhra administration following traditional Christian methods to oppress or discourage Hindu voices? Shiva Shakti Shivaji's arrest in Kurnool is an indication of the attitude of the police. As per the above memorandum, this is likely to repeat in Visakhapatnam and other places in Andhra too.

"Andhra government came up with a scheme of appointing several hundred village volunteers. It is being alleged that many of these appointees are Christians and also YSR party members." 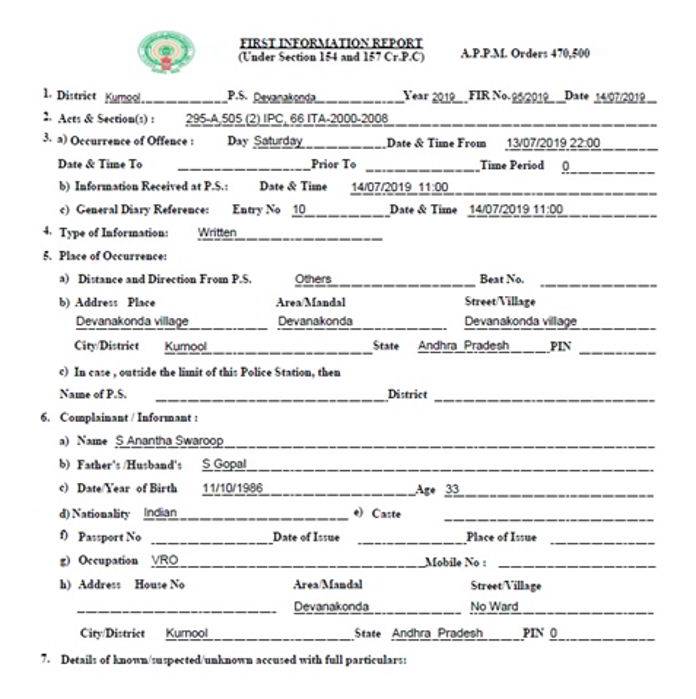 In Andhra, during Y.S. Raja Sekhar Reddy's rule, several evangelists tried to proselytize in some of the famous Hindu temples such as Tirumala. After protests from the Hindu society, the administration issued orders restricting Evangelical activities near-certain temples. We can see the copy of that G.O below. 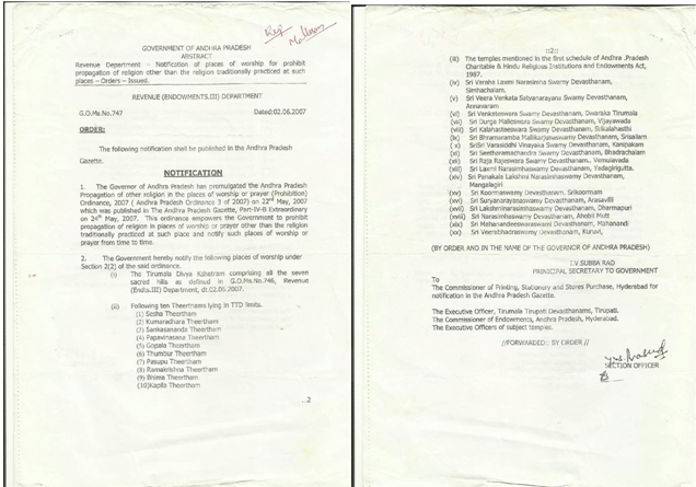 There are many grey areas in this G.O; there is no mention of how far a distance from the Hindu temples such evangelical activities are restricted and why only a few temples? Is this G.O indirectly saying that the government is allowing the Christians to preach near the Hindu temples which are not mentioned in this list? Why not a blanket ban? Did the government punish the guilty Christians ever? May be government or the police don't have the evidence. Social media is full of such evidences. In this video we can clearly see how these missionaries are trying to proselytize near a temple near Visakhapatnam.

Andhra was known to divert Hindu endowment funds to the government's common good funds. Endowment department is making thousands of crores or rupees every year[2]. [3] Despite having huge sums of money, many Hindu temples are in a very bad state. Many Archakas are struggling to make a living.[4] On the other hand, the Christian preachers and Islamic mullahs are getting huge sums of money from abroad (5] via FCRA and FDI, and their communities are also paying them well (Dasama Bhagam, i.e. 1/10 th of their earnings are donated to church or Mosque). Super secular Abrahamised Government is sucking all Hindu temple money and have not dared to touch Islamic and Christian funds.

As per the news on Telugu MSM, Andhra govt announced salaries to imams (Rs-10,000), pastors (Rs 5,000). It makes sense to pay salaries to Archakas because the government is making huge sums of money from temples. One would wonder on what basis the Christian ruler of Andhra gives state sponsored salaries to pastors and mullahs? There are many farmers committing suicide, the government has no love for these hard-working farmers!! Where is the money coming from to pay these salaries? Is the govt using Hindu temple money for their schemes? Is this for electoral gains? Or is Andhra chief minister openly supporting the aggressive conversion racket to convert all Hindus? It is time all Hindus must demand separation of temples from the state's clutches.

Andhra government came up with a scheme of appointing several hundred village volunteers. [6] It is being alleged that many of these appointees are Christians and also YSR party members. Their recruitment is in the final stages now. God only knows the real reason why these are appointed, maybe it is for converting Hindus at village level? Christian missionaries are notorious in using the administrative power to convert the indigenous populations across the world. History filled with many instances and evidences to prove the destruction of indigenous cultures and religions. Christian missionaries use the money power or the administrative power for conversion. One such best living example is persecution of Canadian indigenous population. [7] By doing such heinous acts the Church grew to become the world's strongest political institution under the garb of spirituality.

"The orders issued by the Andhra police is an indication of the Chief Minister'sChristians and Muslim appeasement mentality.”

In British Raj, when East India company put restrictions on missionary work in India, missionaries used "Sati" propaganda to enter into India on the pretext to civilize barbaric Hindus.[8] The same missionaries turned a blind eye to the persecution of their women on the name of the witch hunt. Approximately 9 million women in Europe were murdered, with the support of the church. [9]

From the past couple of hundred years, Christianity is spreading in India like water under the carpet. Officially India's Christian population stays between 2-3%, unofficially it is approximately 20-30% of India's population. In many states Hindus are minorities.

Historically Christians and Islamists are abusing Hindu goodwill. There are many evidences to prove their aggression. Above video is one best example of how Christians are violating Hindu hospitality. Doesn't the constitution put reasonable restrictions on all fundamental rights? There are thousands of Hindu temples across India where Christians are openly trying to preach and convert Hindus by saying Hindus are devil worshippers.

As per the constitution, every religion has the right to propagate, but there are restrictions to all fundamental rights. In the process of conversions Christians claim, "by doing idolatry a Hindu will go to hell and burn" and, they equate Hindu gods to demons. This is clear blasphemy. This blasphemy is happening on a large scale in Andhra and in India, but the authorities turn a blind eye. When Hindus confront these preachers with questions, then Christians use the power of administration to silence those who confronted the proselytization.

Time is running out fast for Hindus. If this trend continues, similar to North-Eastern states there will not be any Hindu left in Andhra in coming years. Hindus plight in Kerala and Tamil Nadu is horrible. Christianity is in control of these two states. We have all witnessed many attacks on Hinduism and Hindus in both these states. A good example is Sabarimala and how the communist government of Kerala was played by the church to destroy the holiness of Sabarimala.

The orders issued by the Andhra police is an indication of the Chief Minister's Christians and Muslim appeasement mentality. He seemed to have forgotten that all Hindus voted him to power in good faith. The administration's actions are very disappointing and unethical. They are trying to protect the aggressors and punishing the innocent who are struggling for existence from the oppressions. Hindus of Andhra must question this biased attitude of Andhra Government. If this does not change, by the end of the tenure of this government, about 50% of Andhra will slip into the spell of Christianity.

1. The views expressed here are those of the author and do not necessarily represent or reflect the views of PGurus.

Seminar on Repeal of Endowment Act in Vishakapatnam on Oct 10 was a Great Success. Walkathon to Protect Cow well Attended

[GHHF] Kashayam is being Distributed in TWO locations in Visakhapatnam to develop immunity.

[GHHF & SID] Hari K Prasad proved the Tamperability of EVMs; a Jailed hero to receive Pioneer Award in USA; His US schedule; Attend his lectures