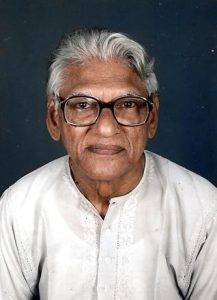 Renowned Music Composer and Lyricist Palagummi Viswanadham passed away in Hyderabad on Thursday 25-10-2012 evening. He was 93 and was suffering from ill health.

Palagummi Viswanadham composed music for about 15,000 songs of which he penned nearly 100 songs.

Palagummi Viswanadham was born at Tirupatipuram in East Godavari Dist., A.P in 1919, the fourth of five children, the eldest was P Padmaraju, the well-known writer.

Gloabl Hindu Heritage Foundation & Savetemples organizations expressed grief over the demise of Visvanatham and condolences and sympathies to the bereaved family.