(This is part of the lecture on Lord Ganesha bout the Mythology and Symbolism to Austin College Students at Karya Siddhi Hanuman Temple, Frisco, Texas USA)

“Those reformers who preach against image-worship, or what they denounce as idolatry — to them I say "Brothers, if you are fit to worship God-without-form discarding all external help, do so, but why do you condemn others who cannot do the same?” Swami Vivekananda 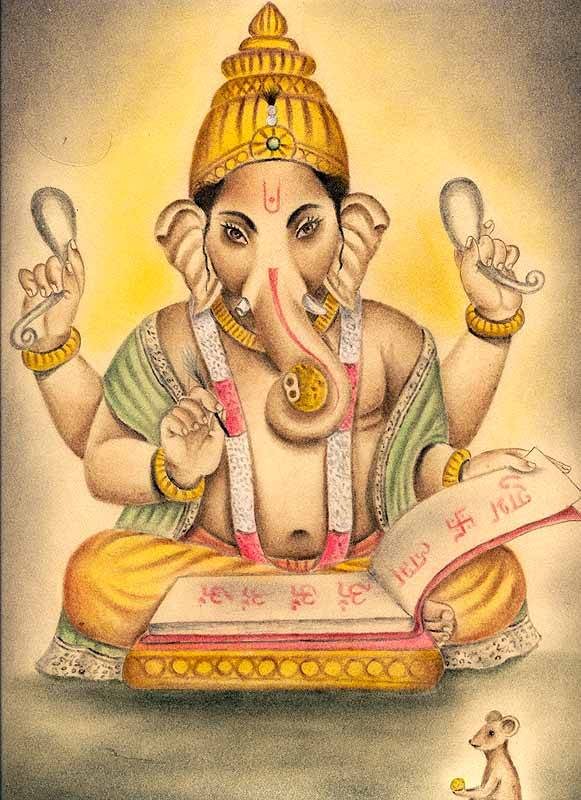 No society will function without the aid of signs and symbols.  A symbol is anything/object that stands for something representing an abstract and philosophical idea. Om is a major symbol that represents Hinduism. Cross represents Christianity. Crescent moon is a symbol of Islam. Similarly, Lotus, Bindu, Swastika, Bindu, Images of Gods and Goddesses, saffron flag, Kalash and others amply represent Hinduism. Images of Gods and Goddesses are respected and worshipped unlike Christians and Muslims.

Christianity and Islam who do not worship their images of God. For Christians, Exodus 20:4-5 guided them not to worship any Images of God. “You shall not make for yourself an image in the form of anything in heaven above or on the earth beneath or in the waters below. 5 You shall not bow down to them or worship them; for I, the Lord your God, am a jealous God, punishing the children for the sin of the parents to the third and fourth generation of those who hate me,”

Muslims are against Idol worship. They say that there should not be any one in between Allah and his disciple. They cannot even bring any idols in to the houses. They even ask their followers to kill the worshippers of idols: “Then, when the sacred months have passed, slay the idolaters wherever ye find them, and take them (captive), and besiege them, and prepare for them each ambush. But if they repent and establish worship and pay the poor-due, then leave their way free. Lo! Allah is Forgiving, Merciful.” (Surah al-Tawbah 9:5)

Hindus believe that an image, icon, statue or idol is considered a murti or Pratima. The murti/image worship does not mean worshipping the image.  It is the power in image that is worshipped.  God is manifested in the image/murti. It is through Prana Pratishta an image is infused with energy/power enabling it to assume the status of God manifestation. In fact, Hindus believe that everything is manifestation of God and thus worthy of worship.  Vastusutra Upanishad gives a detailed account of the meaning of Murthi worship and the logic behind the worship. “From the contemplation of 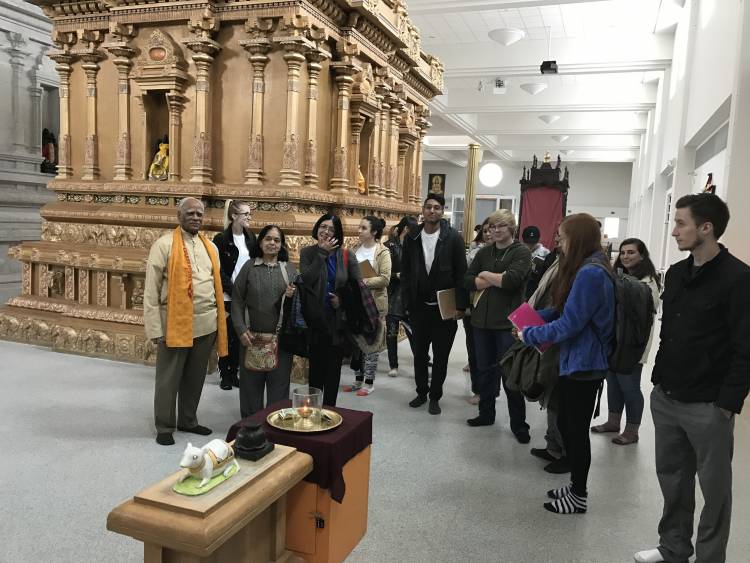 images grows delight, from delight faith, from faith steadfast devotion, through such devotion arises that higher understanding (parāvidyā) that is the royal road to moksha. Without the guidance of images, the mind of the devotee may go ashtray and form wrong imaginations. Images dispel false imaginations. (... ) It is in the mind of Rishis (sages), who see and have the power of discerning the essence of all created things of manifested forms. They see their different characters, the divine and the demoniac, the creative and the destructive forces, in their eternal interplay. It is this vision of Rishis, of gigantic drama of cosmic powers in eternal conflict, which the Sthapakas (Shilpis, murti and temple artists) drew the subject-matter for their work.”

All religions declare that God is omnipresent, omnipotent and omniscient. If we accept the fact that God is all pervasive, all powerful and all knowing, then why cannot he be there either in image, symbol, stone, idol, or a statue. Hindus believe that he can take any shape and form he wants to take. If we say that God cannot take any shape, we as human beings with all our faults, frailties, and ignorance confining the all-powerful God into our narrowminded confines and putting him in a self-created prison.

The lecture dealt with five major Gods and Goddess that are installed in five different shrines – Lord Ganesh. Lord Subrahmanya Swami, Lord Shiva, Lord Hanuman and Goddess Durga.  Mythological stories about the birth of these five deities and symbols of all the weapons, animals, hand postures, personalities and attributes were discussed at length. 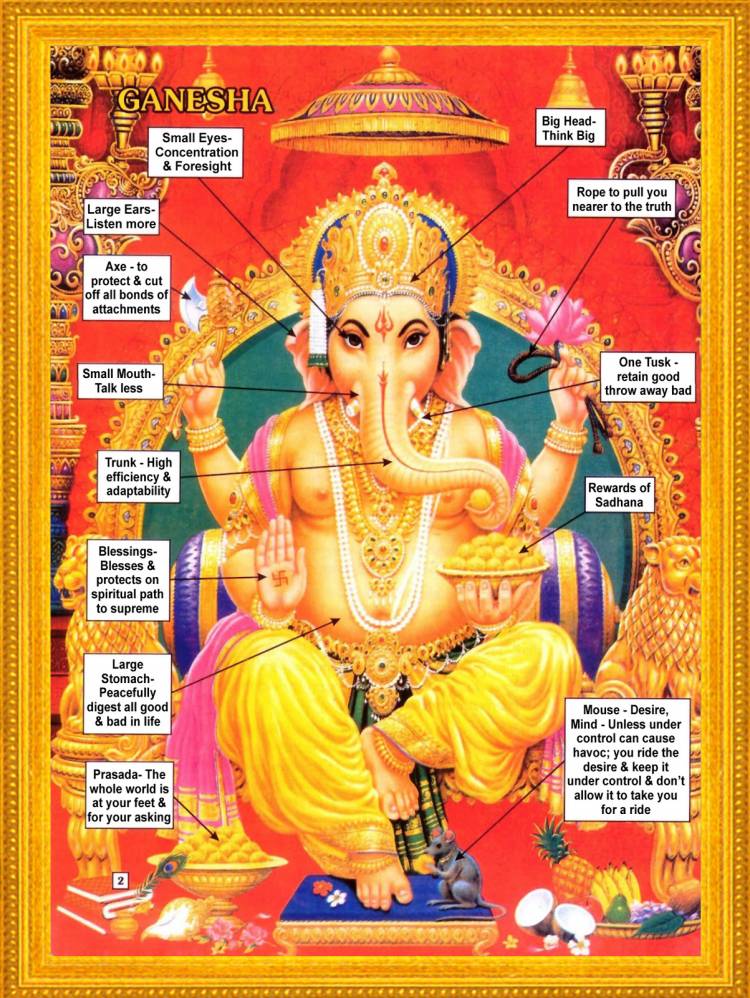 Lord Ganesh was the son of Lord Shiva and Parvati. As per the legend, Lord Shiva went to war to protect the other Gods. Parvati wanted somebody to guard the house when she was taking a bath.  She created Ganesh by using the turmeric that was rubber off from her body and infused life in it. She instructed her son not to allow any body to enter the house. When Shiva returned from the wat, Ganesh refused him to enter the house. Enraged, Shiva slashed his head. Parvati was shocked to see what happened.  To please Parvati, Shiva agreed to bring him alive by putting any living creatures sleeping with his head in the north direction. Soldiers went and brought elephant head and by which he recreated Ganesh. As Parvati was not so happy with the creation, Shiva gave a boon that Ganesh will be worshipped first before any undertaking.

Thus, he is propitiated first before conducting any puja, embarking on any tour, starting a new business, marriage ceremonies, temple worships or going to a school. He is considered as the remover of obstacles. He is very knowledgeable. Mahabharata was written by Lord Ganesh as Sage Vyasa dictated the story. His Abhaya mudra blesses his devotees with intellect, and protection.

Many symbols are associated with Lord Ganesha with different meanings. Trunk has a special and significant meaning. If the trunk turns left, it signifies the bestowal of wealth, success and pleasure.  If the trunk turns right, it blesses on with moksha related benefits – to mean that all the pleasures are temporary. Trunk is highly flexible, adaptable and supple. Learn to be efficient.  The curvature also teaches us to be adaptable to reach the chosen goal.

Tusk. The broken tusk was supposed to have used to write Mahabharata indicating sacrifice and strength.  It indicates the imperfections of the ever-changing world.

Small Eyes refers to power of Concentrate. Elephant eyes are small and they see the small things since they look big for the eyes. It signifies the need to look at the big picture.

Small mouth indicates that one should talk less. Controlling the tongue is essential to self-development and decreases the misunderstanding.

Large ears imply that we listen more and attentively, and talk less. We can understand and digest more information as we keep paying attention to those who speak.  It also means absorb the good and wise counsel and disregard the unnecessary talk. It indicated that Lord Ganesh listen to your deserving wishes and prayers. The ears look like large winnowing trays implying that he leaves out all the husk and take only the grains.

Big Head represents mental capacity to grasp the circumstances and the wishes of the devotees. It also emphasizes the need to think big.

Large stomach implies digestive capacity of both good and bad. Accepts both without any discrimination with equanimity.

Axe implies that one should cut off all worldly attachments thus enabling the devotees free themselves from the sorrows and evil tendencies.

Modak represents the sweetness one should aspire for self-realization.  The lesson to learn from it is that one will be rewarded with sweet results for tireless efforts.

Mouse symbolizes its ability to creep through small holes and find its ways to go to the target. He can slip though unobserved wandering all around the area. Similarly, mind should penetrate to aspire for liberation breaking all the hurdles. We should shed the ego and become small by riding in a rightful path.

Four arms represent the four directions, four Vedas, and four castes. It also represents four inner attributes of the subtle body, that is: mind (Manas), intellect (Buddhi), ego (Ahamkara), and conditioned conscience (Chitta). Lord Ganesha represents the pure consciousness - the atman - which enables these four attributes to function in all of us.

Ganapathi has several name – Ganesha (lord of categories0, Vigneswara (remover of obstacles), Vinayaka (great leader), Gajanana (elephant faced), Lambodara (one with large belly), Ekadanta (having one tooth), Gajakarna (One with elephant ears), Vakratunda (one with a curved trunk), Siddhivinayaka (bestower of success), etc.

Second Part of this article on Lord Subramanya, Lord Hanuman and Goddess Durga will follow soon.

To read previous article on Uniqueness of Hinduism, click: 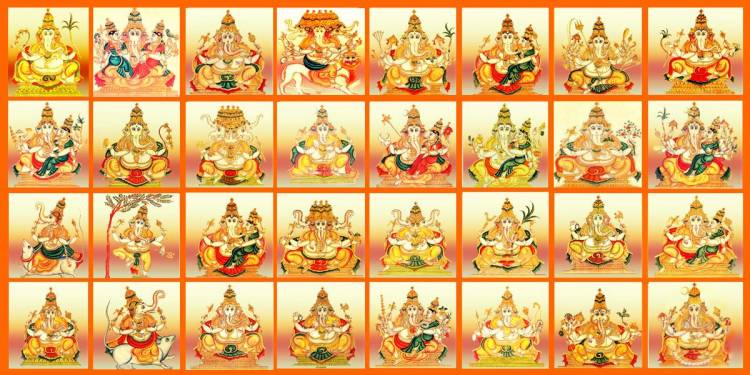 Why Cow is Sacred? Scientific Evidence Reveals the Benefits of Cow Products

AP State will take total control of all mutts

White Paper on Plight of Hindu Temples in India