(NOTE: Important and relevant articles for the preservation of the integrity of Bharat from different sources will be send under the caption GHHF Digest. Sources will be identified to give them proper credit as we reproduce the article) 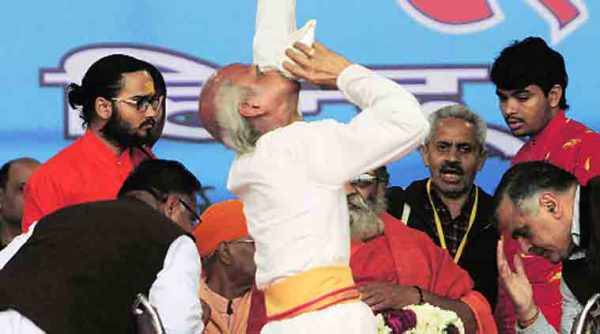 BJP leader Subramanian Swamy said that a Hindu majority is a requisite for maintaining “democracy” and “secularism”. He said that the BJP-led Modi government must take up the issue of temple-mosque disputes saying, “who says a mosque can’t be demolished”.

Swamy was speaking at the Virat Hindu Mahasabha to mark the VHP’s golden jubilee. Initially intended to be a show of strength, organisers prepared the compound at Jawaharlal Nehru Stadium in Delhi to accommodate around one lakh people. But the VHP said that the rain throughout the day played a spoiler, with many people leaving the venue before the event finished.

He specified three temple-mosque disputes that the BJP-led Modi government must look into — the Ram Janmabhoomi and Babri Masjid in Ayodhya, the Kashi Vishwanath temple and Gyanvapi mosque in Varanasi and Krishna Janmabhoomi and Shahi Idgah mosque in Mathura.

“Who says mosques can’t be demolished? In Saudi Arabia, they do it for the construction of roads or schools. We can do it here. Our government should give notice to those in Mathura and let them know that this is Krishna Janmabhoomi,” Swamy said.

Speaking at the event, VHP’s international working president Pravin Togadia said Congress president Sonia Gandhi and SP chief Mulayam Singh Yadav should ensure passage of a Bill in Parliament to prevent religious conversions. “Are they against conversions or are they against Hindus? There is nothing wrong with ‘ghar wapsi’. Let there be no conversions, but say yes to ‘ghar wapsi’,” he said addressing the gathering.

Togadia claimed that Hindus weren’t safe in India and warned that states like West Bengal, Assam and Kerala would soon be “devoid” of Hindus. Togadia also slammed US President Barack Obama for his recent “religious intolerance” remarks, without naming him. “We don’t need sermons from those who failed to prevent an attack on a Hindu temple in their country,” he said.

New Delhi: Amid the raging row over Mohan Bhagwat’s remarks on Mother Teresa, RSS Sunday reiterated its demand for an anti-conversion law to check the “rising incidents” of religious conversions in the country. Suhasrao Hiremath, the Akhil Bharatiya Saha Seva Pramukh of RSS said: “We have nothing against people who convert voluntarily. But considering rising incidents of such conversions, government should enact a law,” he said.   (PTI)

How to make Bharath a Hindu Rashtra by “Hindu Voice.”