Global Hindu Heritage Foundation (GHHF) conducted a Seminar on the Protection of Hindu Temples at Anand Conference Hall in Bhimavaram on January 19, 2014. The main purpose of the seminar was to inform the local people and community leaders about how the movement was started in USA, efforts done so far, and prospects of the protection of the Hindu Temples and possible survival of Hinduism itself. The seminar impressed upon the attendees that it is the Hindu ethos and morals that have laid the foundation for the Bharata samskriti. If that is not nourished, protected, and promoted; the whole universe will be in turmoil since Hindu way of life propagated the philosophy of Vasudaika Kutumbam (universal family), Ahimsa (nonviolence) andSarve Bhavantu Sukhinah (May all be happy). There is no sectarianism in thinking and practicing the Hindu ethos. It is always an inclusive philosophy, never exclusive.

One of the founders of GHHF, Dr. Prakasarao Velagapudi, narrated the incident that resulted in the formation of the organization in USA in 2006 with a mission to preserve, promote and protect Hindu Temples as well as Hinduism. He mentioned that through the passage of Hindu Charitable and Endowment Act, most of the Hindu Temples earning Rs. 50,000 per year were taken over by the state governments in all four Southern States – Andhra Pradesh, Karnataka, Tamil Nadu and Kerala. No such act was passed to take over the Christian Churches and Muslim Mosques. This Endowment Act is totally discriminatory undermining the very fabric of Hindu Temples. Governments in these States have sold the Temple land, allowed encroachment of the lands, sold them at ten percent of the current values of the lands, illegally took over for the execution of government projects without proper compensation, failed to properly account for jewelry, involved in the scams of ticket sales, abused the VIP system, allowed unions at TTD to blackmail the TTD executive officers, neglected the renovation of the Temples and Rajagopurams, allowed the Rajagopurams to collapse, diverted Hindu Temple money to Christians and Muslims, and many such issues. He mentioned that Hindus are mainly responsible for the plights of these Temples since overwhelming majority of them were involved in these scams, illegal occupation and mismanagement. Hindu are destroying the Hindu Temples and demeaning the Hindu culture. He traced the efforts undertaken by GHHF over the last eight years and urged all Hindus to wake up from the slumber and be active.  We may see the demise of our culture unless every Hindu becomes an active volunteer to protect it.  The main goal of GHHF is to make every effort and support all the organizations to make sure that the Supreme Court repeals Endowment Act.

Dr. Ghazal Srinivasrecounted the events that lead to the production of “Devalayam” CD to make Hindus aware of the importance of Hindu Temples, which are the foundation for the very basic structure of Hinduism. Once we loose Temples, we loose our culture and our heritage. It is the dharma of every Hindu to protect the Temples since entire Hindu culture is rooted in them. We were blessed with many historical and mythological Temples that were once inaugurated by great Rishis. We have Jyothirlingas, Pancha Rama Kshetralu, Devi Temples and many sacred Temples.  Now, they are in dilapidated situation. In the name of Secularism, other religious people are being allowed to abuse our Temples by the government. Keeping this situation in mind, GHHF is undertaking steps to find ways to upkeep these Temples. Foreigners who came to India were enchanted by the sacredness of the land. Dr. Martin Luther King, the civil rights activist, said that he visits Bharath as a pilgrim but not as a traveller. He enumerated the issues facing the priests, their family situation, their salaries, health schemes etc. by saying that these issues must be addressed in order to keep them as priests in the Temples. We need to form an AP Hindu Temples Service Board to manage the temples once they are freed from the government.

Sri Nalla Surya Chakradhara Rao, Executive Officer of Maavulamma Temple in Bhimavaram, informed that Hindu Charitable and Endowments Department is working to preserve the integrity of the Temples. It also has taken steps to renovate the Temples that were in bad condition. Many devotees feel that the Department has not been serious about managing and protecting the Temples. But the department is undertaking many activities by seeking guidance from the Hindu community. Some temples have Annadana schemes providing food for the pilgrims. During the festival and auspicious occasions, they are conducting programs consistent with the traditions and sampradayas. Archakas are being treated equitably through the assistance provided by the community. In the future the department will do more for the welfare of the archakas.

Sri Vabilisetty Srivenkateswarlu, President of Vishwa Hindu Parishad, West Godavari District, talked about the greatness and richness of Sanatana Dharma and how it shaped the world view with it’s philosophy and morals. It has influenced the world with its scientific knowledge, philosophy, art and culture, karma theory, yoga and meditation and so on. Our religion is the embodiment of tolerance and patience. Other faiths take our benevolence as our weakness. If we do not protect our Sanatana Dharma at this age, we will become second-class citizens. Now all Hindus should wake up and shoulder the burden of protecting the Hindu Temples if we have to remain as Hindus in the future.

Sri Shyam Prasad Mukherjee, Secretary, Hindu Dharma Prachara Parishad, observed that Hindu Temple lands, properties, and resources are being abused and misused. Bills have been passed not to sell the Temple lands in 1966 and subsequently changed in 1987 and 1990. But the sale of Temple lands still continues. The lands valued at Crores of rupees in Tanuku, Palangi and Karampudi (in Guntur District) are being litigated for many years with no resolve from the courts. The protective measures that the government has taken to preserve the integrity of Waqf properties and Christian properties, have not been applied to Hindu Temple lands. The government has occupied thousands of acres of Temple lands without proper compensation and distributed them to the poor for political mileage. Government is failing to pay adequate salaries for the Priests and neglecting the 1993 Supreme Court decision to provide proper compensation. It is high time that the government takes appropriate actions to protect the Hindu Temple lands and other properties.

Sri Garimella Venkata Ramana Siddhanti,Peethadhipathi of Veerapalem, said that the Hindus are striving hard to have the darshan of their chosen Gods and Goddesses without even thinking of protecting the Temples they go to seek blessings from them. Devalayas are fulfilling a great responsibility to Hindus. They provide Annadanam, which is extolled by scriptures as the greatest danam (charity). The priests who are working in these Temples are rendering great service given the conditions they are facing. The guidelines set by our rishis to operate the Temples are being neglected. All the problems that Hindus are facing today are the consequence of the near neglect to follow the scriptural sanctions. Devotees come to the Temple to redress their problems and experience peace of mind. Devalayas have always provided Annadanam and prasdam to the pilgrims. He urged every one to do Annadanam to at least ten people. We have been spending huge sums of money taking care of the impermanent body while neglecting to protect the most sacred and enduring Devalayas. On his part, he is providing Annadanam to nearly 150 Temples to the visiting devotees.

In Question and Answer session, some information was passed on to the attendees. It was informed that Pujya Dayanada Saraswathi has filed a case in December 2012 in the Supreme Court to repeal the Endowment Act. Dr. Subramanian Swamy agreed to defend the case. Request was made to the Endowment Officials that all the Priests should be granted Arogyasree privileges and their salaries must be upgraded to attract more people from their families. Also it was suggested that a crash courses should be offered to individual irrespective of the caste to train them as Priests to be placed in the villages and especially in Dalit communities.

ATTACHMENTS:
PICTURES: attached are the pictures taken at the Seminar. 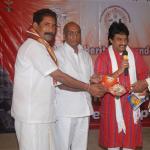 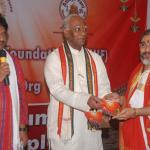 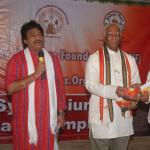 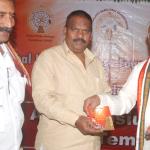 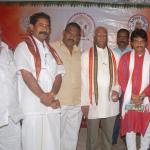 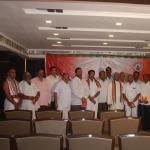 More photos you can view at 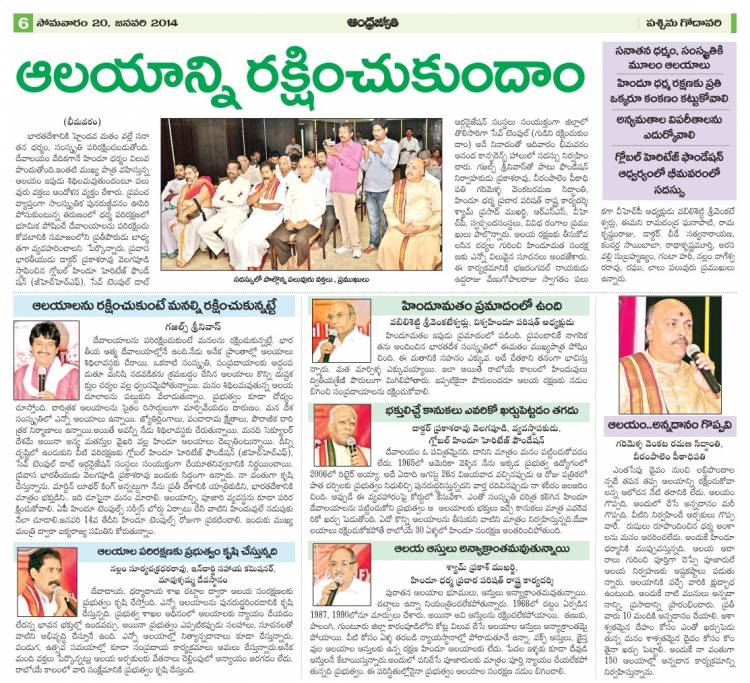 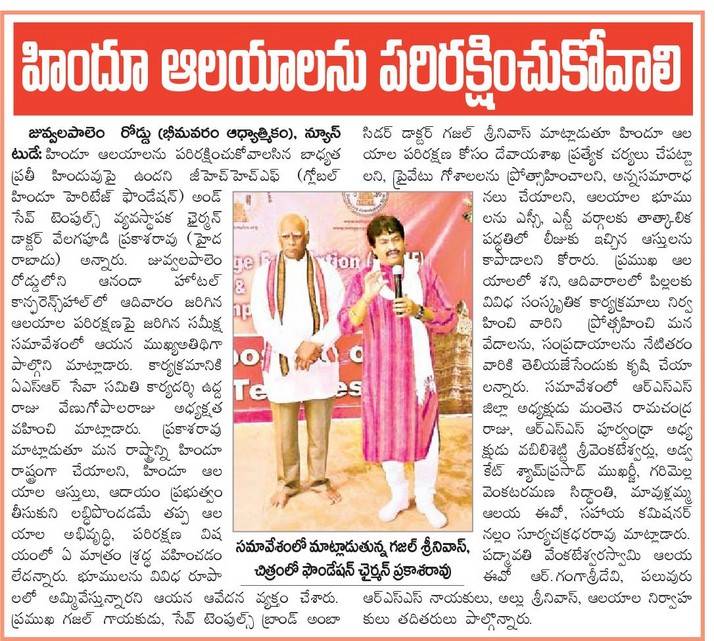 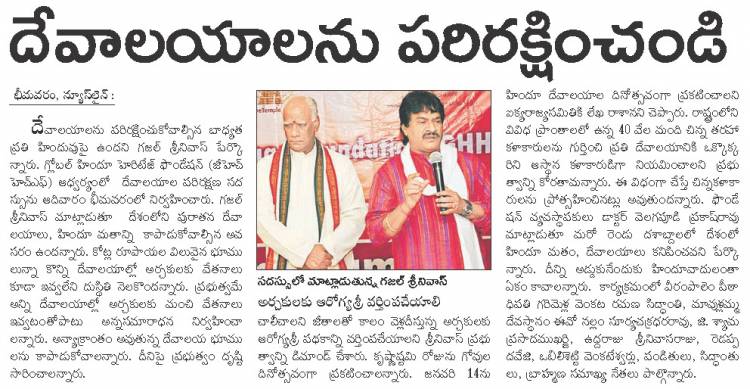 Glance - A symposium on savetemples Bhimavaram

NOTE: GHHF is exempt from federal income tax under section 501 (c) 3 of the Internal Revenue code.    Our tax ID # 41-2258630
Please send your tax-deductible donations to:
Global Hindu Heritage Foundation,
14726 Harmony Lane, Frisco, Texas 75035
You can go to http://worldpeaceactivists.org/savetemplestest and pay by PAYPAL.

GHHF asked English Medium should be withdrawn in A.P. and Telugu Medium in classes from 1 thru 6 should be continued.