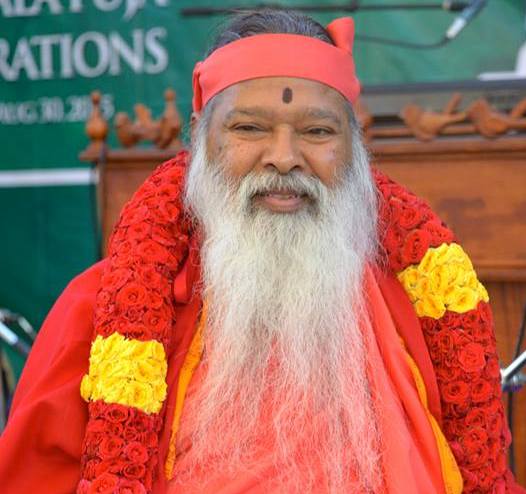 Karya Siddhi Hanuman Temple was inaugurated by Sri Ganapathy Sachchidananda Swamiji on July 23, 2015. in Frisco, Texas USA. More than 15,000 witnessed the Kumbhabhishekam and had darshan of Lord Hanuman made of emerald. The Hanuman Temple is unique in many respects. 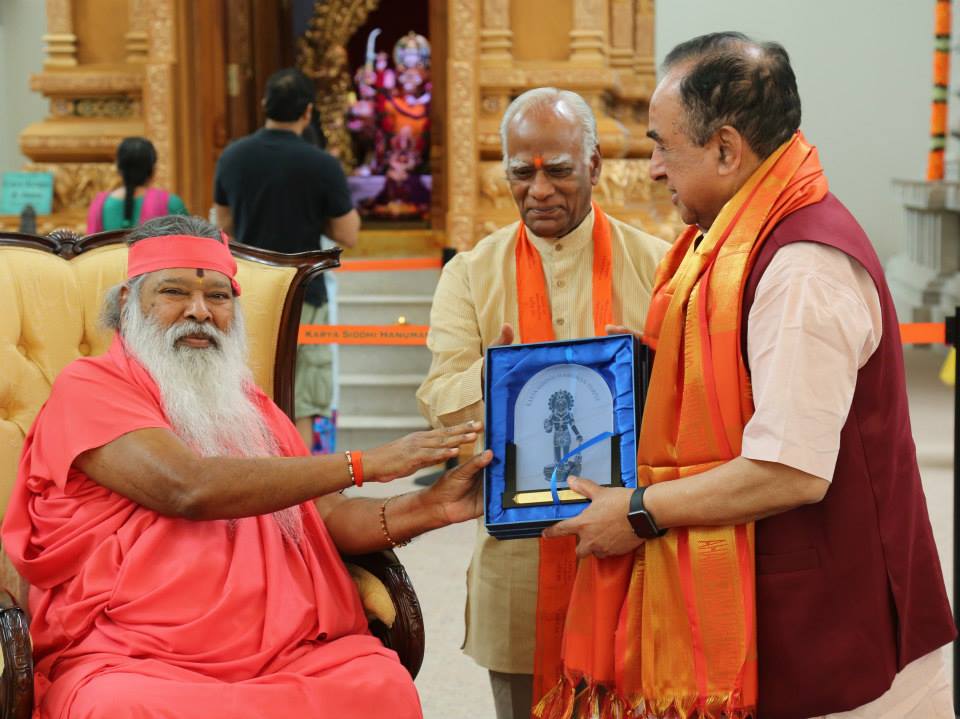 Hanuman Vigraha is made of Marakata (emerald stone). No other temple in the Western hemisphere has Hanuman made of Marakata.  The murthis of Hindu deities such as Ganapati, Shiva, Durga Devi, Ram Parivar, Dattatreya, Subrahmanya, and Navagrahas are also installed. Its history goes back to 2007 when Sri Swamiji indicated His sankalpa to have a Hanuman Temple in Dallas. In January 2008, ten acres of land was purchased.
Within a year 10, 000 square feet building was inaugurated. Half of the facility was used as a temple and other half for Sunday school for children to teach about Hinduism and other facilities. In 2013, Sri Swamiji did the ground breaking ceremony to a brand new traditional Temple. In two years with the help of nearly 30 shilpis, the present Temple was completed just before the Kumbhabhishekam day. 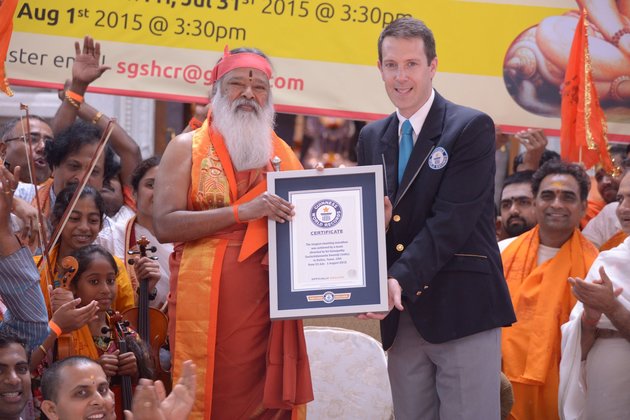 There are many unique aspects to this extraordinary and amazing temple. Shiva Linga and panavattam are made of crystal. The size of the Temple is 34, 000 square feet. The Prayer Hall size is 14,000 square feet which accommodates more than 4, 000 people. The height inside the prayer is about 28 feet. Very imposing with lots of energy and power.
Many people feel that it is like an Agraharam where more than hundred devotees of Sri Swamiji live on three sides of the Temple which is located in a ten acre lot. Shilpis from worked very hard carving every inch of the Temple to make it a masterpiece. The colors of the painting of the Temples inside and outside are breath taking, amazing and astonishing. 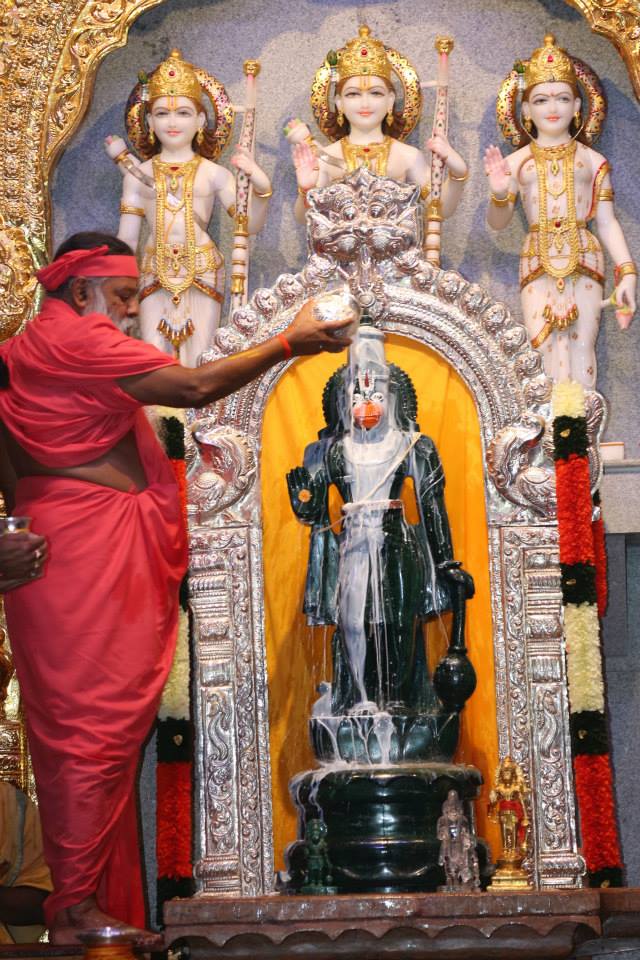 Our Sadguru Sri Ganapathy Sachchidananda Swamiji decided to participate in Mandala Puja - meaning he stayed here in Frisco Texas for fortydays from the day of Kumbhabhishekam, which is extraordinary for Sri Swamiji to stay in one place considering that He is an Avadhuta. Sri Swamiji is spending enormous amount of time to create lots of energy to bless the community before he left on Dallas on 1stSeptember. This temple is one of its kind.
Many dignitaries visited the Temple – S P Bala Subramanyam, Sri Mani Shankar, Dr Subramanian Swamy and others. Sri Swamiji conducted the Healing and Mediation concert in the new Temple. Guru Purnima was celebrated with more than 3000 devotees across the globe. More than 60 middle School teachers visited the Temple to learn about the significance of the Temple. Many Americans visited the temple on a regular basis who appreciated the architectural wonder to be found in their own backyard. 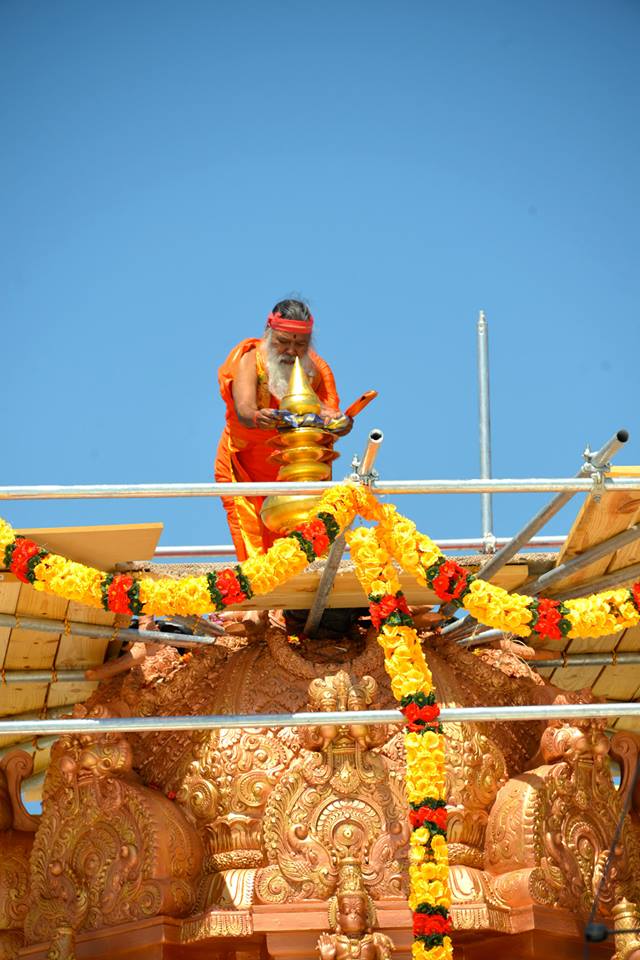 Sri Swamiji received Guinness World Records for organizing 24 hour continuous chanting of Hanuman Chalisa by 582 devotees.  Sitaram Kalyanam was also conducted in the Temple. Sri Venkateswara, Bhudevi and Sridevi Utsav murthies were donated by Sanatana Dharma Foundation who conducted Kalyanam on July 12.The following 30 minute video presentation will give a glimpse of this marvelous and memorable, miraculous temple. Please enjoy. Have a feast for your eyes and soak yourself in the everlasting vibrations.
Please watch YouTube presentation on Hanuman Temple inauguration.

Hindus are doomed to repeat the history, if they fail to know the Christian atrocities on GOA Hindus