(NOTE: This is the third part of the article focusing on Lord Shiva.  In the previous articles, we discussed the need for understanding of the symbols and myths; and narrated the stories and symbols of Lord Ganesh; and also Lord Subramanya, Lord Hanuman and Goddess Durga.  These lectures were given in January 2017 to Austin College, Sherman, Texas USA).

He is one of the Gods of trinity responsible for destruction and rejuvenation. He dwells in Mount Kailash, one of the coldest places. He is lauded as Rudra in Rig Veda as "the lord of songs, the lord of sacrifices, who heals remedies, is brilliant as the sun, the best and most bountiful of gods, who grants prosperity and welfare to horses and sheep, men, women, and cows; the lord of nourishment, who drives away diseases, dispenses remedies, and removes sin; but, on the other hand he is the wielder of the thunderbolt, the bearer of bow and arrows, and mounted on his chariot is terrible as a wild beast, destructive and fierce." 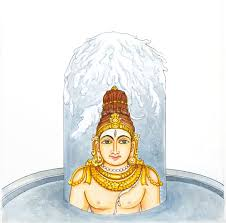 As per Siva Purana, Brahma and Vishnu were engaged in an argument as to who was greater. At the request of many other devas, Siva appeared before them in the form of effulgence, called Jyotirlinga. Brahma and Vishnu surprised to see the light and tried to find out the source and the end of the light. They decided whoever either the end of the Jyotirlinga would prevail as the greater. Vishnu mounted his boar (Varaha) and tunneled downward through the nether worlds; Brahma, mounted his swan (hamsa), soared through the upper worlds. Failing to find the bottom, and totally exhausted, Vishnu returned to the surface exhausted unable to find the bottom of the light.  Brahma returned and started boasting by saying that he found the top of the light. Suddenly Lord Siva appeared in the middle of the Jyotirlinga and unequivocally declared Himself as greater since he is beyond their understanding of his power.

Three Eyes. His right eye represents the sun, left eye moon and the third eye represents fire. The third eye symbolizes spiritual knowledge and power. It is also called the eye of the wisdom. The gaze of third eye can annihilate the evil or anybody who is in the purview of his gaze.

Ashes – His body is smeared with ashes to represent to remind us that material existence is not permanent. Everything ends in ashes. It represents the transcendence of physical body. 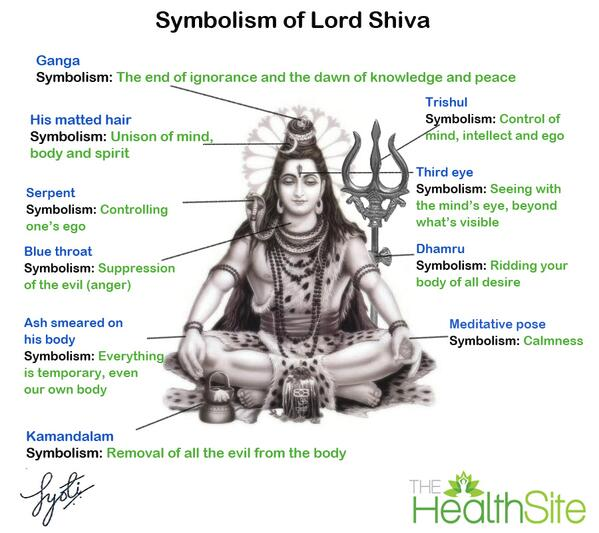 He holds Trisula (trident) that represents three Gunas – Tamas, Rajas and Sattva. Also, it represents will (itcha), action (kriya), and knowledge (jnana). It is expected to remove the ignorance.

Damaru in his right hand represents Nada Brahma from which OM was emanated and from which all languages were formed. Sanskrit language was born from that Damaru. It produces different dissimilar sounds. Eventually, they all merge to create one sound like OM.

Crescent moon on his head represents waxing and waning of the moon symbolizing the time cycle. It represents the cyclical nature of the universe and the changes the world goes through.

Sacred Ganga. It flows from his matted hair. Ganga is sacred to all Hindus. They are expected to take bath once in their life. It signified that Lord Shiva will purify the souls, remove ignorance, bestows knowledge.

Snake. It represents alertness. It represents the ego; once controlled, it becomes an ornament, not poison. The five hoods represent the five senses such as sight, hearing, taste, smell and touch; five organs such as eyes, nose, ear, tongue and skin; panchabhutas namely earth, water, fire, air and ether. They also represent the five Pranas – prana (forward moving air), Apana (air that moves away (elimination), udana (upward moving air), samana (balancing air) and vyana (outward moving air). These life forces are within the body hissing like the serpent.

As per Linga Purana, Linga is devoid of smell, color, taste.  It is also symbolic of the regenerative power. 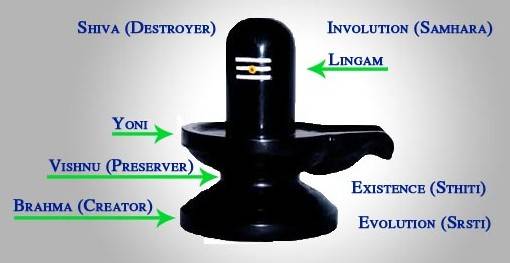 The Pineal Gland (in the MIDBRAIN) known as the master gland, is responsible for all the chemical producing glands in the body  (Like Shiva runs the whole Bramhanda ).Pineal gland runs the whole body called "Pindanda"

This Pineal Gland is what we see in the form of a SHIVLING. At the physical level it works as Master gland responsible for the production of Amruta, Somaras (serotonin, pinoline melatonin, and DMT5).

One finds the Shiv-ling placed in the DARK sanctum of the temple.  Medical science says, Pineal gland is productive, only in total darkness.

Shiva is known as Nataraja – king of dance. According to Coomaraswamy, the dance of 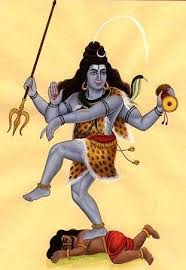 Shiva also represents his five activities: 'Srishti' (creation, evolution); 'Sthiti' (preservation, support); 'Samhara' (destruction, evolution); 'Tirobhava' (illusion); and 'Anugraha' (release, emancipation, grace). Many symbols are presented in this Shiva Tandava with different meanings. Circle of flames represent cycle of energy; third eye represents omniscience and enlightenment; four hands represent four directions; Abhaya mudra indicates his message to mean ‘be without fear’; left hand pointing to the foot represents the liberation or salvation for the devotees; upper right hand holding the flame is a reminder of the destruction of the universe; crushing of demon by his left foot symbolizes the destruction of ignorance and evil mind.

About 8 feet Nataraja statue is placed in front of CERN, Geneva, the world’s largest center for scientific research. In fact, scientists discovered that subatomic particle performs energy dance – a continuous pulsation process of creation and destruction of the whole cosmos. That means Shiva’s dance is the dance of subatomic particle.

Mahasivaratri (the Great Night of Siva) is the major festival dedicated to Lord Siva celebrated every year either in February or March. The Founder of our Hanuman Temple, Sri Ganapathy Sachchidananda Swamiji stated that “Shiva is the Supreme Lord who creates, sustains and annihilates all universes. Worshipping Him, fating, staying awake all night, offering bilva leaves and performing water Abhishekam on Shivaratri bestows unlimited and unimaginable merit.”

By being awake the whole night (jaagran), it helps a devotee to control the two great natural forces that afflict a man, rajas guna (the quality of passionate activity) and tamas guna (the quality of inertia). It means a devotee is able control evils like lust, anger and jealousy, born of Rajas.  By observing vigil throughout the night, he manages to conquer the evils of Tamas Guna.

Fasting detoxifies the body. So, to cleanse the body and make the mind alert, calm, and peaceful, fasting is done on the day of Mahasivaratri. 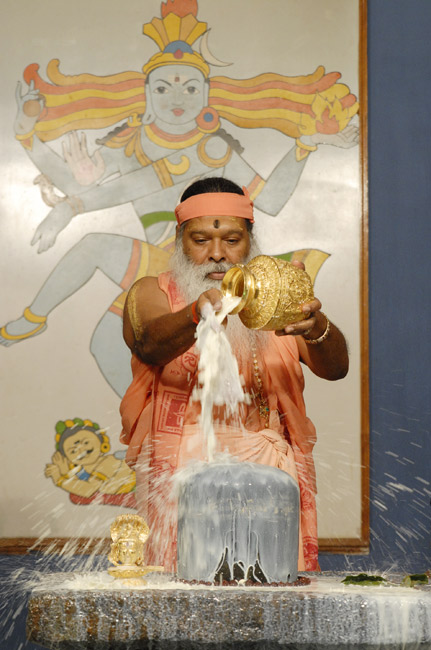 Bilva leaf is trifoliate which signifies the holy Trinity: Brahma, Vishnu and Shiva. It also signifies the three eyes of Lord Shiva. Bilva leaf has the natural characteristic to attract the Sattva or the positive energies towards itself. he sacred tree can cure problems like bleeding gums, dysentery, asthma, jaundice, anemia etc. Hence, Belpatra is extremely important in Hinduism.

[GHHF] First request to the President and FAS of Harvard to meet with Dr. Subramanian Swamy