"From the earliest times divine and many of the great pilgrimages of Hindu India were focused upon sacred rivers such as the Ganges, Indus, Yamuna, Krishna, Godavari, and Brahmaputra.’ Henri Bergson, French Philosopher. 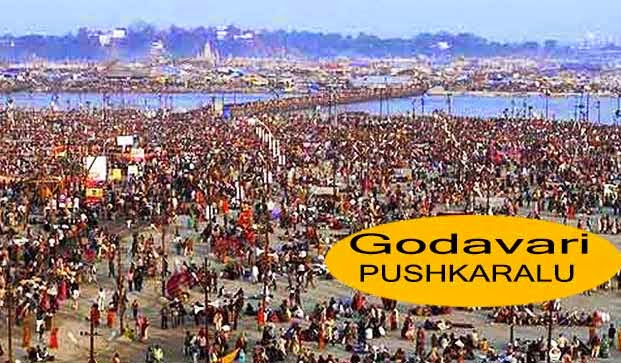 During Godavari pushkarams, pilgrims from all over the country will descend on the banks of Godavari River to have a holy dip with the belief that they would be relieved from all sins, and perform rituals to departed souls. It is believed that during pushkaram, all devats (deities) and rishis take holy dip to purify and make the rivers sacred. Thus, a holy dip in Godavari which will enhance one's spiritual mental and physical abilities.

The river for each year festival is based on the presence of Jupiter on which Zodiac sign by that time. The pushkaram lasts for a period as long as the Jupiter remains in that particular Zodiac sign. It is believed that Pushkaradu, also known as pushkar God who is powerful to make any river holy will travel with Jupiter as ordained by Lord Brahma, as Jupiter travels from one Zodiac sign to another Zodiac sign. Pushkaram is a festival of rivers pertains to 12 important rivers in India which occurs once in 12 years for each river

When Jupiter enters Leo, Godavari Pushkarams are conducted. Following is the table that show the which river conducts pushkarams based on the entry of Jupiter into different zodiac signs:

What is the Origin of Godavari River? 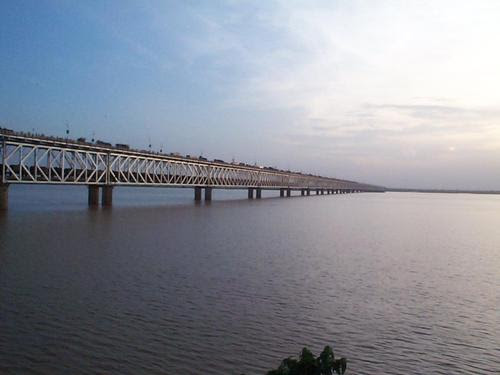 According to Shiva Purana, Sage Gautama did great tapas (deep meditation) to request Varuna Deva to rain on Brahmagiri Mountain where there was a hundred year drought in the area. Varuna Deva denied his request. Then Gautama asks for "divine everlasting water yielding permanent results." So Varuna tells Gautama to dig a ditch, and then Varuna fills it with divine water and says this:

“O great sage, let there be a perennial supply of water in this ditch that has become sacred. This will becomes famous on the earth by your name. Charitable gifts made here, rites performed here, penance pursued here, the sacrifices done here for the gods, and the Shraddha offered here to the manes, everything will be imperishable.”

Later in the Siva Purana, we find that Gautama asks Lord Shiva for Ganga to be brought here in to Godavari so that everybody will be washed of their sins. When Lord Shiva request Ganga to flow in Godavari, Ganga says that she will agree to stay here only if Shiva also stays here. Lord Shiva manifests himself as Tryambakeshwara at Triambak in Nasik District, which is the source of Godavari River.  Godavari is also called as Gauthami since Sage Gautama was responsible for the creation of this sacred river. 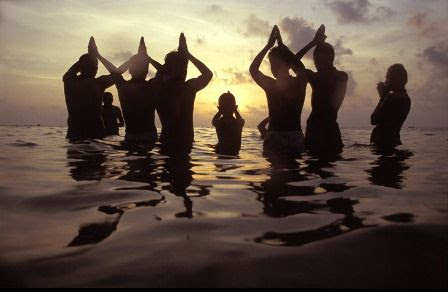 In Vedic texts, water is referred to as Apah, considered as sacred and treated as purifier. The Waters are considered to be purifying in a spiritual context. ‘Hail to you, divine, unfathomable, all purifying Waters…’ (Rig Veda).

The Rig Veda identifies the Waters as the first residence or ayana of Nara, as well as the very foundation of this universe. Satapathi Brahmana says, ‘Water may pour from the heaven or run along the channels dug out by men; or flow clear and pure having the Ocean as their goal…In the midst of the Waters is moving the Lord, surveying men’s truth and men’s lies. How sweet are the Waters, crystal clear and cleansing…From whom… all the Deities drink exhilarating strength, into whom the Universal Lord has entered…’

Early Vedic tradition identified water as a manifestation of the feminine principle, known commonly as Sakti. Rig Veda observed, ‘I call the Waters, Goddesses, wherein our cattle quench their thirst; Oblations to the streams be given…’ It is said that the primordial cosmic man or Purusha was born of the Waters. Similarly later Vedic texts identify that, ‘Water is female…’ (Satapathi Brahmanas). Vedic philosophy attributed sacredness to water and also identified water as a medium to attain spiritual enlightenment. In fact the Atharvana Veda declared water as ‘the first door to attain the divine order.’ The use of water in daily life as well as in ritualistic ceremony was referred to as spiritual sacrifice, a process of attaining eternity.

A cleansing bath was believed to liberate one from sin and impurity: ‘…Whatever sin is found in me, whatever wrong I may have done, if I have lied or falsely sworn, Waters remove it far from me…’ (Rig Veda). 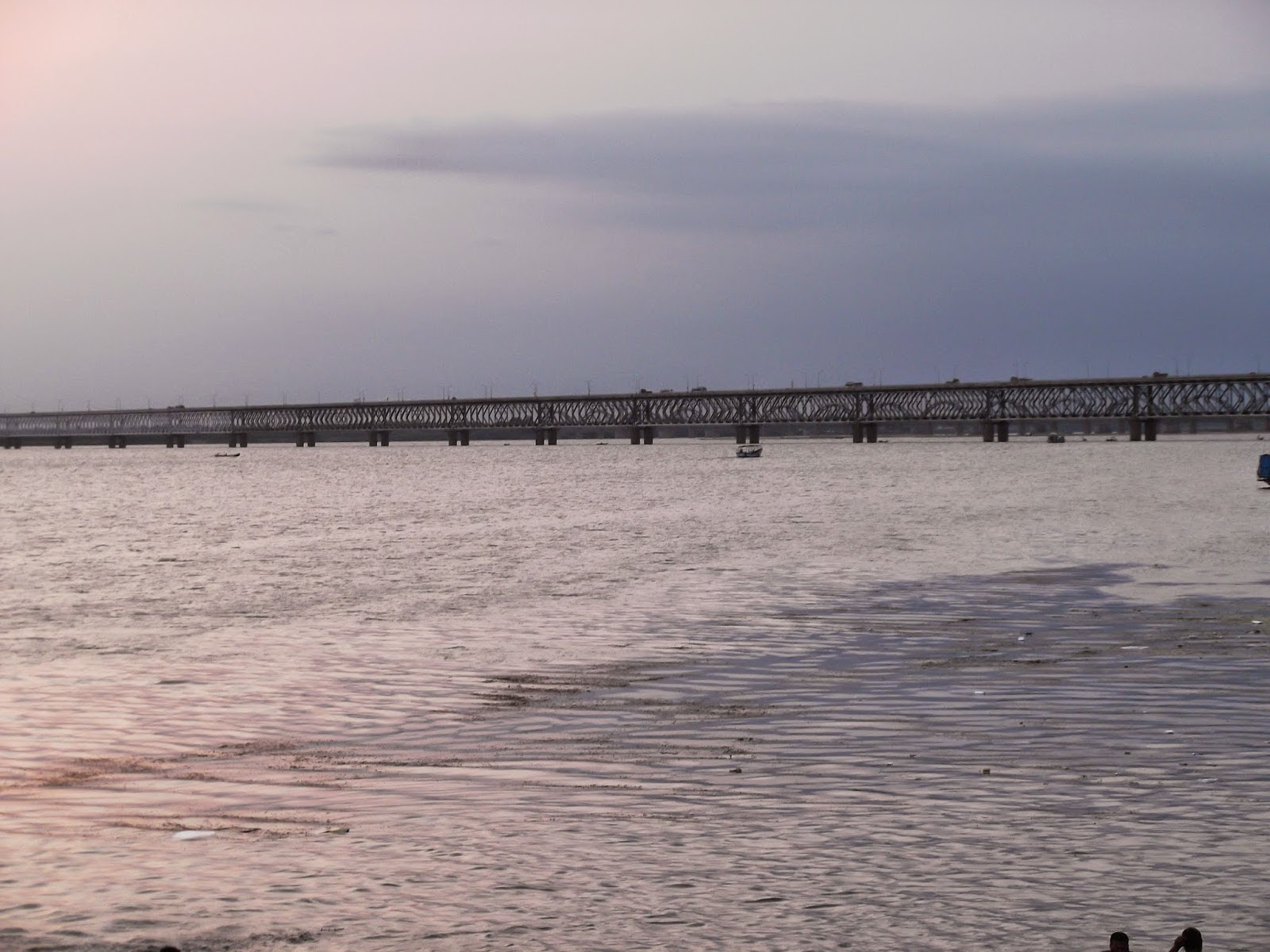 Water is considered sacred and pure. There is no life without water. Rig Vedaemphasizes the importance of water as thus: “The waters which are from the firmament and which flow after being dug, and even those that spring by themselves, the bright pure waters which lead to the sea, may those divine waters protect me here.”

The act of bathing was considered intensely spiritual and it was believed that physical acts of imperfection were removed and spiritual oneness with the Eternal Self was attained during the process. According to the Vedas, it was not the act of taking a bath itself, but the coming into contact with the sacredness of water, and the attainment of such knowledge and proximity that made one sinless and guided the individual to the Eternal Self. Water was considered sacred but it was clarified that man does not pray to water, the physical entity, but to the source of life and spirituality within water. 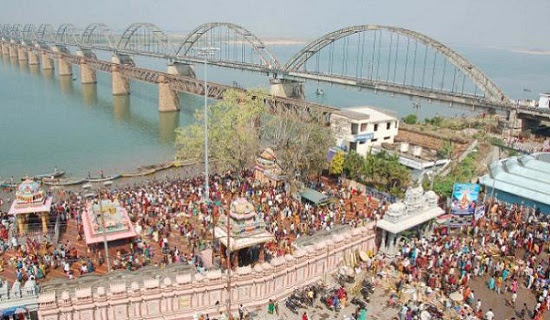 There are several meanings or stories associated with the name.   One explanation says that Pushkara is a Sanskrit word derived from the word Push (Pushti) meaning nourishment and Kara means one who conducts it. Pushkara is the energy that nourishes. With reference to the sacred rivers, Pushkara means the one who energize the rivers and provide spiritual purification.

Second, Pushkara also means Lotus, sanctified water, Swan, Sword, Sky, Lake Etc.  In Sri Vishnu Sahasranama Stotram we find a reference to the word Pushkara where Lord Sri Maha Vishnu is referred to as Pushkaraakshah meaning the one who has lotus eyes, the one who provides nourishment to the entire Universe and the one who is always present in sacred Theerthas. In Tirumala Kshethra the water tank near Sri Varaha Swamy temple is known as Swamy Pushkarini.

Third, Pushkar is the name of a famous pilgrim center known as Pushkara Kshethra located in Rajasthan about 17 km from Ajmer city.  According to one legend, Lord Brahma desirous of having a place on earth, he supposed to have thrown three lotus (pushpa) petals toward the earth. When the petals landed, three holy lakes sprung up – one for each petal.  Because the lakes had been created from the flower (pushpa) thrown from Brahma’s hand (Kara), the area became known as Pushkara. The three lakes are known as Jyeshta Pushkara (“senior Pushkara”), Madhya Pushkara (“middle Pushkara”), and Kanishtha Pushkara (“junior Pushkara”). 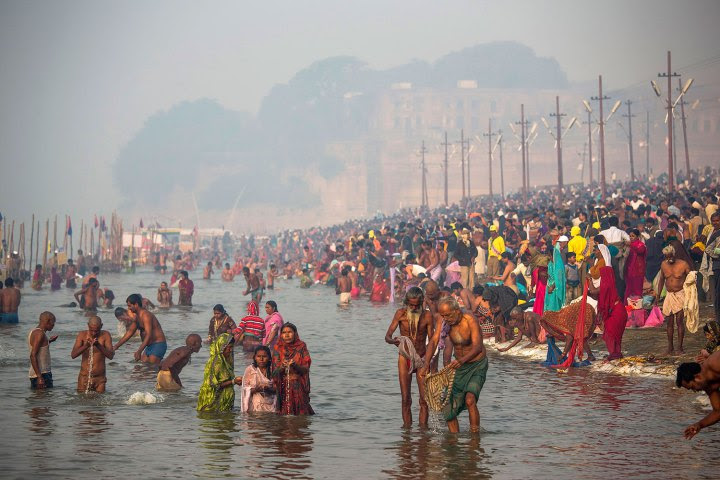 Jupiter (Brihaspati), the Deva guru (guru of Gods), is the most benevolent planet symbolizing the wealth, fortune, learning, knowledge, divinity, progeny, domestic peace, charity, morality, meditation, devotion, auspiciousness and responsible for curing ailments affecting the stomach. Whenever Pushkara enters the zodiac sign facilitating him to enter into a particular river is considered as highly sacred and that has the power to diminish the ghastly and dreadful sins committed. Taking bath in the river, having darshan of the river , and touching the water or sipping the sacred waters of Pushkara is considered to be highly meritorious, spiritual and soul cleansing.  Performing Shraddha ceremony to forefathers on the banks of Pushkara River is believed to attain salvation.

Taking bath in a Pushkara river will help to cleanse the inner selves, wash out the evil tendencies and open up a path for a righteous living.  This bath should be taken early in the morning before Sunrise during Brahmi Muhurtham which is highly meritorious time.  It is believed that Pushkara Snana also has curative properties from chronic ill health.  After Pushkara Snana one has to pray and give Arghya to the concerned Pushkara Theertha (River), Theertha Raja (Pushkara), Brihaspati, Lord Vishnu who is eternally present in all the Theerthas, Brahmaadi Devatas, Vasishta Sage, Ganga River and the Sun God (Sri Surya Narayana). 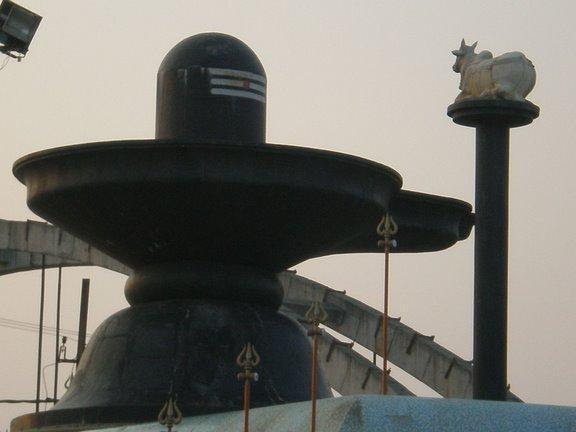 Andhra Pradesh Government and Telangana are making elaborate arrangements to accommodate as many as 5 crore devotees to attend and take bath in Godavari at different locations along the river. A giant size Siva lingam is being prepared will be a special attraction to devotees in Rajahmundry. Water is drawn from Godavari to do Abhishekam to Siva lingam thereby facilitating the    pilgrims to take bath under showers. Officials are building big Snana (bathing) ghat of 1200 meters which is first biggest Snana ghat allover India.

The Main Godavari Pushkar Ghats will be located at Basra in Adilabad, Dharmapuri and Vemulawada in Karimnagar and Bhadrachalam in Khammam. A total of 67 pushkar Ghats will be constructed along the river in the five districts, Advisor to the government on Culture K.V. Ramanachary told media persons after a meeting to review the arrangements. The meeting was convened by Chief Secretary Rajiv Sharma.

Global Hindu Heritage Foundation (GHHF) & Savetemples.org announced a “Photography Contest on Godavari Pushkaralu 2015”, which is going to be celebrated from 14th July 2015 to 25th July 2015.

Each photographer can send 10 pictures with his bio-data, e-mail id, phone no. and duly filled application form (available at www.savetemples.org) along with undertaking. Entries should reach us on or before 5th August, 2015 along with Application, Undertaking, DVD and Your ID Proof.

Winner’s prizes are awarded as follows:

All the entries will be given an appreciation certificate from organizers. On behalf of the Board of Directors of GHHF, co-founder President Prof. Velagapudi Prakasarao and Brand Ambassador Dr. Ghazal Srinivas announced that the photos can be sent by DVD format with high resolution.

Image data files created with any digital devices including smart phones, digital still cameras (including medium and large-format cameras). Images that have been retouched using software or by other means will be accepted. Retouched photography using camera app or photo editing app is also accepted. Both color and monochrome images will be accepted. We will not be accepting any entries taken on film. Scans of photographs taken by film cameras are not eligible. Photographs are to be taken in Godavari Pushkaralu 2015 only. The standard color space for the judging process is sRGB.
The entries can send through post/courier to the address given below.

Those who are interested should submit their online entry through the participation form available on www.savetemples.org website on or before 30th June 2015.

DONATIONS
As many of you know that SaveTemple Office was opened in June 2012 in Hyderabad.  Office is located in Khairatabad. Four full time employees are working on the update of our website, Aalayavani Web Radio, Aalayavani magazine, conducting various activities to preserve and protect Hindu Temples and Culture. Our budget is approximately 2 lakh rupees per month.  We request your generous donation to conduct activities to promote unity among Hindus and restore the glory of Hinduism.

Why Cow is Sacred? Scientific Evidence Reveals the Benefits of Cow Products

[GHHF] Priests Go On Strike, Some Temples Closed; Devotees disappointed; Salaries for Priests not Fixed even after Supreme Court directive 13 years ago