With this, you do nourish the Gods and may those devas nourish you; thus nourishing one another, you shall attain the Highest Good.Bhagavd Gita 3:11 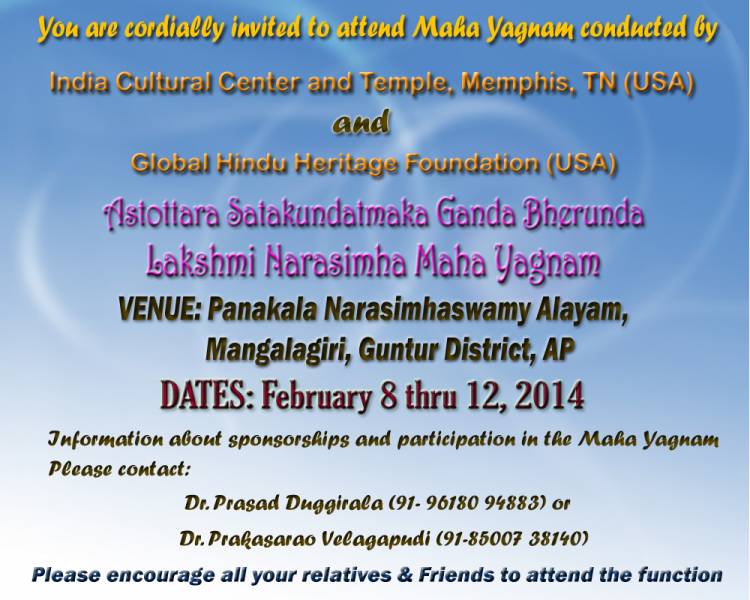 Every element in the universe is interrelated and interconnected. Reciprocity is the very essence of the existence and sustenance of the universe. This sloka (Bhagavad Gita 3:11) is the kernel of the philosophy of give and take. It is nothing more than karma theory. That means if you do something good for others, Gods, and environment, you will receive the appropriate reward. In order to receive some benefit, reward, blessings, happiness, fulfillment of desire, activate dormant potential, avoid possible problems, and neutralize maleficent forces, we have to engage in doing service to the constituent elements of the cosmos and participate in yajnas (sacrifice). In fact human life itself is yagna. Mutual help is the foundation of human existence. Yagna (sacrifice, offering) sustains the balance in the cosmos.

Vedas and many other scriptures enumerated the importance and virtues of Yagna. What is a Yajna? It is a religious duty performed by a group of priests involving Agni, the sacrificial fire, with the chanting of appropriate Vedic mantras depending on the kind yagna addressed to a particular deva/Devata.  The word is derived from the root "yaj" meaning "to worship", to evince devotion. The main purpose of a Yajna is to seek blessings and /or please Paramatma and the various deities so that the senses, soul, mind, mental, body and/or the entire ecological system is purified.

Yagna is defined as any action done for the benefit of the mankind without any selfish motive. Vedas proclaim "YagnovaiVishnuhu" meaning service is Devine. In times of wars, pestilence and natural calamities, Vedas prescribe Yagnas (sacrifice) to restore peace and normalcy. Further more, Yagna is a life sustaining force as enunciated by lord Krishna in Gita: Yagnas produce clouds, from clouds rains, from rains grains, from grains the sustenance for all the beings.

Yagna is worship of God through three faculties (Thrikaranas - Manasa,Vacha,Karmana). Manasa:by meditating on the Deity; Vacha:By chanting the mantras Karmana:By offering Havis into Homakunda.  Agni is the messenger to gods and he delivers all the Havis and prayers to the Deity of the Yagna and the Deity in turn fulfills the desires of the devotee and bestows peace of mind and spiritual growth.

Yagna also purifies the atmosphere. Of all the yagnas dedicated to Lord Vishnu, AshtamukhaGandabherunda Narasimha Maha Yagna is the most powerful one. It helps to overcome your enemies (external & internal), restores health, bestows bliss and fulfils worldly desires.

In the summer of 2006, Dr. Duggirala Prasad, the Chairman of Hindu Temple and Community Center (HTCC) of Memphis was traveling by car from Memphis to Atlanta to see his newborn grandchild along with the Chief Priest, Sri Satyanarayana Charyulu. They were reminiscing about the progress made over the years about HTCC and discussing about Kumbabhishekam they had completed in 2005. They were remembering and appreciating Sri Ganapathy Sachchidananda Swamiji who had come for the occasion to conduct the ceremony.

As they were traveling, they were listening to a number of CDs of Sri Ganapathy Sachchidananda Swamiji including the composition of Jayalakshmi Mata Bhajans sung by Sri Swamiji. Sri Charyulu was enjoying listening to these songs and slowly dozed off.  Sri Ganapathy Sachchidananda Swamiji came into his dream and advised him to conduct GandaBherunda Lakshmi Narasimha Maha yajnam at the Hindu Temple in Memphis. Then suddenly he woke up and informed Dr. Prasad about his dream. They were discussing about the practicality of conducting Maha Yajnama, wondering as to why Lakshmi Narasimha Maha Yajnam, what of image should be worshipped, what mantra to be chanted and other questions.

Sri Satyanarayana Charyulu while listening to Sri Swamiji’s songs and thinking about host of issues related to the Maha Yagna, he dozed off again. Sri Ganapathy Sachchidananda Swamiji came into his dream and told him that he should do Yagna with AshtmukhaGandaBherunda Lakshmi Narasimha Swamy and gave a mantra for him to do anushtanam (sadhana/chanting).  Sri Swamiji even told him about the eight faces that should be used while doing yagna. These faces of GandaBherunda Lakshmi Narasimha Swamy are as follows:

“Ganda” is defined as cheek or a face with forehead. “Bherunda” means terrible, ferocious and frightening. Lord Narasimha is a rare incarnation of Lord Vishnu, who is depicted in half man-half lion posture, and is mainly worshipped in South India.  Lord Narasimha as GandaBherunda is a combination of bird and animal with two heads and said to have manifested, as he was not able to control his anger. He took this incarnation to annihilate the demon King Hiranyakashapu, the father of the great devotees of Lord Vishnu, Prahlada. Lord Narasimha took a more terrible form of bird-animal with two heads – GandaBherunda. He believed to possess extraordinary strength. GandaBherunda used to lift four elephants effortlessly.

Maha Yagnam was conducted in 2007 in Memphis

India Cultural Center and Temple of Memphis, under the leadership of Dr. Prasad Duggirala and the Board of Directors, has conducted the first ever GandaBherunda Lakshmi Narasimha Maha Yagnam in 2007. This was a mammoth undertaking, which involved the construction of 108 Homa Gundas. More than 108 Priest came from all across USA and India to conduct this yagna for five days. Main purpose of this Maha Yagnam is to purify the environment, and bring happiness and peace in physical, psychological, social, spiritual and ecological spheres.  Sri Satyanarayana Charyulu who chanted a special mantra lakhs of times was offered at the end of Maha Yagnam for world peace and prosperity.

Mata Karunamayi provided the needed inspiration and guidance in conducting this 5 day Maha Yagnam. In fact She bless the event by Her presence and discourses during these five days.Mataji’s choice to guide the Maha Yagnamhas a special significance,since She attained siddhi and became a Yogini after twelve years of intense meditation in Penusila forest in AndhraPradesh which is a Holy Narasimha Kshetra.

With the help of Panakala Swamy Temple authorities, five days of Maha Yagnamis planned to be conducted in February 8 thru 12, 2014. More than 108 priests are being invited to participate in this spiritually charged event to man the specially constructed 108 Homa Gundas. Plans are being worked as you read this information and more details will be forth coming.

The Following Swamiji/Saints send their blessings to the Maha Yagnam.

More Details will be forthcoming soon.

GHHF Sign The Petition To STOP The Hateful Show Against Hinduism

[GHHF] Island Bali shuts down for introspection and Silence; Amazing Story; Will India ever learn the principles of Silence and Sacredness?

Misuse of TTD money for hockey tournament in Pulivendula