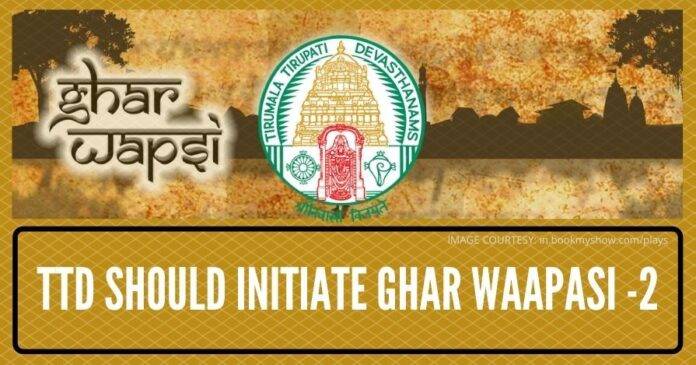 In this part, the author examines how Hindu Customs are adopted to deceive Hindu Community to convert it to Christianity

This is part 2 of the letter that was sent on August 27, 2020, to TTD Board Chairman and other officials to discuss and respond. Part 1 can be accessed here.

Let us examine some of the Hindu Customs Christians have adopted/digested to deceive Hindu Community to convert it to Christianity:

They have adopted these deceptive practices only to convert Hindus into Christianity. They have no backing from the Bible. It cannot satisfy the intellectual curiosity of the people. They cannot openly discuss the content of the Bible. It is full of killings, tortures, incest, sexual abuse, divisions, hatred, paedophilia, rape, and condemnation. It is worth remembering the words of the third President of the United States, Thomas Jefferson: “Millions of innocent men, women, and children, since the introduction of Christianity, have been burnt, tortured, fined, and imprisoned; yet we have not advanced one inch toward uniformity. What has been the effect of coercion? To make one-half the world fools and the other half hypocrites. To support roguery and error all over the earth.”

Mahatma Gandhi stated in 1935 that “If I had power and could legislate, the first thing I would ban is conversions.“

“Missionaries are perfect nuisances and leave every place worse than they found it.” Charles Dickens (18121870).

Swami Dayananda Saraswati repeatedly mentioned that “Religious conversion by missionary activity remains an act of violence. It is an act of violence because it hurts deeply, not only the other members of the family of the converted but the entire community that comes to know of it.”

Christianity is an aggressive religion intent on imposing their faith even at the expense of wiping out civilizations one by one. India is their target and they intend to destroy it at any cost. The end justifies the means. In the name of service, they enter the villages and convert the Hindus overnight with allurement, deception, and aggression.

In addition to allurement, taking advantage of sick people, providing false information in the application of jobs to work in Hindu Temples, they have shamelessly resorted to adopting Hindu customs to woo the innocent, illiterate and vulnerable Hindus. As B R Haran says, “The Church uses the process of inculturation with an aim to adopt the well-established Hindu cultural practices to confuse, corrupt and change the minds of the gullible masses.”

Maria Wirth says I could not believe any longer in its vengeful God who will throw me into eternal hellfire if I go against his commands, like not going to Sunday Mass, and who, in the same breath, is called very loving. Maybe I got a bit too much of Christianity in a Convent boarding school. It did not bind me closer to it but made me sceptical.”

“The Church may not kill any longer (it did earlier), but also sees Heathen as inferior and considers it as its duty to convert them all, which causes great damage to society.” (Letter written to Narendra Modi by Maria Wirth)

Christianity in India is more aggressive and more backward and regressive than Christianity in Europe or the USA. It seems that they are trying to counter their losses in the West with new converts in India. David Frawley (June 11, 2019-Twitted).

Frawley further said, “As long as Christians unleash their missionary warriors against Hindus, Hindus must counter them and expose their wrong beliefs. Christians cannot talk about religious harmony and respect while setting their missionary armies upon the world. Their mentality is not one of honouring the Divine in all, but of promoting a well-funded and determined conversion agenda for one point of view only.”

Concerned about the menace of conversion, the breakup of families, moral decay in the community, rampant deceptive practices of the Missionaries, Mahatma Gandhi stated in 1935 that “If I had power and could legislate, the first thing I would ban is conversions.”

He further stated that “When the missionary of another religion goes to them, he goes like a vendor of goods. He has no particular spiritual merit that will distinguish him from those to whom he goes. He does, however, possess material goods which he promises to those who will come to his fold.” (Harijan: April 3, 1937).

We request you to work toward the passage of the Anti-conversion Bill at the Central government level and the imposition of severe punitive laws for violating the Law.

HDPP under the aegis of TTD should realize that the Christian missionaries are converting Hindus into Christianity using various deceptive methods on a war footing in and around the Tirupathi area. A number of illegal Churches have come up at the foothills of Tirumala. Extensive conversion is happening in various institutions, hospitals, and on Tirumala itself.

GHHF suggests that HDPP should train at least 1000 Dharma Pracharaks by equipping them with adequate knowledge about Hinduism, nature, and deception of Christianity, Christian hatred toward Hindu Gods, Christian condemnation of Hindus to eternal fire, and brutality in the Bible. Enough literature should be prepared to contrast Hinduism and Christianity which would enable the Dharma Pracharaks to present the information intelligently, to counter the false narrative of Hinduism by Christians and expose their deception, lying, brutality, and atrocities.

It is TTD’s dharma to address these issues by appointing an adequate number of Dharma Pracharaks to the villages where they can contrast the two religions and invite all of them back to their original faith. For various reasons, they have taken the wrong route. It is the responsibility of TTD to bring them home. Initiate Ghar Waapasi immediately and stop the erosion of the Hindu population and welcome them back on track of the dharmic path.

Global Hindu Heritage Foundation would be happy to help in this noble cause, if necessary, to welcome Hindus back into Dharmic path.

GHHF would appreciate your discussion at the TTD Trust Board meeting on August 28. We request you to respond to our letter about the course of action being taken to preserve the sacredness of Lord Venkateswara.

Also, we request you to work toward the passage of the Anti-conversion Bill at the Central government level and the imposition of severe punitive laws for violating the Law. India’s Hindu richness is amply documented and appreciated by countless scholars. Annie Besant says, “Hinduism is the soul of India. Without Hinduism, there can be no India. Without Hinduism, India has no future. Hinduism is the soil into which India’s roots are stuck and if torn she will inevitably wither as a tree torn out of from its roots. Who shall save Hinduism, if not Hindus? If India’s own children do not cling to her faith, who shall guard it? Hindus alone can save India, India and Hinduism are one.”[7]

As Hindus appointed to the Trust Board, you have the responsibility to save Hinduism, protect Hindu Dharma, practice Hindu customs, uphold the Hindu way of life and root out adharmic tactics encircling all Hindu Temples in India. You are all Hindus. You have an adequate Budget to propagate Hindu Dharma and encounter deceptive practices of other religions. It is time to look inside, search your soul, implore your heart, and awaken your conscience, it is time to think as a Hindu without any external pressures with no regards for name, fame, wealth, and power.

May Lord Venkateswara bless you all with enough courage, pride, fearlessness, strength and confidence to protect Hindu dharma to enrich the human life for the sake of Loka Kalyanam (human welfare).

Note:
1. Text in Blue points to additional data on the topic.
2. The views expressed here are those of the author and do not necessarily represent or reflect the views of PGurus

The previous part of the article can be accessed below link:

[GHHF] Attend Gauraksha Puja by Swami Paripoornananda by December 10th at 7:30am