GHHF invites you on Dec 6th 2009 at Sri Venkateswara Temple, 780 Old Farm Rd, Bridgewater, NJ 08807, to a fund raiser and the grand cultural programs. The 3rd Pada-Yatra by Kamal Kumar Swami is currently in progress. We need your support to continue our efforts to bring awareness to save temples in India.  (Click for 12/06/2009 flyer in Color PDF ) 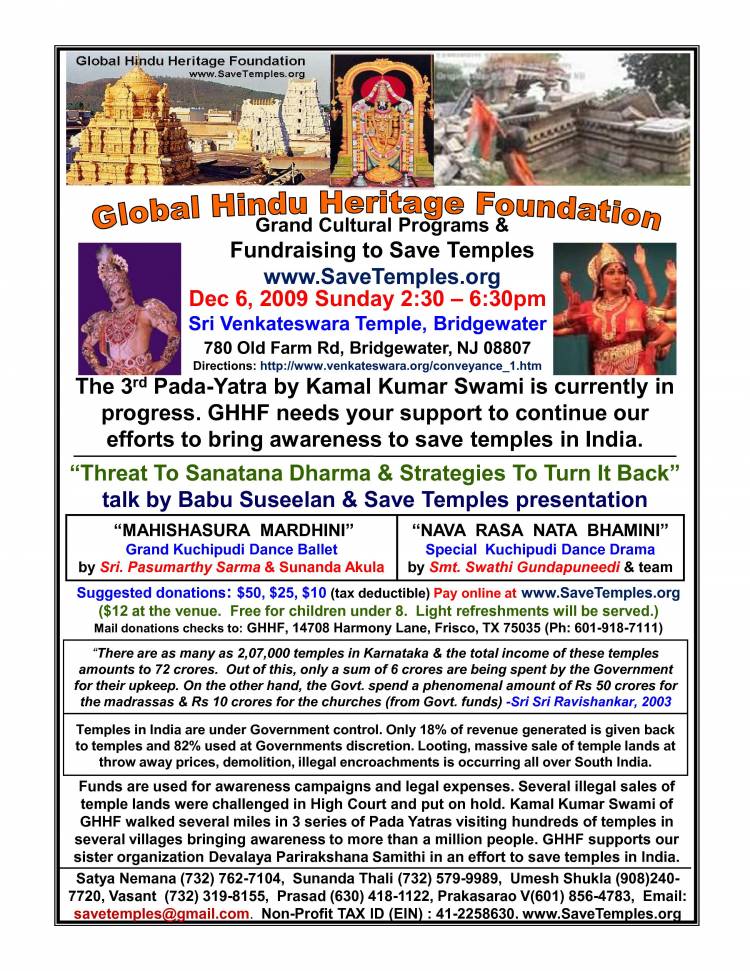 “There are as many as 2,07,000 temples in Karnataka & the total income of these temples amounts to 72 crores. Out of this, only a sum of 6 crores are being spent by the Government for their upkeep. On the other hand, the Govt. spend a phenomenal amount of Rs 50 crores for madrassas & Rs 10 crores for churches (from the Govt. Funds)"   - Sri Sri Ravi Shankar, India Today in 2003

Temples in India are under Government control. Only 18% of revenue generated is given back to temples and 82% used at Governments discretion. Looting, massive sale of temple lands at throw away prices, demolition, illegal encroachments is occurring all over South India.

GHHF supports our sister organization Devalaya Parirakshana Samithi in an effort to save temples in India.  Funds are used for awareness campaigns and for planned programs such as 'Maa Develayam (Our Temple),  Adarsha Devalayam (Model Temple),  Adopt a temple,  Model Management structure for Temples,  challenge abuse in Government bodies. Several illegal sales of temple lands were challenged in High Court and put on hold. Kamal Kumar Swami of GHHF walked several miles in 3 series of Pada Yatras visiting temples in hundreds of villages bringing awareness to more than a million people. Literally hundreds of news paper articles were written of his work and Padayatra that raised enormous awareness to temples in Andhra Pradesh that forced the Government to pay attention to the issues.  There are many challenges ahead from curbing the run away Government departments abuse,  public apathy and temples becoming dilapidated at alarming rate etc that needs to be addressed.