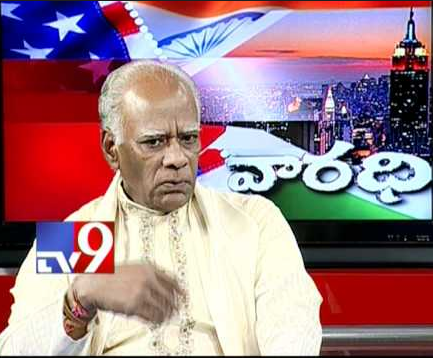 Dr. Prakasa Rao has been the key personality behind GHHF. He has a great understanding of Hindu Religion, Hindu Dharma and has studied numerous religious texts at length. He has authored over 350 articles published on www.savetemples.org and has refuted and debated controversial topics on Hindus and Hinduism in the media in order to preserve and protect our Hindu heritage.

Details of the program:

Interested readers may find the biography of Dr. V. V. Prakasa Rao below:

Dr. Prakasa Rao attended Hindu College and National College in Machilipatnam, and received his MA degree in Rural Development and Economics at Andhra University in 1963. Then he worked at Center for the Study of Developing Societies in New Delhi 1964-65.

He authored and /or coauthored about 70 articles in the areas of marriage and family, aging, Hinduism, criminology, sociology of sports and other areas in professional journals. He organized numerous sessions on Reincarnation, Karma, South Asian Studies, Comparative religions, Spirituality and religion at professional meetings. He coauthored books with his wife Nandini Rao, “Marriage, Family and Women in India”, “Wonders of a Holy Master I”, “Wonders of a Holy Master Volume II”, “Wonders of a Holy Master Volume III”, “God Word Volume II”, and “God Word Volume III”. He has also presented numerous papers at various organizations: Hindu Mandir Executive Conference, WAVES, Hindu Empowerment Conference, World Religious Conference, and many professional organizations.

TANA: He actively participated in TANA from 1979-1995; served in a number of committees, helped conduct Youth Camp in St. Louis, and conducted survey on identity of youth. He brought Dr. Medasani Mohan for the first time in 1989, and then in 1991 to TANA; and arranged his tour in different cities in USA. He also invited and arranged Sri Veturi’s program in Houston and other cities in 2000. He also served as the co-chair of Spiritual Committee of TANA from 2009 to 2011.

HTSM: He was one of the Founding members of Hindu Temple Society of Mississippi and served as its President from 1986 to 1991. During this period, 7000 square feet Hindu Temple was built and consecrated in 1990 with Lord Venkateswara as the Moolamurthi along with 16 other deities. In 2005, a New Hindu Temple was started. Construction was completed with the performance of Pranaprathishta and Kumbabhishekam ceremonies in May 2010.

DYC: In 1990, he had the honor of meeting Sri Ganapathy Sachchidananda Swamiji of Avadhoota Datta Peetham which lead to the beginning of his spiritual journey. In 1993, he was appointed as Chairman of Datta Yoga Center, USA, responsible for coordinating all the activities of Datta Temple and Hall of Trinity, Baton Rouge, LA; Datta Retreat Center in Pennsylvania, and 24 Satsang groups in USA. He also serves as Advisor to Datta Yoga Centre in Toronto, Canada. He continues to serve in this role today.

With Sri Swamiji’s blessings, he moved to Frisco, TX in May 2009 to help coordinate the planning and Construction of KaryaSidhi Hanuman Temple on a ten acre lot with a budget of 5-6 million dollars. Four feet Marakata (Emerald) Hanuman is being carved to be installed in the Temple.

GHHF: Global Hindu Heritage Foundation was started in 2006 by a group of highly professional people in USA with the sole objective of freeing the Hindu Temples from the government control by challenging the Endowment Act in the court of law. Serving as President of GHHF since its inception, he is also involved in Hindu Devalaya Parirakshana Samiti which was established in December 2006 by GHHF to help protect the Temple lands and revenues across Andhra Pradesh by taking necessary peaceful methods. He has been instrumental in MahaPadaYatra to raise the awareness of people, help coordinate Pubic Forums in Tirupathi in 2008 and 2009.