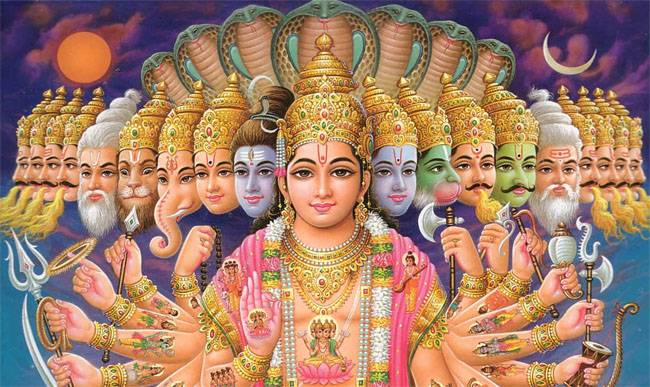 "So far as I am able to judge, nothing has been left undone, either by man or nature, to make India the most extraordinary country that the sun visits on his rounds. Nothing seems to have been forgotten, nothing overlooked … Land of religions, cradle of human race, birthplace of human speech, grandmother of legend, great grandmother of tradition. The land that all men desire to see and having seen once even by a glimpse, would not give that glimpse for the shows of the rest of the globe combined." Mark TwainProfessor Ivette Vargas-O'Bryan, an Associate Professor of Religious Studies at Austin College, Sherman Texas, received two Masters Degrees and a PhD from Harvard University. She has been teaching for more than 10 years. She visited India, and Nepal several times and learned Sanskrit. Over the last two years, she brought her students every semester to experience Karya Siddhi Hanuman Temple and listen to hear the uniqueness and salient features of Hinduism. Many of her students even attended Diwali function, Holi and Navaratri festival including Bathukamma program.

Realizing my 36 years of teaching Sociology and organizing various seminars on Hinduism and my involvement in Karya Siddhi Hanuman Temple, Frisco Texas and Global Hindu Heritage Foundation, in December 2016, Dr O’Bryan called us to find out if we can present few lectures on different dimension of Hinduism to expand the students’ knowledge about Hindu culture, art and symbolism. We developed the Course outlines for seven Courses to expose the students about the diversity of Hindu culture. She brought 16 students to Karya Siddhi Hanuman Temple, Frisco, Texas to know more about different dimensions of Hinduism. We had eight Power Point presentations – 1) Uniqueness of Hinduism, 2) The Mythology and Symbology of Gods and Goddesses, 3) Meaning and Significance of Puja, 4) History and Practical Demonstration of Classical Dances, 5) Nada Brahma’s impact on Health, and Crop and Milk Production, 6) The concept of Guru Tattva, and 7) Yoga and meditation: Theory and Practice. Each presentation was about 1:15 minutes.

Lecture on Uniqueness of Hinduism 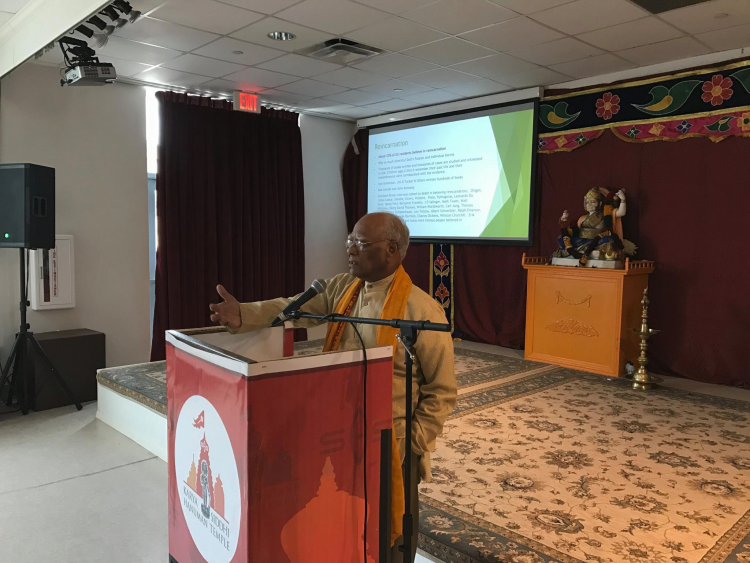 (NOTE: This presentation is a condensed version, highlighting the selected features of the topic. It is neither complete or exhaustive).

This presentation centered around the history of Sanatana Dharma, the origin of the word Hindu, definition of a Hindu as enunciated by the Supreme Court, the salient features of Hinduism, and the difference between Hinduism and the Abrahamic religions. Discussed about the scientific nature, multiplicity of Gods, importance of Image worship, freedom enjoyed by Hindus, inherent nature of Tolerance, innate belief in ahimsa, Karma theory, importance of reincarnation, Guru concept, and the philosophy of “live, let live.”

Hinduism is never afraid of science. Its contribution scientific contribution is unparalleled. Zero, infinity, value of phi, decimal system, gravity, anatomy, astronomy, mathematics, algebra, trigonometry, quantum Physics, heliocentric theory, calculus, metallurgy,  surgery, dentistry are few examples of the intellectual mind of Hindus. They believe the science in fact proves their theories.  For example, that Bhagavad Purana indicated that the earth is in existence for the last 8.64 billion years. How can we prove it? Based on their scientific study, Carl Sagan and many modern astrologist have concluded that not even one year difference between Bhagavad Purana assertion and the modern scientific research.

It is the hallmark of Hinduism. Respect for life because divinity is believed to permeate all living beings, animal, plants. Vegetarianism is advocated as an example of Ahimsa. Never advocated violence to conquer other countries to propagate their region. They never invaded any country for religious purpose. 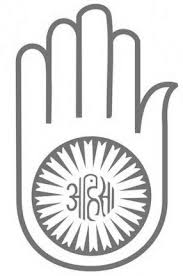 Former President Abdul Kalam said, “In 3000 years of our history, people from all over the world have come and invaded us, captured our lands conquered our minds. From Alexander onwards, The Greeks, the Portuguese, the British, the Mughals, the French, the Dutch, all of them came and looted us, took over what was ours. Yet we have not done this to any other nation. We have not conquered anyone. We have not grabbed their land, their culture, their history and tried to enforce our way of life on them. Why? Because we respect the freedom of others.”

As per Vedantic spirit “each man has been entirely free to search wherever he pleased for the spiritual explanation of the spectacle of the universe." – Romain Rolland (French Nobel Laureate)

Hindus do not proselytize. They respect the beliefs, practices, paths of other religions. While some religions do not have similar respect – devil worshippers, sinners, burn in hell, condemned to death. 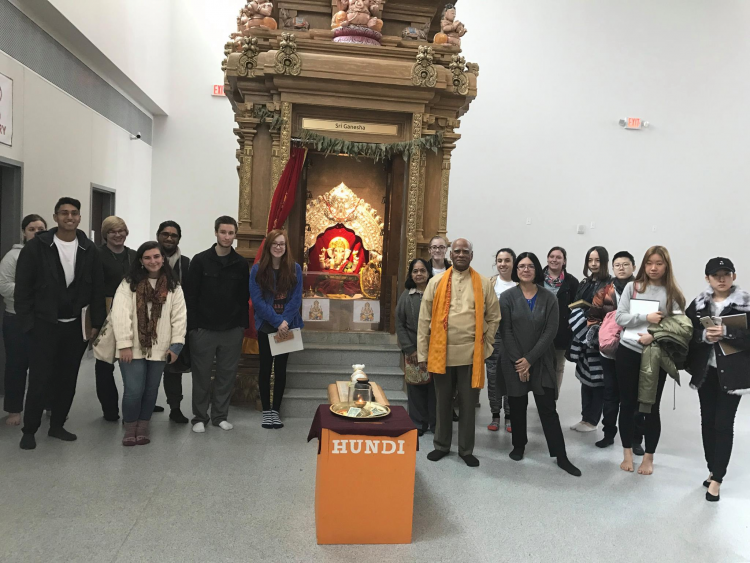 Goddesses. In a single family each one may believe in different manifestations promoting tolerance.

Many Jewish leaders recognized the tolerance of Jewish people who lived in India for more than 2000 years.  “India may be the only country in the world that has been free of anti-Semitic prejudice throughout its history.” Gary Weiss

Rabbi Metzger stated: “Jews have lived in India for over 2,000 years and have never been discriminated against. This is something unparalleled in human history." 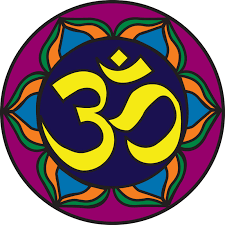 It is dharma that upholds supports, sustains the people, nature, and in fact the entire cosmos.  Dharma here means righteous behavior based on truth and capable of bringing good to the whole creation. Dharma is the foundation on which the entire universe stands. Every element in the universe has the obligation to perform its dharma/ duty such as galaxies, plants, animals, Navagrahas (nine planets), panchabhutas,

Sun does it, wind does it. Similarly, it is our obligation to do our dharma to sustain the humanity.

“Dharma” is that which upholds, nourishes or supports the stability of the society, maintains the social order and secures the general well-being and progress of mankind” Supreme Court

To speak the truth and to keep up promises is the key note of dharma.  “Dharmo  rakshati rakshitah”- If you protect dharma , dharma will protect you is the ultimate principle Hindus embrace. Similarly, Hindus believe in "Yato Dharmah Tato Jayah" - Where Dharma exists victory is guaranteed.

It is most difficult to define Dharma. Dharma has been explained to be that which helps the upliftment of living beings. Therefore, that which ensures the welfare of living beings is surely Dharma. The learned rishis have declared that which sustains is Dharma.  (Shanti Parva 109-9-11.)

Monotheism VS Polytheism – One God vs More Gods. 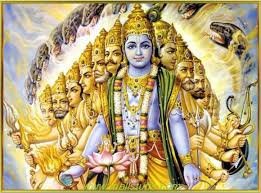 Hindus believe in multiplicity of Gods. 330 million gods. Sun has billions of rays. So the God can manifest in any number of manifestations. God is omnipresent (all pervading), omnipotent (all powerful), and omniscient (all knowing).  If that is the case, He can take any shape and form to meet the need of the disciples/ Worshippers.

Theistic Hinduism encompasses both monotheistic and polytheistic tendencies and variations on or mixes of both structures. They believe in a single divine essence, known as Brahman. Some believe in different deities emanating from Brahman, while others practice more traditional polytheism and henotheism, focusing their worship on one or more personal deities, while granting the existence of others.

Why Murthy/Idol Worship? Signs and symbols are essential for human living. It allows you to remember and act accordingly.

As per Hindu point of view that life does not end with Death. Soul passes from one life to another in this cycle of birth, death and rebirth (samsara). The soul comes back to earth in some form upon the death of body. Soul is eternal. 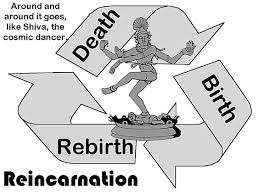 About 25% of US residents believe in reincarnation. Reincarnation is part of all religions. Somehow other religions have plucked passages from their scriptures while others deny and misinterpret. One’s actions will determine his position in the next life. Nobody can escape their actions. They follow them the way a child follows his mother.

The soul or spirit, after biological death, can begin a new life in a new body. This doctrine is a central tenet of the Hindu religion.

Thousands of books were written and thousands of cases are studied and witnessed in USA and around the globe. Children ages 2 thru 6 remember their past life and their remembrances were corroborated with the evidence.

Few questions were asked about the evidence to prove reincarnation cases. I have listed several cases cited in the books published by Ivan Stevenson, Jim B. Tucker, Carol Bowman, Brian Weiss, Elizabeth Claire Prophet, Tom Shroder and many more. I gave an example of James Leininger, 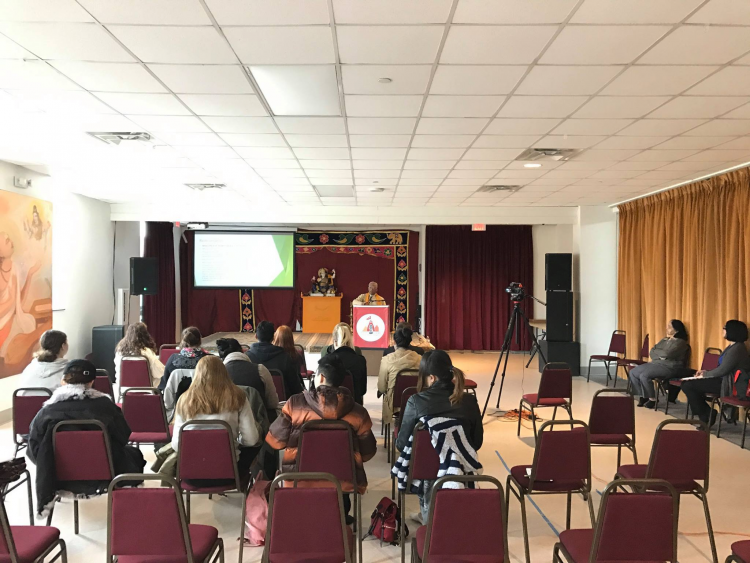 whose parents used to live in Dallas, who used to play only with planes and slowly started having nightmares and used to shout, "Airplane crash on fire, little man can't get out." He used to give extraordinary details of the plane, Corsair, he flew during the second world war in Japan.  One day he even showed a picture where he died in his previous life and talked about Natoma Bay ship, the number of people in his platoon, how many died and where his plane was hit by anti-aircraft fire. Parents being conservative did not believe in reincarnation.  Finally, his father went to Washington to find out the names of the dead people little James mentioned and confirmed his son’s previous life’s story. His son was James Houston in his previous life and all his accounts were even corroborated by two people who survived the attack during second World War.

Another question was whether somebody can be born in a different race, sex or different region. I gave an example of a white five-year boy, Luke Ruehlman, who lives in Cincinnati, talked about his previous life as a black woman who died when she jumped from a tall building that was caught on fire. She lived in a big city and used to take train to go to work. Puzzled and perplexed, mother did some research and found out through Internet that there was a blaze at Chicago’s Paxton Hotel that claimed 19 lives in 1993. One of the victim was a black woman named Pamela Robinson. He was also able to pick up Pam’s picture that was mixed with few other pictures of black women, proving the needed evidence that he was Pam in his previous life.

Second lecture on “Mythology and Symbology of Hindu Gods and Goddesses” will be published in few days.