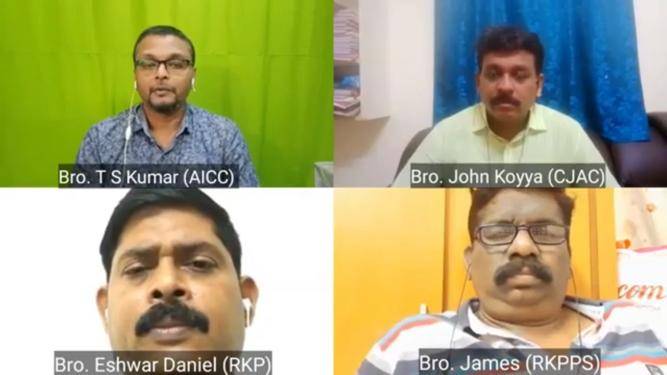 Missionaries come with crucifix in one hand and dagger in the other, to cut your throats or force you to accept their customs and opinions' -Denis Diderot (French philosopher, and chief editor of the L'Encyclopedie)

As many of you are aware that Global Hindu Heritage Foundation initiated the GHAR WAPSI program in Vishakhapatnam area to welcome those Christians who went on a wrong pathway for a number of different reasons. Admission in the educational institutions, different types of allurement, alleged job opportunities, alleged cure of diseases, fear of Satan pounding them if they are not converted, discrimination by Hindus, deceptive Christian tricks on the most illiterate people, Miracle boxes, easy loans to woo the Hindus, the promise of houses and other methods are used by Christian missionaries to convert Hindus to Christianity.

When GHHF announced the plans to welcome converted Christians back to Hinduism, Christian leaders organized a discussion about Ghar Wapsi. The Christians who participated in the discussion are:

The discussion is in the Telugu language. I will try to summarize their discussion and their concerns about Ghar Wapsi and my RESPONSE to their either concerns or criticism of our program. I will only highlight some of their statements for the sake of Non-Telugu speaking friends.

1)     Bro. T S Kumar anchored the program, made some comments, and asked for the other Christian leaders’ comments and concerns.      He said that the Global Hindu Heritage Foundation has announced publicly that they are going to convert about 100 Christians back to Hinduism. There appears to be a despicable plan behind this effort that should be addressed by Christians. He asked each of the other Christian leaders to express their opinion on the initiation.

2)     Bro. Eshwar Daniel said he heard of GHHF. He said Vishakhapatnam is a very peaceful place, there is religious harmony, and in fact, there is a proposal to move the capital to Vishakhapatnam He said GHHF's intention is only to create disharmony and religious enmity. Article 25 allows people to practice their religion. They only want to hurt the feelings of Christians. There is no guaranty that the people converting to Hinduism are really Christians.

3)     Bro. James says the foreign GHHF organization with the support of white people coming to my Bharata Desam and trying to convert forcefully. They are doing by bringing money from a foreign country. There is Kutra (secret/vile) plan. They are providing neither meals nor medicine. Their activity is neither Adhyatmika nor social activity. They are forcing people to convert. They are not doing as per law. These are Saffron wearing Hindus converting. They are getting more money from foreign countries than any other religion.

There will be few people who leave. These are the who come to church and sleep. If it OK if they leave.

4)     Bro. John Koyya . They are more interested in creating fear among Christians. There is already a talk that there are more Christians in Vishakhapatnam. He is doubtful whether they are really converting Christian because here Christians have strong faith. He Says Bible mentions husk and grain. It is OK if the husk / Waste goes away.

We tried to list the main points of the discussion. No attempt is made to translate their opinions word to word.

Please watch the full video which is in TELUGU.

On 13 the evening one gentleman with the mask in plain white clothes came to Sri Saidatta’s residence and wanted to know about Ghar Wapsi.

He did not mention his name and said he came from the Police Department and wanted to find about the program. Sri Saidatta asked him to remove the mask so that he can see his face. He refused. Then he wanted him to show his Police Department ID. He did not show it. In fact,  this alleged police officer asked Swamiji to show his ID. He gave him left and right shouting at him by saying you came to my house how dare you ask my ID. You came uninvited did not come in Police uniform and what is the purpose of your visit. You did not even call or inform us, but you showed up announced and do not want to show you ID.

Sri Saidatta started videotaping and the alleged Police officer did not want him to do it.  Sri Sai Datta mentioned that some people came before also and wanted to make sure about his own security by videotaping. Then that gentleman went away without revealing his name and without showing his ID.

As we can see some Christian organizations wanted to monitor our activities. Sri Saidatta wrote a letter to the Police Department about this gentleman by attaching his picture and asking for protection.

Sir, in recent times, some thugs attacked my goshalas in Pendurti Gandhi Nagar, tried to demolish my goshalas and attempted to take away the open land next to Goshala, and subjected us to fear by threatening my family.

Today, the person in this video introduces himself belonging to the police department and tells me something that is not relevant to me. He said that he was sent by  DSP Venkata Rao to intimidate us and would not answer any question I wanted to know about him. I asked him to show his Police ID and he failed to show.

This way, many people are coming and trying to create fear and anxiety.  We are often frightened by people like this. Hence, we request the Vishakhapatnam Police Department to provide us much needed security for our lives. someone who is in fear of the police commissioner of Visakhapatnam.

GHHF will update the progress of the vents, any response from the Police Department, and our future activities.

As you may have noticed that it would need some help from all our Hindus to continue our activities, to ensure the security of Sri Saidatta and other organizers. Your Donations are appreciated.

PayPal Method: To donate visit our website: www.Savetemples.org . Click on the Donate button, then press the Purpose category, and select the Ghar Wapsi category.

By Check: Or you can send a check payable to:

Vakulamata Temple Groundbreaking on March 5, 2017 near Tirupati. Swami Paripoornananda and Sri Ghazal Srinivas to take the to Complete the Temple.