Through the efforts of Swami Paripoornananda Swami and Dr. Ghazal Srinivas, Sri R V V Krishna Rao of Chittur District went to High Court regarding the neglect of Vakulamata Temple and requesting the HC to direct the government (TTD) to build Vakulamata Temple. Justice L. Narasimha Reddy made a startling, appropriate and proper decision by demanding the government to construct Vakulamata Temple immediately. He admonished the government for failing to even counter the Stay order brought by local who were doing illegal mining, demanded that Vakula Mata Temple be protected, and stop the illegal mining. High Court Lawyer, Sri K. Srinivasa Murthy ( some of you may remember, he was the one who helped me to get stay order for GO 29 in 2006 - the beginning of our movement through GHHF) argued the case saying that it is sacred to all Hindus, and it is unfortunate to neglect the mother of Lord Venkateswara. Unless the illegal mining is stopped the existing dilapidated Vakulamata Temple will collapse, the Lawyer argued.

Following the verdict by High Court, TTD Chairman Sri Bapi Raju is going to have a Urgent Meeting within the next 24 hours and make a decision and inform the High Court in few days.

We are all indebted to Swami Paripoornananda, Ghazal Srinivas,and the team for their dedicated, passionate and continued efforts to keep the flame burning. 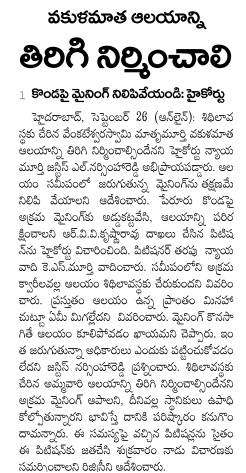 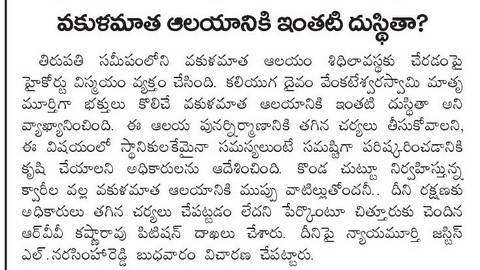