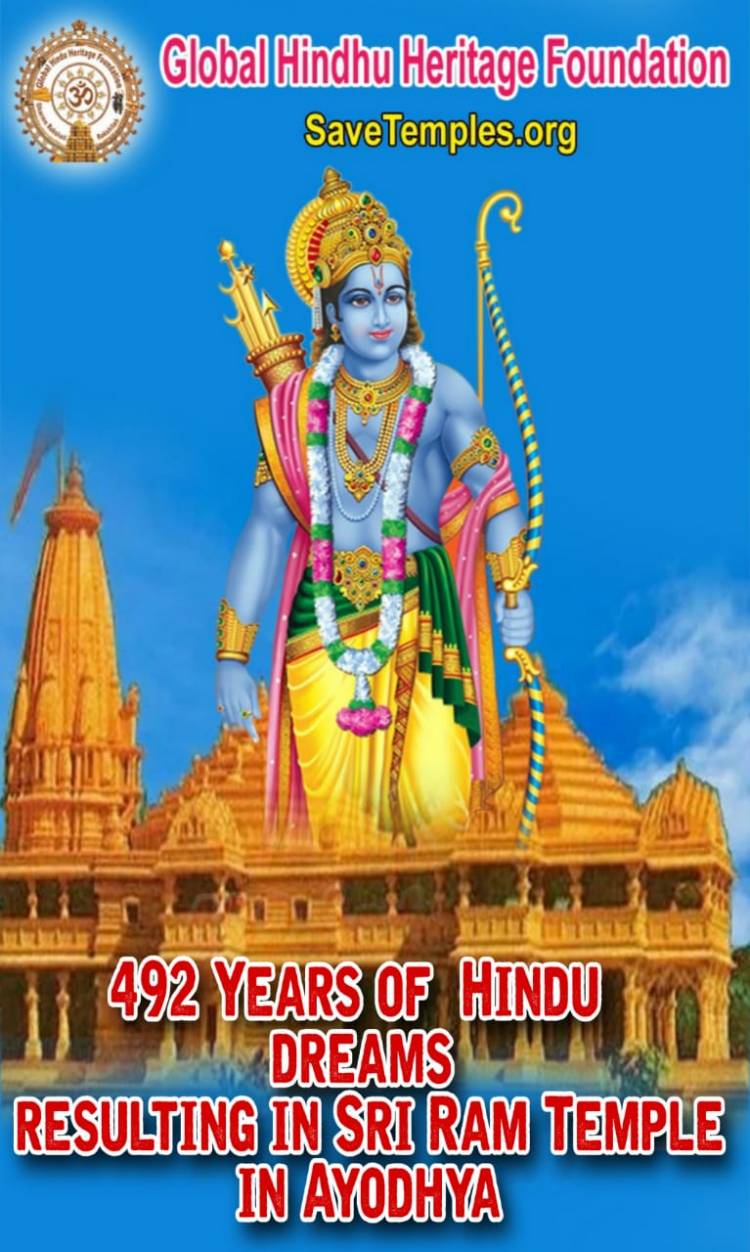 Global Hindu Heritage Foundation is incredibly happy, jubilant, and excited to send best wishes on the festive occasion the groundbreaking ceremony of Sri Rama Temple in Ayodhya after many years of litigation. We are eagerly and anxiously waiting to witness once in a lifetime event. We congratulate all the organizers of the Groundbreaking ceremony for the construction of  Bhagawan Ram on August 5. GHHF has been following the developments for the last 15 years, written articles, conducted seminars, and organized lectures to awaken the Hindus about the history of Rama Temple since 1100 AD. The arrangements for the Bhoomi Puja are being done on a grand scale to make all Hindus proud of their heritage. It is also the right time to talk about the history of Sri Rama Temple to our future generations to make them feel proud of their rich culture.

It is also, the right time to remember the history of Sri Rama Temple and commit ourselves that we will not repeat the same mistake allowing other religions to destroy our Temples, deface our Gods and demean our Hindu Dharma. Muslims have committed to destroying the most sacred places to Hindus ever since then entered India: and destroyed Rama Temple, Kasi Viswanath Temple,  and Krishna Janmasthala.  They concentrated on the destruction of Hindu sacred places only to deny Hindus to worship their loving Gods and Goddesses. Hindus should learn from Sri Rama Temple experience that the Muslims are interested in making India an Islamic Country and they do not hide their agenda. It is Hindus who are hiding behind Secularism for their political future, power, fame, and name. It is the responsibility of all Hindus to make sure the Politicians will not sacrifice Hindu dharma for the sake of other religions.

It is unfortunate that it took 73 years after Independence to decide by Supreme Court. Archeological Society of India produced undeniable evidence that there was a Temple underneath the Babri Masjid. Still many Muslims have criticized the decision and continue their opposition with the help of some of these secularists and Hindu politicians. If the Hindu population is not awakened to the possible demise of Hindu Dharma, these selfish Hindu leaders will sink the Hindu boat. What happened to the uniqueness of Hindu morals, ethics, character, dharma, satya, and pride? Do any of the political leaders display any of the virtues of Sanatana Dharma? Do they think that their selfish interest is worth more than the preservation and protection of the Hindus.?

Sri Rama is considered as Maryada Purusha, He is an embodiment of dharma. Raja dharma is more important than his personal dharma. He worked only for the welfare of the people.  He is known as invincible, simple, straightforward, courage, brave, truthful, virtuous, spoke the truth, adhered to dharma, balanced and judicious.

The history teaches us that we will lose our freedom if we are not united to protect Hindu Dharma which allows all faiths to coexist. The other two religions would never agree to respect Hinduism and would not like to coexist as humans. But one should be cognizant of the real nature of Islam which established in more than 50 countries only by SWORD.

This is the golden opportunity for all Hindus to reflect on the future of Hindu Dharma and rally behind the construction of the most sacred Rama Temple to be completed at the earliest possible time to perform Kumbabhishekam. Let us commit ourselves to protect and preserve our Hindu Temples and Hindu Dharma as we celebrate the groundbreaking ceremony of Bhagavan Rama Temple.

Once again, all members of Global Hindu Heritage Foundation across the world send their best wishes on the occasion of Bhumi Puja for the construction Bhagawan Rama Temple in Ayodhya.

Good news! US Postal Service will honor Diwali with a STAMP