“Cow protection is the gift of Hinduism to the world. And Hinduism will live so long as there are Hindus to protect the cow.” Mahatma Gandhi

Few days back, Global Hindu Heritage Foundation received this three part series videos produced by a Kannada TV Channel on the atrocious, brutal and appalling killings of loads and loads of cows. It is shocking, alarming, and outrageous. It is hard to watch. I am not sure how many people can watch all three of these videos.  You wonder as to what kind of country Bharath is? Is this the sacred land that respects, worships, adores and loves? Do we call ourselves Hindus, if we keep turning our heads away from the ghastly cow slaughter Mafia are relentlessly inflicting most heinous, inhuman, merciless, cruel killings on COWS?  Do we call ourselves Hindus if we cannot or do not voice our outrage, anger and outrage at this grim and gruesome killings. How can we remain silent listening to the cries of Mother Cow? She is the only animal, which gives everything to sustain the whole humanity.  Panchagavyas (all five elements – milk, butter, ghee, urine and cow dung) provide health, wealth and brain power. It is divine. All Gods reside in different parts of Cow. 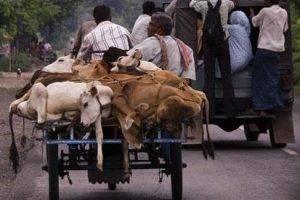 We request all our friends in BJP and the government officials to be aware of the extent of cruelty that is drenching the Bharath, the land that is always known for ahimsa, tolerance, and compassion for all living creatures. Every Hindu should be briefed or shown these VIDEOS at the earliest. The suffering of Gaumata will not be either auspicious or acceptable in the ONLY LAND that considers COW as MOTHER.

Transportation of Cows to Slaughter houses

Transportation of cows in the vans and trucks is a horrifying experience to the cows.   It is abominable, inhuman and grueling for the cows. They are being abused, injured and maltreated during the transportation. The mafia defy any kind of rules or guidelines to transport the cows.  They make cows stand in the trucks to accommodate as many as possible. They apply red and green chilies into the eyes to prevent them to rest and lie down. They are not either fed or allowed to drink in the journey that may take up to a week or so. 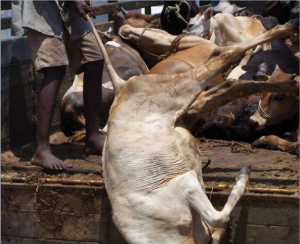 Since Independence, the fate of the cows has deteriorated to the extent that the government run by Congress Party publicly denigrated the Hindu scriptures and to appease a certain sections of Muslims for the Vote bank politics, started allowing the construction of slaughter houses, the slowly subsidized the construction these slaughter houses and failed to take action against the illegal construction of these abattoir. The government has made the country, which respects, honors and worships, the top exporter of beef in the world, sidelining Brazil as the second largest beef exporter.  To make India the top exporter, the Congress government has given as much as 40 percent subsidy to the to the beef exporters. In order to please the secularist, communists, Muslims, Christians and greedy business people like Kapil Sibal, the Congress government failed to take appropriate action to enforce the Article 48 of the Indian Constitution.

Gandhi Snubbed: The Congress government, which considers the Mahatma Gandhi as their role model and mentor and also follows him as a true believer of Indian legacy, has even refuted and detested his own philosophy and negated his own views on cow. Gandhi venerated and worshipped cow. According to him “The central fact of Hinduism is cow protection.” He even called cow as “the mother to millions of Indian mankind.” Let us remember that Gandhi said the cow in the mother of Indian mankind not just Hindu mankind. But the Congress party totally ignored him on many of his view and took advantage the rural masses love and affection toward Gandhi and exploited their weakness for political purpose.

Gandhi said, “Mother Cow is in many ways better than the mother who gave us birth. Our mother gives us milk for a couple of years and then expects us to serve her when we grow up. Mother cow expects from us nothing but grass and grain. Our mother often falls ill and expects service from us. Mother cow rarely falls ill. Here is an unbroken record of service which does not end with her death. Our mother, when she dies, means expenses of burial or cremation. Mother cow is as useful dead as when she is alive. We can make use of every part of her body-her flesh, her bones, her intestines, her horns and her skin. Well, I say this not to disparage the mother who gives us birth, but in order to show you the substantial reasons for my worshipping the cow. (H, 15-9-1940, p. 281)

Hindu Scriptures Desecrated: Hinduism is the dominant dharma or way of life. It is called Sanatana dharma meaning the duties of human being, irrespective of religion, such as honesty, tolerance, purity, truth, self-restraint, ahimsa, peace, self-realization, and live let live. This kind of philosophy is exemplified by the views expressed by M C Chagla, former Union Education Minister, "I am a Muslim by religion; but by culture and race I am a Hindu. All Muslims of this country are Hindus."

Why would Gandhiji and Chagla would they call themselves as Hindus? Would they embrace Hinduism if it epitomizes hatred toward other religions, and exemplify the sectarian ideology?   They believed in Hinduism because it never advocated the building of boundaries around the narrow sectarian thinking and never claim its supremacy over other religions. 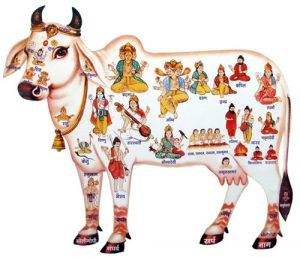 Many Hindu scriptures extolled the virtues of cow, considered her as sacred and worship her as Gomati. She is considered the fulfiller of all desires. She should not be considered as a mere giver of milk. Her welfare is tantamount to the welfare, protection and happiness of the nation. Let us give few examples of the treatment of in Hindu scriptures. The Congress government did everything possible to denigrate the Hindu scriptures, hurt the feelings of Hindus, and insult the Hindus.

Not only the Vedas are against animal slaughter but also vehemently oppose and prohibit cow slaughter. Yajurveda forbids killing of cows, for they provide energizing food for human beings.

She is like the mother of the cosmic Forces, the daughter of the cosmic Matter, the sister of cosmic Energy, the centre of the ambrosia. I address to men of wisdom --kill not her, the sinless inviolate cow.

May cows come and bring us good fortune; let them stay in our cowsheds and be content in our company. May many colored cows bring here prolific milk for offerings to the resplendent Lord at many dawns?

Let not the cows fall a victim to the arrogant, dust spurning war-horse. Let them not fall into the hands of a butcher or his shop. Let the cattle of the man, the householder, move about freely and graze without fear.

The entire 28th Sukta or Hymn of 6th Mandal of Rigveda sings the glory of cow.

In Ayurveda the importance of cow and her products are described in great detail.  It is said: Cow urine Panchagavyas is great elixir, proper diet, pleasing to heart, giver of mental and physical strength, enhances longevity. It balances bile, mucous and airs. Remover of heart diseases and effect of poison.

Padma Purana says: “Cows are the abode of the Goddess of wealth. Sins don’t touch them. There exists a fine relationship between man and cow. A home without a cow is like one without dear ones.” 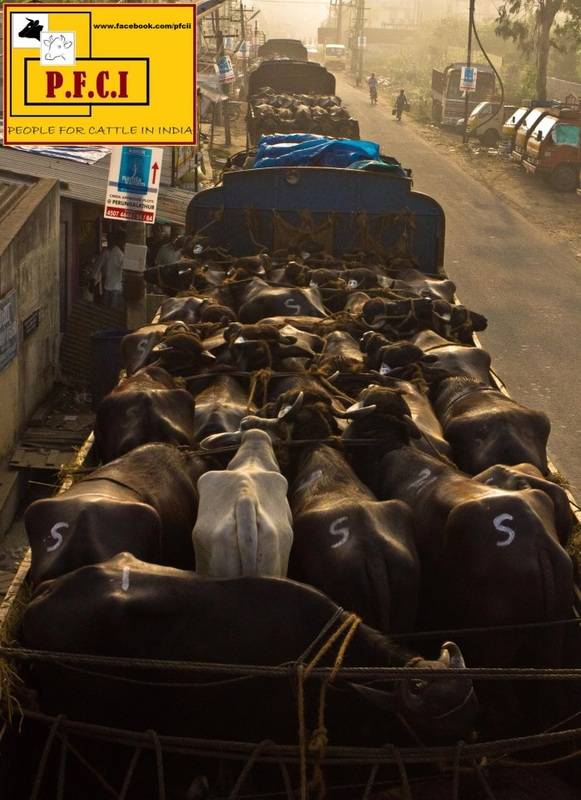 In March 2014, the Muslim Gaurakshak Sammelan under the auspices of Muslim Rashtriya Manch (MRM) demanded that Cow be declared “National Animal” and commanded complete ban on the slaughter of cows for the betterment of people and environment.  The MRM passed a resolution to approach the United Nations urging them to direct their member nations to take steps to ban cow slaughter for the welfare of humanity. Cow is the mother of the universe, the resolution said. They also made the following resolutions:

Government constitute a Commission to look after cows and its progeny;

Demanded a complete ban on export of beef and closing all abattoirs in the country;

Prophet had ruled against eating beef as its caused diseases but at the same time encouraged  consumption of milk and ghee as they are health tonics.

At the holy Mecca, no cow is sacrificed in the past 1432 years. Therefore, the issue of cow slaughter is more of a political in nature and it should be looked from the point of view of human welfare, environment protection.

At the holy Mecca, no cow is sacrificed in the past 1432 years. Therefore, the issue of cow slaughter is more of a political in nature and it should be looked from the point of view of human welfare, environment protection.

Based on the scriptures about the sacredness of cow, the benefits of Panchagavyas, the scriptural description of the importance of cows for the betterment of humanity, scriptural sanction to ban the cow slaughter, MRM’s resolutions to protect the cow from the slaughter, and political manipulation to appease the certain sections of minorities, the present government should take appropriate actions to ban the cow slaughter forthwith.

Request to the Prime Minister 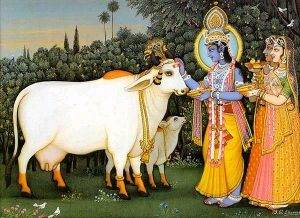 This is a rare opportunity to the Prime Minister to take immediate action and make Bharath the land of peace and prosperity that reveres Mother Cow and maintains high standards of decency, morality, humanity and dignity. Global Hindu Heritage Foundation (GHHF) submits the following recommendations to the Prime Minister for his consideration:

The State shall endeavour to organise agriculture and animal husbandry on modern and scientific lines and shall, in particular, take steps for preserving and improving the breeds, and prohibiting the slaughter, of cows and calves and other milch and draught cattle.  Make sure that the States implement this Directive Principle to spare the lives of cows. Stop the slaughter of the COWS.

The following there videos should open up our eyes to act immediately before more torture is inflicted on these gentle, docile and quiet cow. These three videos are produced in Kannada language. Language is no barrier. The visuals will speak in your language. No language can accurately describe the atrocious killings of such gentle, loving, ever giving and respectful animal, we Hindus call COW. When you see even few minutes of these videos, our hearts get throbbed, our emotions get aroused, our minds get numbed, our eyes shed tears and our feelings get murky.

Please watch all the three to grasp the thousand-headed greedy nature of the cow slaughter Mafia.

Mother as an Embodiment of Sacrifice and Protection

[GHHF] Is West Bengal Slipping away? Can Hindus stop Muslim Terrorism and infiltration; One Hindu’s Fight Continues; Help Fight for the survival of Hinduism