“The Christian god is a three headed monster; cruel, vengeful and capricious. If one wishes to know more of this raging, three headed beast-like god, one only needs to look at the caliber of people who say they serve him. They are always of two classes: fools and hypocrites.”  Thomas Jefferson, Third President of United States.

A video titled “Sudhir Mondithoka – Christian Conversions in Tirumala & Preying on Kids” is creating an uproar among Hindus due to the fact that the Conversion effort is being done openly on Seven Hills and demeaning the religion and even denouncing the most powerful Deity, Sri Venkateswara Swamy. Pastor Sudhir started his trip to Seven Hill starting from the entrance all the way through Ananda Nilayam and praying for the souls of all Hindus who are visiting the Lord Venkateswara Temple. He repeatedly urged his foreign Missionaries for financial support to carry out the gospel mission to save the LOST soul. 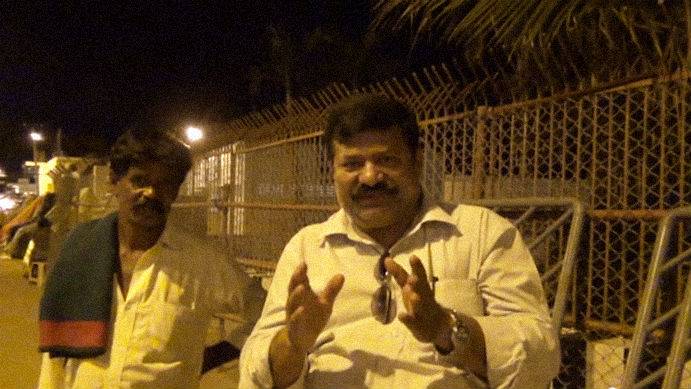 Christian missionaries are accusing Hinduism as false religion and trying to convert Hindus into Christianity. Not only they engage in conversions in the public schools and   colleges by luring the students to medical and engineering colleges, they have been engaging in proselytization and conversions activities near the Hindu Temples as well as on the premises of the Temples. Now the Christians are targeting the most sacred place for Hindus, Sri Venkateswara Swamy Temple, popularly known as Tirumala Tirupathi Devasthanam (TTD).

In 2007 AP government issued two ordinances; 1) prohibiting the proselytization on the TTD Hill and 2) Declaring TTD and about 20 other religious places as Divya Kshetrams.

Global Hindu Heritage Foundation (GHHF) was fortunate to witness these two ordinances issued in 2007. In fact Sri I V Subba Rao, IAS, the then Principle Secretary of Revenue Department, personally handed over these two ordinance to GHHF in a public program conducted on June 16, at Satyasai Nigamagamam Auditorium in Hyderabad.   Sri Subba Rao gave a very powerful speech to preserve our Hindu Temples and Hinduism and also mentioned that he was fully supportive of GHHF activities and it is the responsibility of every Hindu to be part of the preservation of our culture.

GHHF summarized the events on July 2, 2007 in our communication as follows:

During our visit to Hyderabad, two significant ordinances were issued by the government of Andhra Pradesh.:

1) The Government said the "Tirumala Divya Kshetram", the name of the holy place, shall comprise the seven hills of Seshadri, Garudadri, Venkatadri, Narayanadri, Vrishabhadri, Vrishadri and Anjanadri, right from the foothills, the holy theerthams and the main shrine. Roads and footpaths leading up to the temple, including the first and second ghat roads between Tirupati and Tirumala, and the motorable road from Tirumala to Papanasanam were declared part of the Kshetram.

2 Andhra Pradesh Government has finally issued an ordinance empowering the state to prohibit propagation of other religion in places of worship. *The Government with a view to maintain public order, tranquility and serenity of a place of worship or prayer, prohibits propagation of a religion other than the religion traditionally practiced at such places, by words, either spoken or written or signs or by visible representation or distribution of  any printed material or other forms of religious literature. *

The Conversion Video – A case for ARREST and PERSECUTION

Sudhir Mondithoka, Director, Immanuel Baptist Ministries of India, Hyderabad has produced this video on the Seven Hills to show to his American Missionaries who fund his lucrative  missionary activities.

VAN: He was driving Mahindra Van with license plate: AP16BM0568

In their Website, (http://fip1040.org/) Faith International Partners, an American based missionary outfit, exists to mobilize national Church-planting pastors in the 10/40 window and beyond to preach the gospel, plant churches, and disciple their own people.

There are four billion people in this area of the world, and virtually all of these 67 countries are either Buddhists, Communists, Hindus, or Islamic. They are 95% un-evangelized due to the vast majority of them forbidding western Christian missionaries to do long term work, yet we will still be held accountable at the Judgment Seat of Christ for His mandate to “...preach the gospel to every creature” (Mark 16:15).

Since the door is closed to western missionaries, we are going through “the window” of raising support for these indigenous men of God. As Saul from Tarsus, Celicia, partnered with the church of Antioch, Syria, we are creating partnerships between the church-planters of third-world countries in the 10/40 window and the churches and Christians of America.

His Foreign Missionaries frequently visit India to see the number of souls harvested with their eyes.

Soul vendors like Sudhir Mondithoka frequently send their project reports (how conversions are going) to foreign Missionaries to justify their funds and request for more foreign funds. This video is one example of the reports they send to the foreign missionaries.

In one of his earlier reports he sent to foreign missionaries, Sudhir talks about the Elephant God. It reads “In this video you can see how Hindus worship their Elephant shaped god in Hyderabad. They do not know the Living God and they are in darkness and under the bondage! Please pray that GOD would make Himself known to them as we preach the God of the Bible and teach about the Salvation Jesus Christ brought to Men by his own sacrifice on the cross of Calvary! My heart grieves about their lost condition.  Pray with me for their souls.”

* By showing a Hill at the entrance to TTD, he says that the Jesus Christ is the Rock himself, now the devil occupied this place. In the modern world, it is occupied and Venkateswara Temple was built. This area originally belongs to Jesus.  Devil has occupied this place.  Jesus Christ will reign supreme and one of these days they will be overthrown. It is his responsibility to take the Gospel bravely and get people saved. Here the word “saved” means accepting Jesus as the only true God and getting saved from the Hell.

* It is a tremendous opportunity as the God kept the doors wide open for us.

* Millions of people come to Tirumala Tirupathi to worship God. It is small “g” in God meaning to demean the Hindu God Lord Venkateswara.

* This Temple is located on Seven Hills, it is a beautiful place, a very popular place; but people are LOST.

* Many Christians are facing many difficulties here implying that many of them are employed on the Hill, they practice their faith here and distribute missionary literature even in the prohibited areas.

* Addressing his missionaries in USA, he says, “Since you give to us financially and you pry continually, God is making us profitable and save the souls.”

* Millions of people come here to pray the false idol. Our burden is to pray for them and come to the real God so that their lives will be meaningful.

* People come from all over the world to pray this God, small “g”.

* Those that come are becoming impoverished, because of untruth and because of darkness.

* He was asking Jesus to find out all the “lost sheep” and bring them to savior.

* He says police are keeping an eye on them but Jesus Christ cannot be hid or controlled, cannot be stopped. By pointing to the pilgrims he says that they are “lost souls.” The passion for the lost souls is such that we are able to pay any price to win battle to fight the devils.

* Pointing to the people going to have Darshan of Lord of the seven hills, he says our hearts are filled with much burden for these lost people. The glorious gospel of Jesus Christ needs to be proclaimed all over this world. He is asking his American Missionaries to pray for these souls.

* Pointing to the shoes left before entrance to the Temple, he says that they leave these shoes because they think it is a holy ground, but it is not. So help us to help them since they are lost.

* Pointing to the pilgrims, he says that they need salvation and they need to be saved.

* He identified one young man and introduced him as Tirupalu from Nellore District, prayed with him and shared with him the Gospel of Jesus Christ. He said that few minutes back he was so disappointed, now he is a happy man.

* People all over the world come here to Tirupathi to receive comfort and some sort of encouragement, but they do not receive it. So pray for these people. He is doing mighty work for the Lord. Now this man is saved. Now my heart is rejoicing and this is happening all over because of your encouragement.

* Then they leave Tirupathi and go to one of the schools where they prey on small children with American Missionaries. They distribute missionary literature and ask them to distribute to their friends. 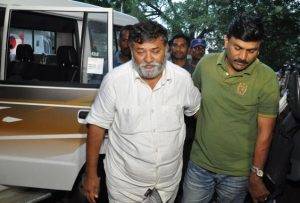 As I write this article, on October 30, it was announced that Pastor Sudhir, along with three others who are seen proselytizing Hindus to Christianity on Tirumala hills, have been taken into custody in Nellore today. Vigilance department has confirmed his attempt of converting Hindus after checking CCTV camera footage. He left for Tirumala at 5.15 PM on Sept 18 from Alipiri and reached the temple town at 6.15 PM with his 6 member group and later carried out preaching.   AP witnessed wide protests after the video of Pastor Sudhir proselytizing on Tirumala went viral on internet.

[GHHF] Relocation of all Hindu Temples affected by Polavaram Project