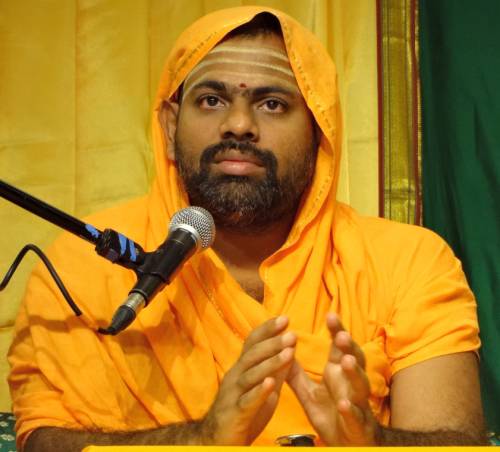 Sreepeetham - A luminouscentre of Wisdom, Worship and Service. It inspires a person to realize and follow Hindu Dharma and its Values. This is situated in serene atmosphere and divine ambience surrounded by thick greenery. It is established by Pujyasri Swami Paripoornananda Saraswathi in the year 1999 in Kakinada, East Godavari District, Andhra Pradesh.

Swami Paripoornananda Saraswathi a renowned Saint, Scholar and Visionary was born on 1st November 1972 in a traditional family. After his formal education, he joined a Vedic school to study Krishna Yajurveda. Not being satisfied with mere recitation of vedic hymns, he developed a keen interest to pursue the meaning of vedic philosophy in depth under the able guidance of Pujyasri Swami Dayananda Saraswathi a well renowned sage of India, hailing from the lineage of Sri Adi Shankaracharya.

Being inspired by the teachings of his Guru, Swami Paripoornananda Saraswathi realized the need for balancing the society by imparting knowledge and to render services, Pujyasri Swamiji established Sreepeetham as the hub of all spiritual and service activities.

Declares India as Hindu Rashtra; Hindus must get united to protect their freedom; Seminar Conducted in Tenali, AP on Feb 7, 2014.

Invites you to attend a Lecture by Sri Swami Paripoornananda Saraswathi - May 12 (Saturday) 6:00pm