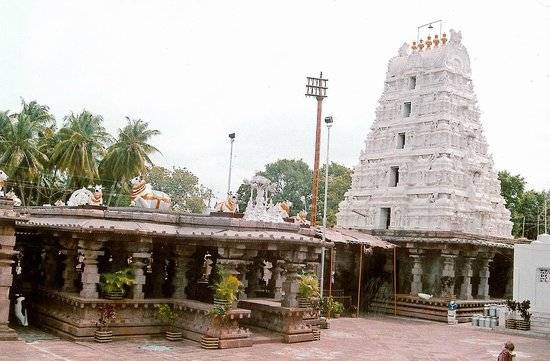 Srisailam Temple is the abode of Lord Mallikarjuna Swamy and Goddess Bhramaramba Devi. It is located on top of Nallamalai Hills, Srisailam, Kurnool District, Andhra Pradesh, India. In the Temple the presiding deities, Lord Mallikarjuna Swamy is one of 12 Jyothir Lingams and Goddess Bhramarambika Devi is one of 18 Maha Shakti Peethas. The most unique feature of the temple is that both Jyothir Lingam and Maha Shakti Peetas exist side by side in one location at this Kshetram (Temple).

Recently the Executive Officer, Sri Srirama Chandra Murthy, is embroiled in controversy as he was assigning the contracts to operate shops in the Temple complex to Muslims. He is believed to have taken bribes from the Muslims allowing them to auction the shops. For several years non-Hindus are allowed to auction to operate the shops and even were employed in the sacred Sri Sailam Temple. Several Hindu organizations such as BJP, Shiva Shakti and other organizations organized a protest demanding that non-Hindus should not be allowed to receive contracts for operating shops and even contracts for construction work. They are also demanding that non-Hindu employees should be removed from their jobs as per the GO. BJP leader Sri Budda Srikant Reddy along with other organizations such as Shiva-Shakti, representing Kalyan Kumar,  went to EO's office requesting him to deny non-Muslims participation in the auction of the shops.

Recently Lalithambika Commercial Complex was constructed near the Temple to provide more amenities to the devotees. It appears there are about 236 shops to be allocated to the people to operate the shops. About 30 of them were allotted to Chenchu tribesmen. Rest were to be auctioned where many Muslims applied to acquire space to operate shops. Realizing the confusion about the instances of non-Hindu claims, Government circular was issued in 2011 prohibiting non-Hindus to participate in the auctions for various leases and licenses to operate shops and also bid to acquire contacts. It stated that "Allotment of shops, buildings / vacant sites in and around the premise (Alaya Kshetram) of Religious Institutions and various License tights in the Temple shall be leased out to the persons who are professing Hindu Religion only and the persons not professing Hindu Religion are prohibited and not allowed to function against the forms, customs and usage of such religious institutions."

The Endowment Circular even stipulates that the Executive authorities should impose the restrictions on the participation of non-Hindus in the auction to lease out shops, buildings / vacant sites, and license rights; and also should not recommend the extension of leases of shops, buildings / vacant sites to any tenants who are not professing Hindu Religion. The Endowment Circular is very clear; that non-Hindus are not entitled to bid for the tender and should not be renewed if they are sitting tenants. The Endowment Minister realizing the brewing trouble, he asked the Endowments Commissioner to cancel the auction. 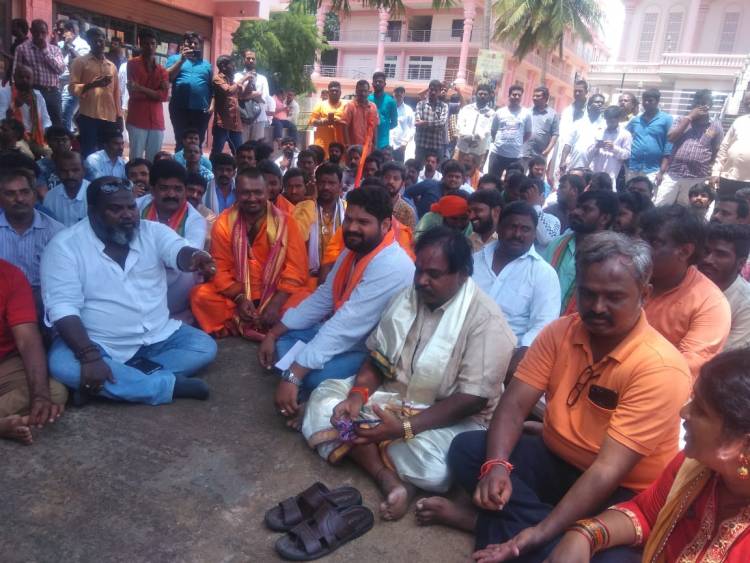 The Executive Officer ignored the Circular and even the High Court directive to restrict the Non-Muslims from acquiring the contracts for shops and other buildings. Because of total rejection of the directives from the Endowment and High Court, the Hindu groups have gathered in Srisailam demanding that all Hindu Temple heed the GO 426 and follow the letter and spirit of the Order. The GO states that "No person professing other than Hinduism as his religion is entitled to obtain lease or license either through tender-cum-public auction or otherwise." In fact, the High Court also decreed that "the individual should fulfill all the tender conditions" as per the GO.

Shiva Shakti circulated a handout informing of the situation in Sri Sailam, how Muslims are given preferences in the tender bids and how Muslims are employed in the Temple. The EO was planning to lease Siddha Ramappa Shopping Complex to Muslims and Christians. The Temple is employing Muslims as Security Guards to protect the Temples and guard it in the night-time. The Contonement built to accommodate Dalits only is being used to provide accommodation for eight Muslim families which are against the Court directive.

The reason Sri Srirama Chandra Murthy is believed to have converted to Islam and even have two wives. He slapped and insulted the High Court by not adhering to the judgment and it is believed that an arrest warrant was issued against EO for his failure to heed the courts' orders. High Court sent several notices to appear at the hearing to answer the complaints that he marries the second wife. He refused to appear in the court.

Astonishingly, the Sri Srirama Chandra Murthy is allowed to remain in the government job, especially as EO of Srisailam Temple. How can the government be so blind and ignore the refusal of the Court's notices to appear? He continued to provide opportunities for Muslims in the Temple. He appointed a Muslim to supply Gas to the Temple. Like this, the EO ignored all the rules and guidelines set forth by the government and High Court.

Many Hindu organizations such as BJP, Shiva Shakti, Bajarang Bali, and other organizations approached EO to postpone the auction. Shuffle ensued and many Hindu leaders were pushed out and dragged them from the office. A huge police force was deployed to disperse a peaceful demonstration. In fact. many of the peaceful protesters were arrested and kept them overnight in jail. Some of the protesters were dragged and removed them forcefully from the Temple area. 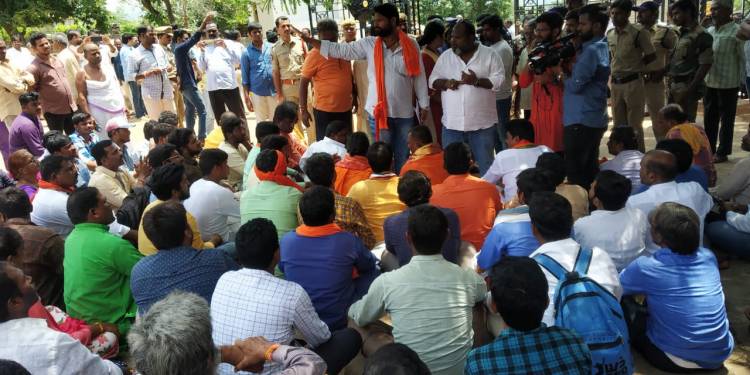 These organizations announced "Chalo Srisailam" march protesting the Executive Officers decision to allow Muslims to participate in auctioning the space for shops on Tuesday (August 19, 2019). Also planned to protest about the appointment of non-Hindus in the Temple. Sensing the potential trouble, a huge police force was being deployed to avert the potential trouble. The Endowment Minister and Chief Secretary of Andhra Pradesh immediately issued GO withdrawing Sri Srirama Chandra Murthy as EO of Sri Sailam Temple with immediate effect. The Chalo Srisailam protest was called off.

Chief Secretary of Andhra Pradesh issued GO removing the EO from the Temple duties. The GO reads that "The services of Sri A Sree Ramachandra Murthy, spl. Grade Deputy Collector working as Executive Officer, Sri Bramaramba Mallikharjuna Swamy Vari Temple, Srisailam, are withdrawn from the Revenue (Endowments) Department with immediate effect." And he appointed Sri K S Rama Rao was appointed as EO of the Temple.

This is the condition of Hindus. Hindu Temples are not operating to provide services to the Hindus, do not employ Hindus to the positions, and deny the Hindus their rightful place in the Temple management. Christians and Muslims have occupied some of the top positions and employing Muslims and Christians instead of Hindus. They are in a mission to either Christianize or Islamize the Hindu Temples and Bharath itself. Many Hindus remain silent and have become spectators. Hindus are mainly responsible for the aggressive nature of Christians and Muslims; and also for their total disinterest in the government to look after the interests of the Hindus and preserving their own culture. Government would not give a hoot as long as Hindus remain docile, silent, secular, indifferent and ignorant.

We salute BJP leadership, especially Sri Budda Srikant Reddy; Shiva Shankti, especially Kalyan Kumar; BJP State vice-president K Kapileswaraiah and Bajrang Dal State co-convener T Pratap Reddy, Sri Srinivasa Nanda Saraswathi Swamy and many others who spent countless hours only to protect the rights of Hindus. Their selfless service is appreciated and admired. Let us all support them and give encouragement for their passion and appreciation to preserve Hindu Temples and Hinduism. 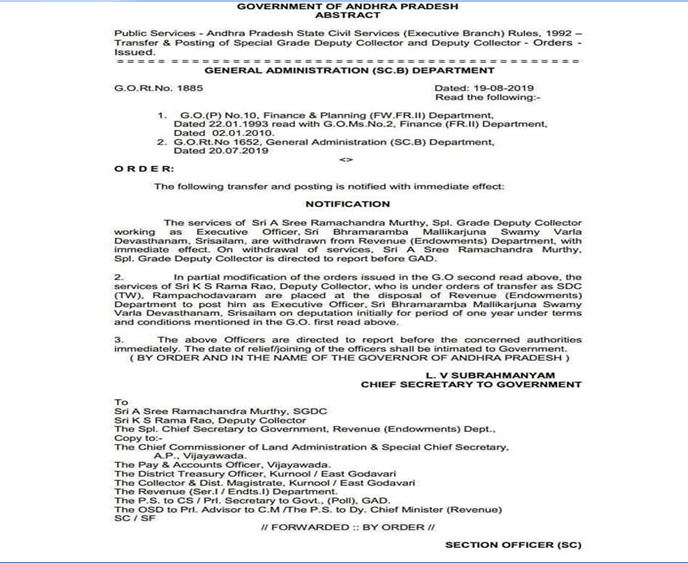 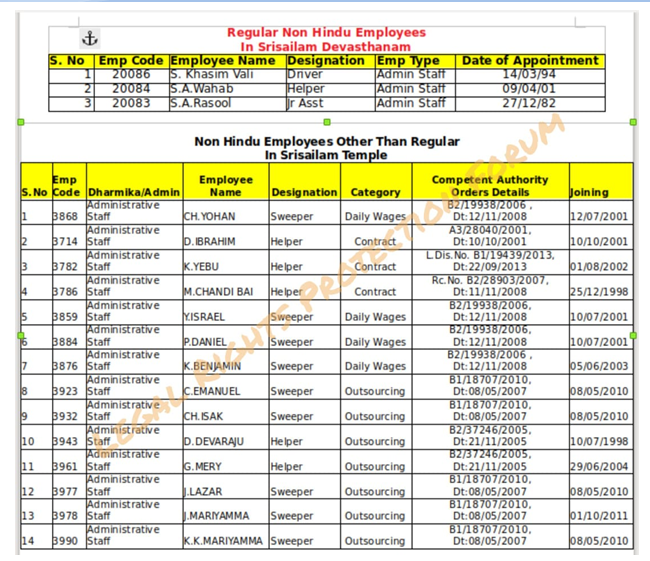 Hindu MPs and MLAs should Wake up, Speak up; prevent Terrorism or become VICTIMS of it soon