“Face the brutes.” That is a lesson for all life—face the terrible, face it boldly. Like the monkeys, the hardships of life fall back when we cease to flee before them. Swami Vivekananda

1) Attend to protest the renaming of Sankaracharya Hill

We request all the Hindus to participate in a meeting being held in New Delhi at JantarMantar on Sunday (March 16) at 11:00am. This is the time for all Hindus to take necessary steps to stop the change of Sankaracharaya Hill to Takht-e-Suleiman Hill. It is a shame that we allow the government to change the name with no historical evidence of Islamic roots at that place. It is a disgrace that Hindus remain quiet without expressing their outrage. By changing the name, Muslims are rewriting the history of India, tarnishing the image of Hindus across the globe, and uprooting the cultural heritage of our history. It is an affront to the richness and grandeur of Sanatana Dharma. The Hill existed even before Muslims came to India. As all us coming to know that the mission of Muslims in India and abroad is to convert India into an Islamic Country. Muslims in Pakistam Bangladesh and India have a plan to break up India into Mughalistan, Dalitisthan and Dravidisthan.  Let us wake up, attend the protest and stop the renaming of Sankaracharaya Hill. 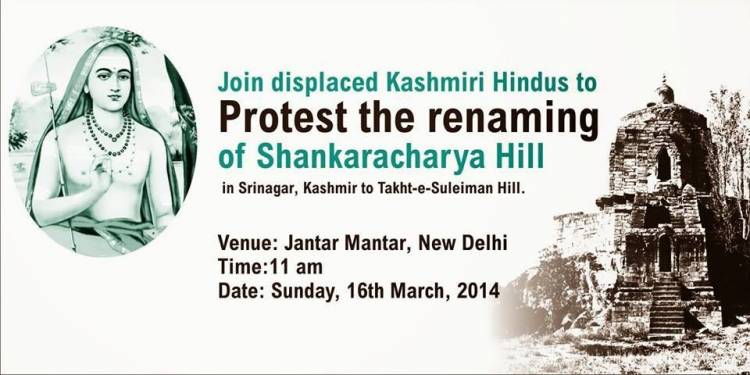 It is high time that Hindus rewrite the history that was distorted and mislead by so-called academic scholars, liberals and Islamic fundamentalists. We heard so many times that Best Offensive is the best defense. We need to take appropriate action to change the names of Hyderabad, Muzaffarnagar, Ahmedabad, Ghaziabad, Zahirabad, Khairatabad, Allahabad, Aurangabad, Mughalsarai, and hundreds of other names, only preserve our culture and cherish the richness of our heritage.

2) Sign the Petition to stop the Renaming of Sankaracharya Hill

The Archaeological Survey of India (ASI) has renamed the Shankaracharya Hill overlooking the Dal Lake in Srinagar,  to 'Takht-e-Suleiman'. ASI has also presented a selective version of history of the Shankaracharya Hill on the tourist information plaque. As for the name of Solomon being associated with this hill, it is based on a spurious and absurd myth claiming that this was a hill once controlled by Jews. Therefore the name 'Takht e Suleiman' or 'Throne of Solomon'.

The structure on the Shankaracharya hill has stood there for centuries before the arrival of Islam in India and yet the plaque makes no mention of it. Instead it says the Mughals renovated the structure. The very name 'Shankaracharya hill' has been in use for one thousand three hundred years since Shankaracharya traveled to the four tips of the country and established SharadaPeeths in all four corners. Any number of reputed Indian, American and European scholars will testify that this was a hill dedicated to Shankaracharya long before the advent of the Semitic people on the sub-continent of India.

This is a shameful act of appeasement to win over innocent Muslims. Politicians are hoping to ingratiate themselves with the Muslims of India by exploiting their sentiments. Any intellectual Muslim will react with anger at such distortions of history. Any Muslim, Jew, or Christian who knows about Jerusalem, knows how the history of every square inch of Jerusalem is hotly contested by the Jews, Christians, and Muslims; and any attempt at re-writing history will be met with deep resentment, anger, protests and violence.

Why are we letting some officials of the ASI beholden to political interests, to re-write history in this sad and shameful fashion?

This will cause a deep rift in the country between Hindus and Muslims. This will be seen as yet one more instance of how the minority is usurping the majority. These mindless acts, though it may seem insignificant at the time, will fester into full blown religious riots, and even wars, in the future. We should stop it now.

Let us stop this by making people aware, whether they are Hindus, Christians, Jews or Muslims, that it does not help any religion if it is a party to lies and deceit.

(The Petition is prepared by Vasan B.K. ; Berkeley, CA)

[GHHF & SIFC] International Conference on Corruption in New Delhi on April 1-2, 2011; Join the movement & save Bharath by rooting out corruption